Drilling down to childhood memories 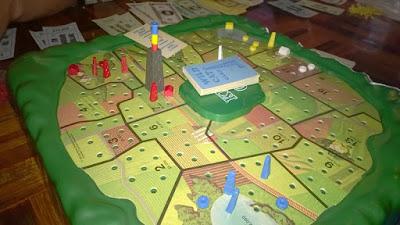 This week's game night featured not a miniatures game, not even a sci-fi or fantasy board game, but an old-school Milton Bradley game from the 1970s called King Oil. The object is to drill oil wells and make money. It's kind of like Monopoly in that you buy and build up properties with a lot of play money exchanging hands, but the uncertainty of whether your drilling attempt will be successful adds some tension to the game. I remember playing this with my cousins at our grandparents house back in the day. Growing up in West Texas among family in the awl bidniss (as Texans pronounce it), I appreciated the theme of this game. 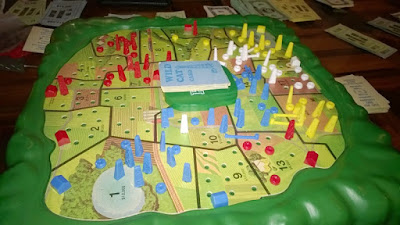 The board is randomized at the start , so you don't know what result you will get when you pick a drilling site. There are three levels of successful well (such as the gusher pictured in the top photo) which cost certain amounts of money, or you could end up with a dry hole, which also costs money and forces you to cap the site. You draw cards to get royalties for each producing well, and maybe a chance to by more properties on which to drill. Once you have enough rigs on a piece of property, you can run pipelines to your opponents' fields, making them pay you a certain amount for each well on their property. It was a nice little nostalgia trip, but I'm wondering how widespread this game was outside the Lone Star State. Anyone else remember King Oil?
Posted by Desert Scribe at 12:08 AM

Nevere seen it or heard of it before! Back in Middle school, my closest freind moved to Houston, and I visited him there for week the following summer. I recall plenty of "grasshoppers", but not this game. :-)

I think the game design is actually older than that - from the 50's or 60's, or earlier. Circa 1979, I played an older edition of it that a friend of the family had in his collection. It had a sturdy thick wood/cardboard board with no plastic (and no hills in relief on the sides), which you would physically shake before play, and mysterious never-seen wooden blocks inside the board would somehow get their positions unpredictably rearranged for play. The metal oil derrick would descend until it found oil one, two, or three levels down. It was a very good game.

Thanks, Pspot. I didn't know the game was from an earlier time.