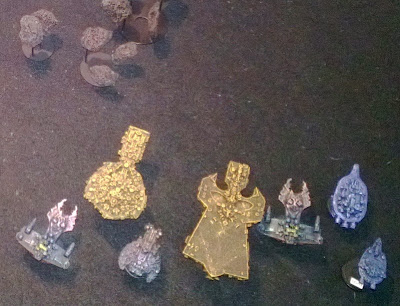 Convention alert:  I will be running a game of 5150: Star Navy next month at MillenniumCon in Round Rock, Texas.  Here's the scenario:

Somewhere Out On That Horizon ...

When the legendary mercenary commander known as Psi Russ falls to an assassin's bullet, chaos reins at the gathering of Free Companies he had called. Before, he was uniting the mercs to take over the galaxy. Now, you and your fellow fleet commanders are at each other s throats. In the confusion, you have time to make your escape ... or to settle old scores.


The game will take place Friday evening, on the first day of the convention.  There's room for up to eight players, and all minis will be supplied.  I hope to see some of you there!
Posted by Desert Scribe at 10:45 PM 2 comments: Links to this post

For our third and final Hordes of the Things game of the day, Holdfast was the defender.  Since he got to place the terrain, he got rid of that lake and river that hampered his mobility.  Because he had left his stronghold at home, I loaned him one of my Mage Knight towers, which made a suitable base for his Empire army against my undead. 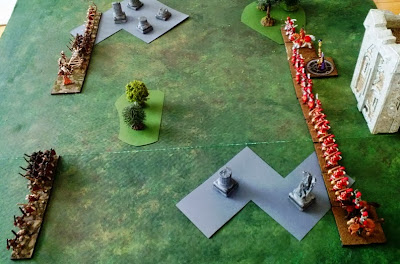 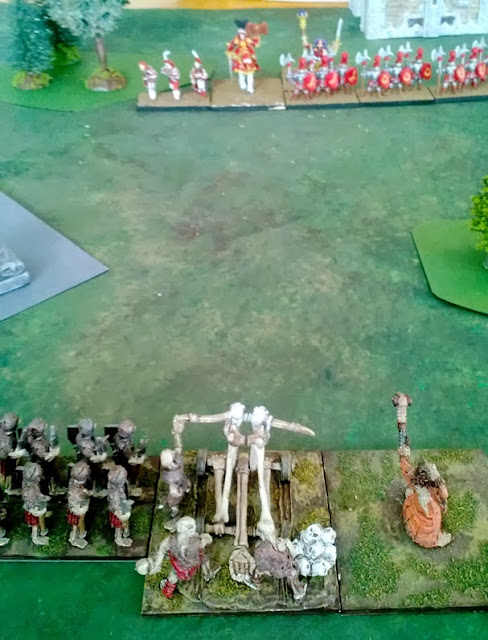 His army, led by his hero general, came straight at my forces.  Unfortunately for my opponent, he forgot that in HotT, artillery quick-kills heroes.  And that's just what happened, ending the game in an unsatisfying manner since I took out his general and inflicted more casualties on him than he did on me.

Because of this, we decided to keep playing as if his magician were the general.  The sorcerer managed to fend off my skeleton warriors, but ended up rolling a second 1 in a bespelling attempt, frogging himself and handing me the victory. 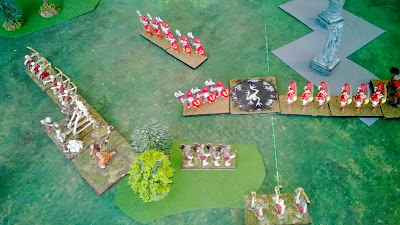 It was a good day of gaming.  I want to play HotT more often.
Posted by Desert Scribe at 7:36 PM No comments: Links to this post

Continuing my recap of a Hordes of the Things gameday from a few weeks ago:

For our second match, I decided to retire my fire army and bring out my undead force.  Holdfast changed his lineup slightly, subbing in a warband for some spears. 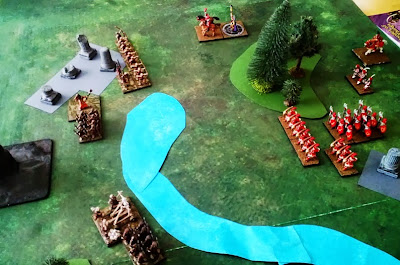 The river placement proved handy, as it forced my opponent to come around to my left with his more mobile forces.  It also brought our respective magician generals his magician and my magician general in range of one another. 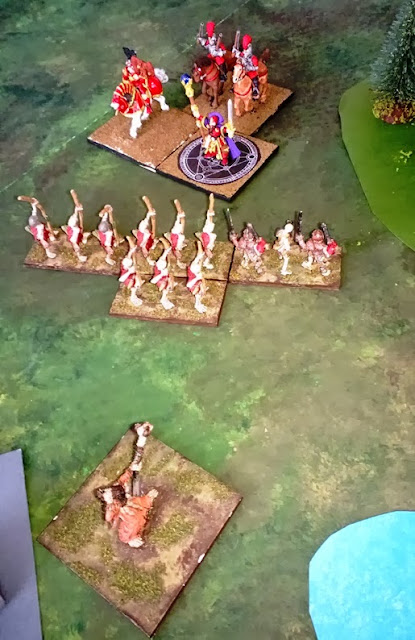 The enemy mage quickly succumbed to the necromancy of my lich, getting himself frogged, and giving me the victory! 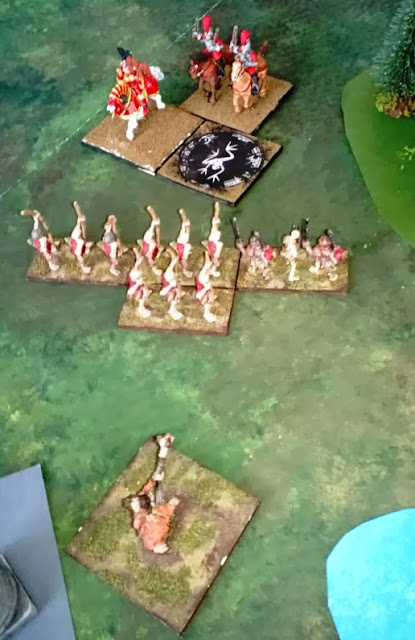 Moral of the story: Don't attempt to bespell a defending enemy magician--unless you have two more magicians of your own to counter that +2 bonus the defender gets while within 600 paces of its stronghold. 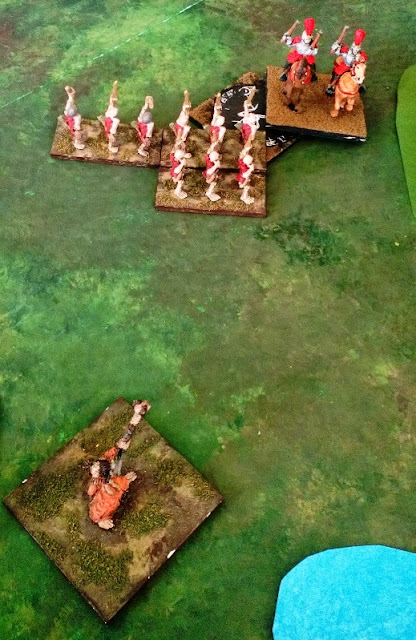 To be continued....
Posted by Desert Scribe at 7:39 PM 6 comments: Links to this post

This is from a few weeks back when Holdfast came over and we played X-Wing and Hordes of the Things.  Contrary to his version of events, he won the first game we played.  Here's how it went down:

My fire army was defending against Mark's League of the Scarlet Falcon.  I set up a river and lake  because I wanted the help against the magician. 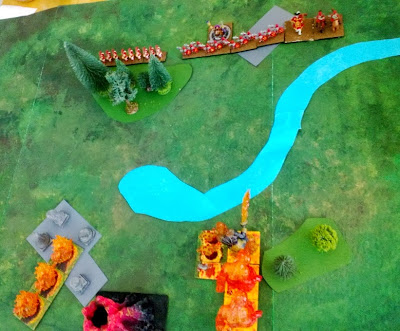 My raging wildfires (beasts) tore into the woods to take on the shooters.  They ended up getting destroyed piecemeal.

Meanwhile, it took forever to get a column of behemoths across the river, and thanks to lack of PIPs, I could only bring one into contact with the enemy.  Since behemoths follow up on recoil, that meant I ended up overlapped. 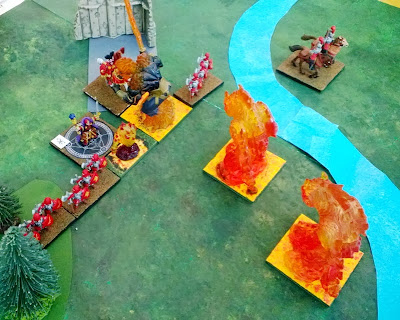 His hero general defeated my hero behemoth general, giving my opponent a victory. 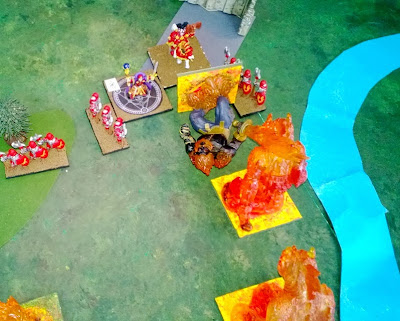 But we still had a couple more matches to play.
To be continued....
Posted by Desert Scribe at 10:06 PM 3 comments: Links to this post 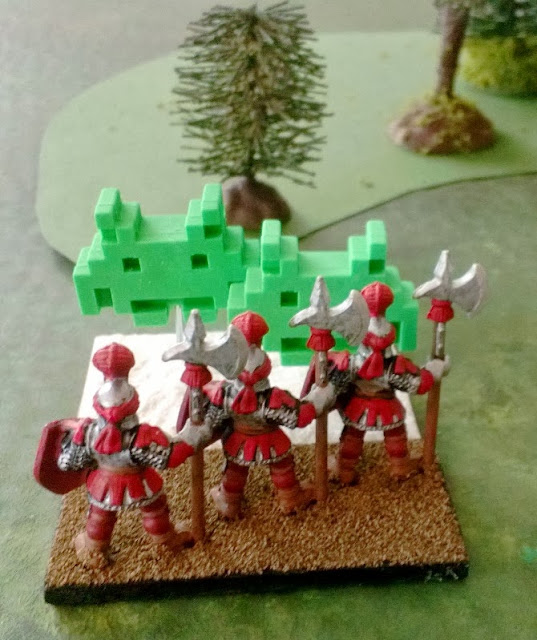 A fliers element of my work-in-progress Space Invaders army for Hordes of the Things squaring off against a stand of spears from Holdfast's League of the Scarlet Falcon (WFB Empire humans).  I found this shot in a bunch of pics from our HotT games of two weeks ago.  I will post pics of  those games later.
Posted by Desert Scribe at 12:51 PM No comments: Links to this post

Email ThisBlogThis!Share to TwitterShare to FacebookShare to Pinterest
Labels: galleries, Hordes of the Things, Space Invaders

Another bout of X-Wing 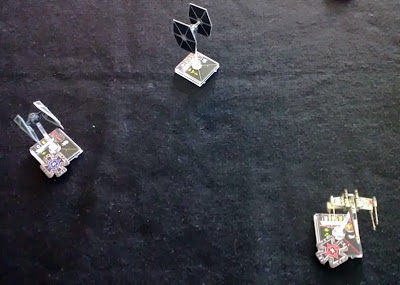 I'm late in posting about some recent X-Wing battles at my house (Holdfast beat me to the punch a nearly two weeks ago), but I wanted to rave about this little minis game.  A couple of weekends ago, I hosted Holdfast and local gamer Kerstan for some fighter-on-fighter action. 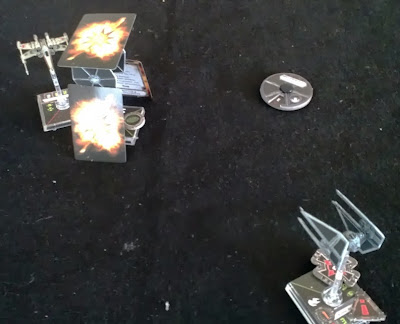 There's some definite strategy to these rules--because players select their movement at the same time using maneuver dials, without knowing what their opponent will do, you need to learn to anticipate where you want to be and where your enemy will be. 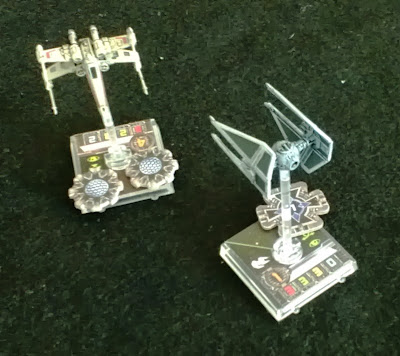 The core set comes with two regular TIEs and one X-wing; but I had picked up an expansion ship, the TIE Interceptor.  Because the ships and their upgrades all have points values, we were able to make it an even match of the X-wing versus one standard TIE and the interceptor. 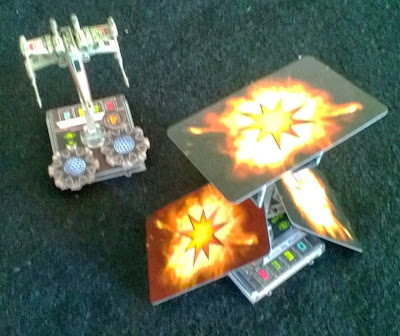 With three of us playing, we rotated fighters after every game.  We were able to get in several matches that afternoon, and the Rebel ship was destroyed in one game but prevailed in the other two.  The game is fast and addictive, and I want to play it again!
Posted by Desert Scribe at 9:53 PM 1 comment: Links to this post

Ed the THW Guy's previews of 5150: Battalion Commander and the upcoming OGRE Designer's Edition have me thinking about 6mm sci-fi.  I was the only bidder on an auction for some 1/285 SF tanks, so I can expand on my collection of OGRE/GEV minis.

I scored two heavy war machines from the MAATAC line of miniatures, as well as a pair of Conqueror Mark 1 Heavy Tanks from some outfit called "The Weapons Shops of L.A." that shared the same address as In Service Miniatures of Lakewood, California.  Here's a size comparison with some of my OGRE vehicles in front (from left: Combine missile tank, superheavy, and heavy tank). 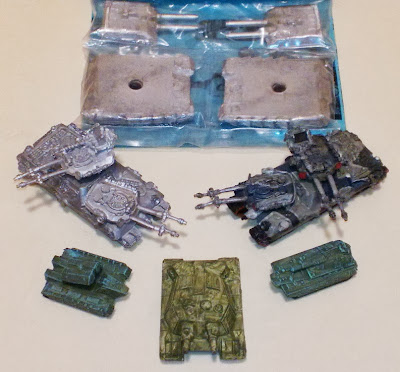 As you can see, these new vehicles are pretty massive compared to the conventional armor from OGRE.  They would fit in nicely as other factions' superheavies or larger cybertanks.  These minis also have me noticing that there's no Two Hour Wargames rules for massive tank battles just yet. 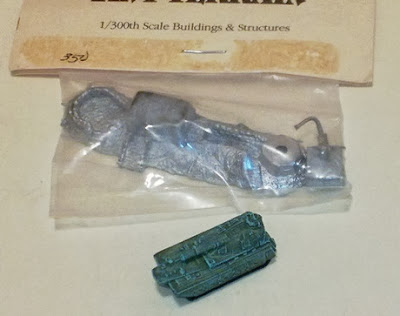 Also included in the ebay lot I won: a 1/300 scale fortification, part of the Tiny Terrain line by  the now-defunct Simtac, Inc.  This will come in handy for future tank battles.

Yep, I want to play some massive tank combats now ....
Posted by Desert Scribe at 9:39 PM 3 comments: Links to this post