Saturday night, I brought out my work-in-progress Monopolis scenario for Ogre for a trial run.  I'm grateful that Joe hosted the game; his game table was big enough to hold the large hex mat, with a little room left over.  My thanks to the two other playtesters as well, Marc and the second Joe.
Here's the city on the eve of battle, with rubble borrowed from the host: 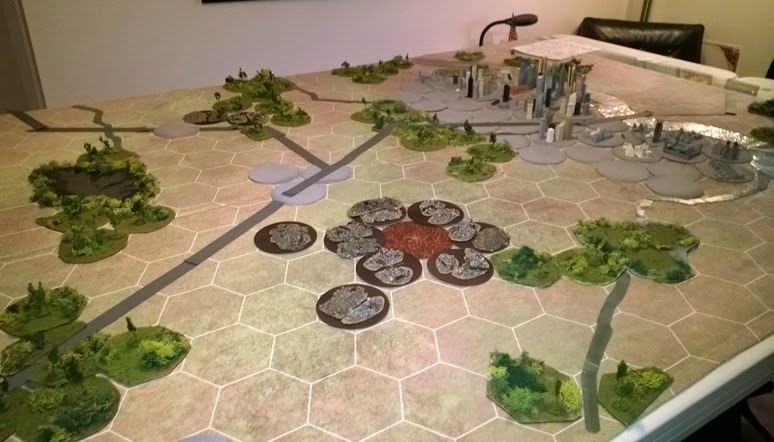 I still have lots of unpainted infantry, as you can see from this image of the attackers coming on to the board.  I do have all my forest terrain finished. 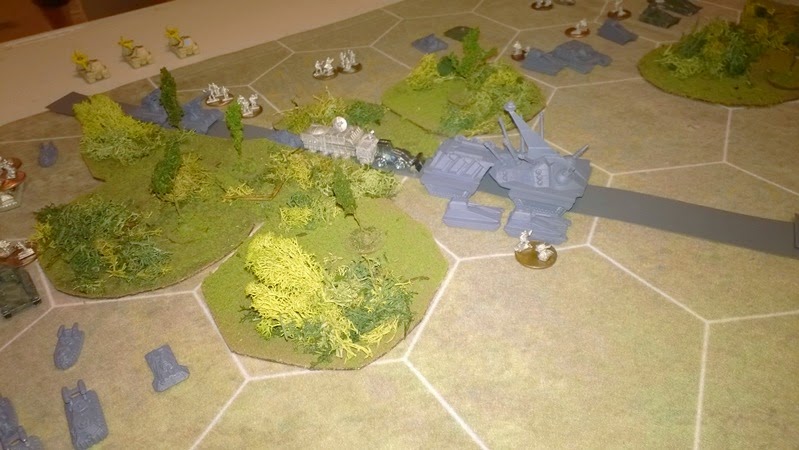 Since I don't yet have markers to indicate minefields, I used pennies. And I still have some city terrain to complete, which is why there are unadorned gray discs among those with buildings attached. 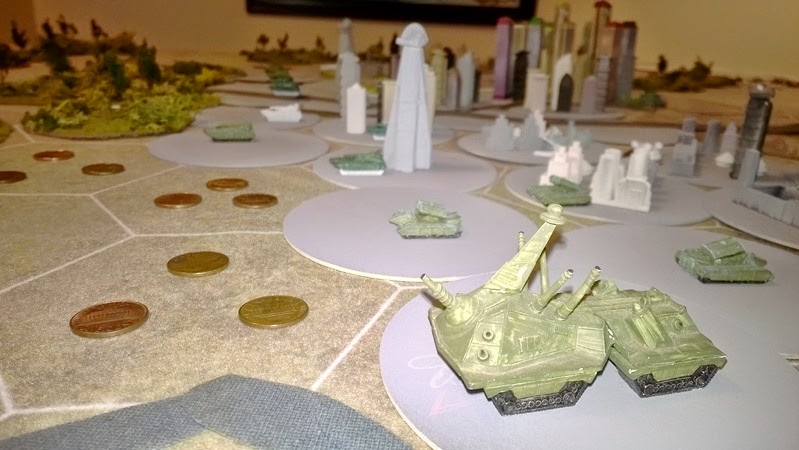 My smoke markers (for indicating damaged terrain) need painting as well, and I need to finish my rubble terrain, which right now is painted black and brown but doesn't have rubble glued onto it. 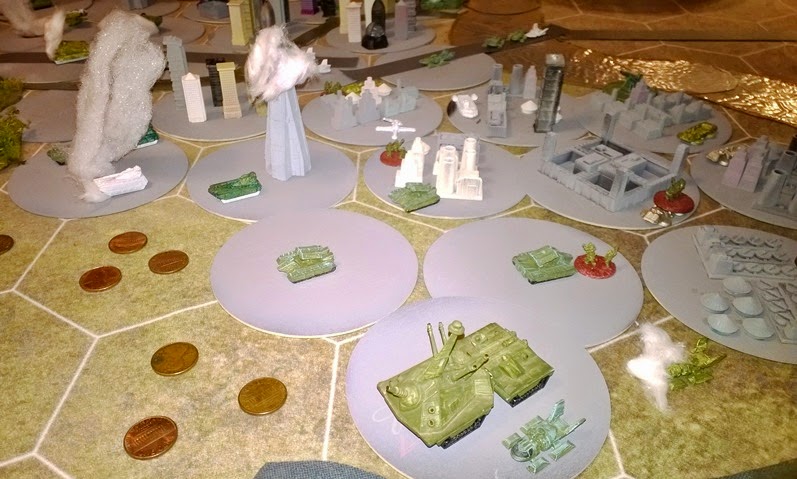 As for the game itself, it was two on two, with one player on each side who had never played Ogre before.  They both picked up the game quickly, and were soon moving and shooting like old pros.  The other player had a couple of games under his belt, and I was the fourth player.  We played for over four hours before calling the game, with the attackers making their way into the city, but with the defenders still holding a lot of territory with a nearly intact Ogre. 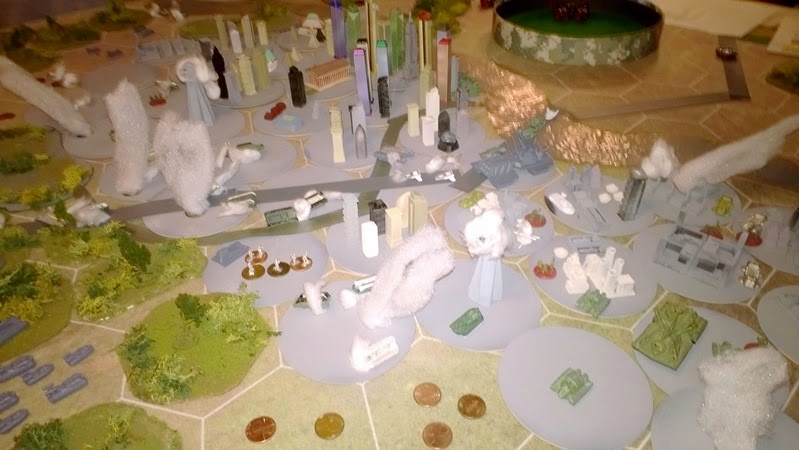 I learned some valuable lessons thanks to this playtest: Instead of starting the attackers at one end of the map, I need to allow them to set up closer to the city--otherwise it takes too long for the forces to come into contact, and time is a factor in convention games (not to mention I don't want to bore the players for the first several turns).  I also plan to cut the forces in half; it takes too long for everyone to decide what they're gonna do and then get it done if they are in charge of more than two dozen units at a time.
Posted by Desert Scribe at 8:40 PM 2 comments: 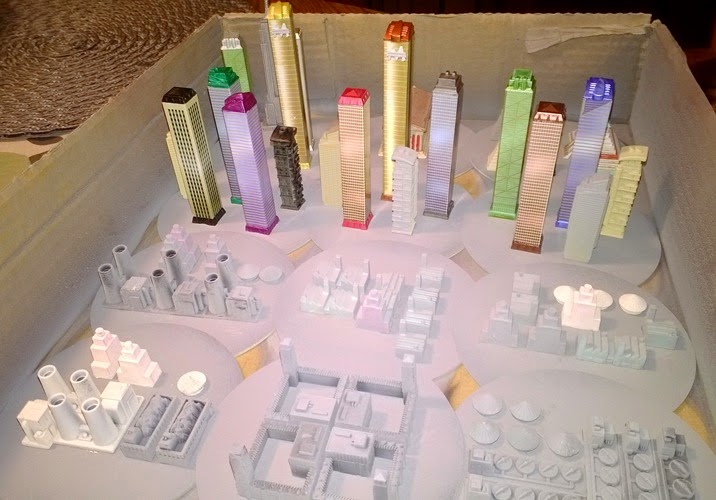 Yeah, it's been a while since I've blogged.  Just busy with life and all that.  Some gaming news: I'm halfway done assembling my city for my game convention Ogre scenario, and I thought I would share this sneak peak.  You can see the downtown skyscrapers and industrial areas, including power plants, sewage treatment, and a large prison complex.
Posted by Desert Scribe at 3:03 PM 3 comments: 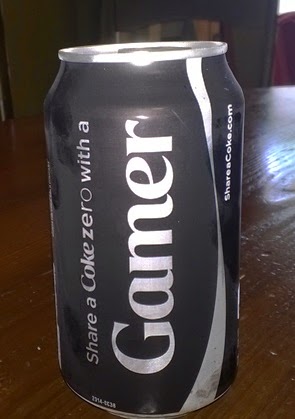 Sorry about the lack of posts; my laptop was mostly dead for the past month.  I haven't done much gaming, or even worked on game stuff lately, because of travel and for various other reasons, but I'm still a gamer at heart.

I did get a chance to play some OGRE every now and then, but I still haven't been able to keep the eponymous cybertank from destroying the command post.  I hope to report some progress soon.

I do want to mention that the Slumbering Ursine Dunes adventure kickstarter (which is a part of the Hill Cantons campaign) has just a few days left.  It's fully funded and well into the project's stretch goals.  Go check it out and pledge while it's still open.
Posted by Desert Scribe at 8:45 PM No comments: