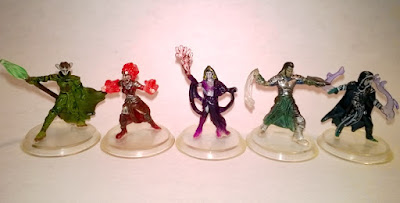 I've got plenty of warrior-types for games on my new battle board, but not many spell casters, so I remedied that with set of prepainted figures from Magic: The Gathering: Arena Of The Planeswalkers. These are not the stereotypical mage figures that I grew up with, but they will go well with my HeroScape mins for Melee or Wizard scenarios. I also like the fact that they're already painted. Am I the only one that games with prepainted miniatures?
Posted by Desert Scribe at 9:04 PM 3 comments:

Email ThisBlogThis!Share to TwitterShare to FacebookShare to Pinterest
Labels: Arena of the Planeswalkers, Melee, The Fantasy Trip, Wizard 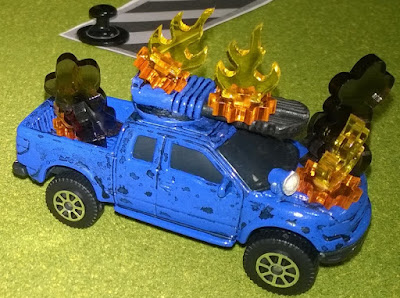 Last week when I asked my wife if she wanted to play a game with me, I was pleasantly surprised when she requested that we play Gaslands. She took the team Born To Be Wild, while I played Blues Brothers. 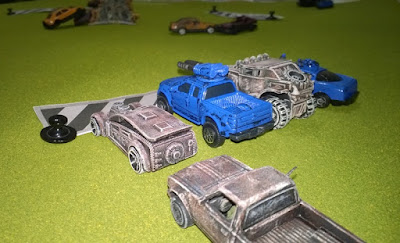 The scenario was Death Race, and with no weapons till going through the gate, my spouse took advantage of the huge tires of the monster truck Heavy Metal Thunder to run over Elwood. 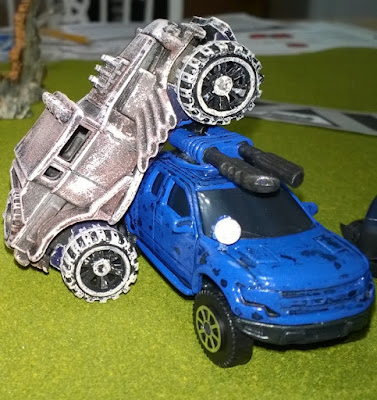 My pickup still managed to reach the first gate before anyone else, and used its arc lightning projector to take out Smokin' Lighting, while slightly damaging my teammate Jake. 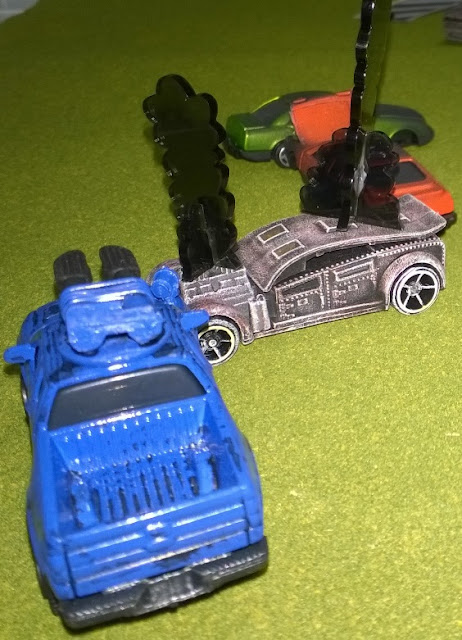 Jake then swung around wide toward the second gate, while Elwood rammed Heavy Metal Thunder. 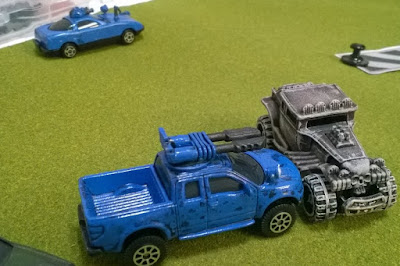 Of course, my pickup was done for the turn, and the monster truck was able to crush it again. 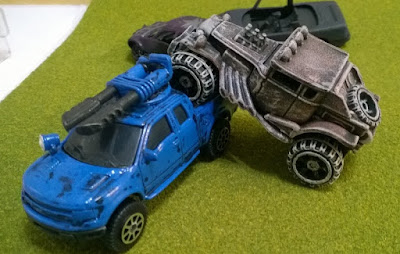 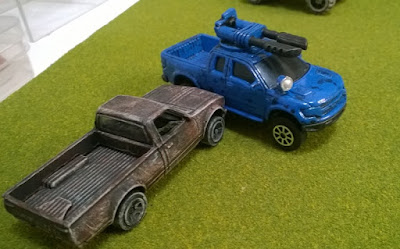 This was enough to wreck Elwood, which of course exploded!

The blast damaged Motor Runnin' and sent it out of control, where it slammed into Heavy Metal Thunder! 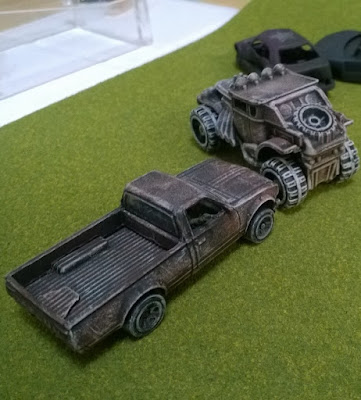 With those two vehicles tangled up with each other, there was nothing stopping Jake from reaching the finish line, so we called the game. 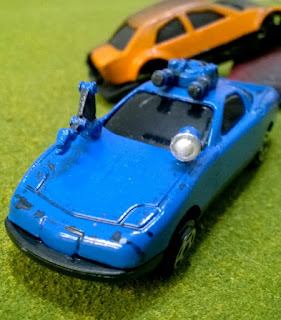 It was a good time playing, although it took a little longer than my wife preferred. Still, she had fun and said she will play again someday. 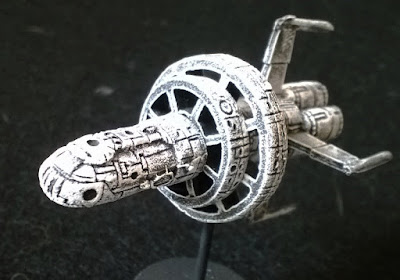 For the first time, in a long time, I painted up a spacecraft mini. 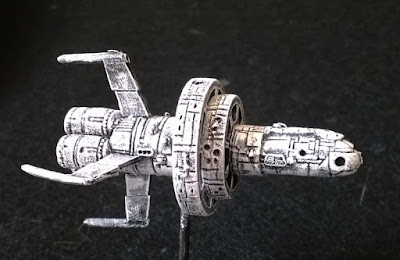 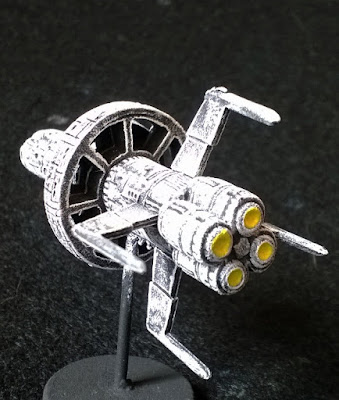 Counter-rotating sections of the vehicle used centripedal force to simulate gravity for passengers and crew. 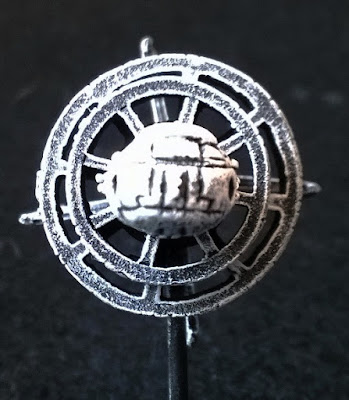 Although the sublight engines were eventually replaced with a Bachman-Turner overdrive for interstellar travel, it was not cost-effective to retrofit with agrav. 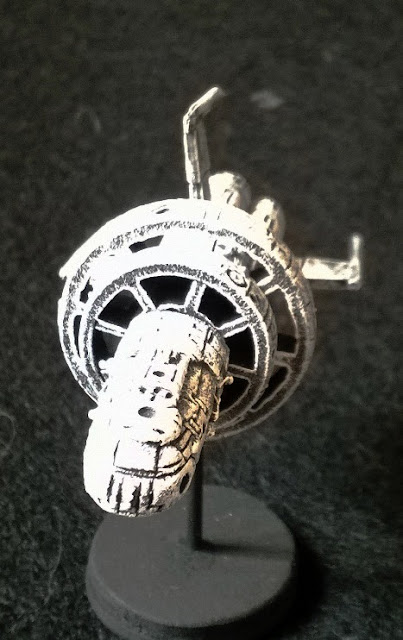 Although the photos are a little washed out, all in all I'm pleased with this nice little model that would not look out of place in a game of Galactic Knights.
Posted by Desert Scribe at 11:59 PM 7 comments: 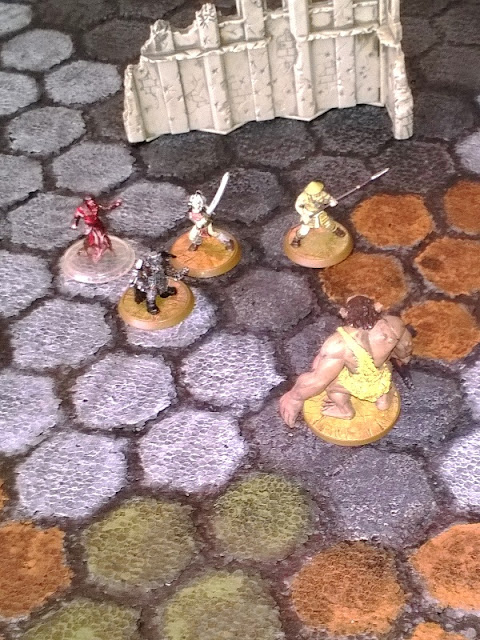 I finished up that big game board for Melee/Wizard that I had been working on recently. It's a hex pattern on a 2' x 4' sheet of styrofoam. It's a little bulky to move around, but more convenient then assembling and disassembling HeroScape hexes like I've been doing. Here is the map in all its glory: 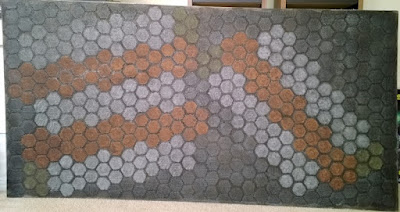 With the Wizard arena on one side and the Melee arena next to it, I can run gladiatorial contests or some solo adventures. (Although I noticed once I was done that if I had started my Melee map one hex closer to the edge, I could have had a row of hexes separating it from the Wizard map.) Or I can ignore the hex colors for some larger scenarios of my own devising. 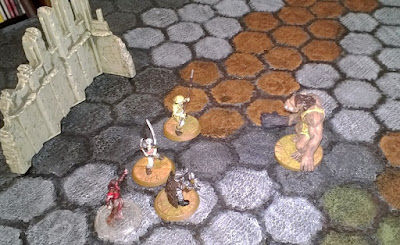 First I think I need to create a few warriors and spell casters and try my hand at Death Test. Or maybe I should start on a different gaming project--wouldn't it be great if I could complete more than one minis-related enterprise with all this time spent at home?
Posted by Desert Scribe at 5:44 PM No comments:

The packaging from a recent purchase of furniture for the home office left me with a huge sheet of thin styrofoam (some two feet by four feet) that just begged to be used for gaming terrain. I decided I needed a large playing surface for use with games of Melee and Wizard. I've played before on Heroscape tiles, which look good but take some time to set up and break down. So I decided to use those tiles to imprint a hexagonal pattern onto the sheet. 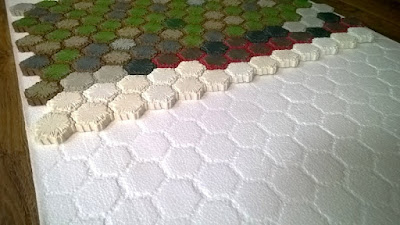 After that, I coated the styrofoam in a mixture of white glue and water for protection before spraying it black. I didn't coat the sheet thoroughly enough, because the aerosol ended up dissolving some of the foam. It made a nice texture that looked nice with some drybrushed gray, so no big deal--but I did add another coat of water-glue mix after that. 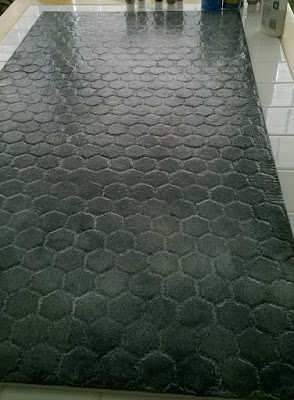 While I want this terrain piece to be versatile, I also want to use it for battles based on the arena maps from the original Melee and Wizard. Toward that goal, I replicated those patterns on my game board, which is just big enough to fit the maps from both games. Then, because the colors were so bright, I gave everything a dark wash to blend the hexes back together. You can see the Wizard arena on the left, and the Melee map to the right. Entry hexes are dark green and hard to make out in this picture; I plan to drybrush them with a lighter shade to make them stand out more. I will get more pics once it's done. 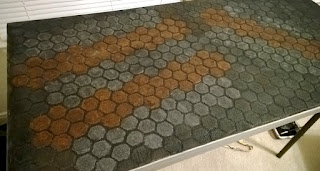 It's not much in the way of gaming projects, but I'm happy to be getting something done while on lockdown. I hope everyone is staying healthy, and we can all get together to start rolling dice and pushing around minis again someday.
Posted by Desert Scribe at 11:24 PM 4 comments:

Games in the time of coronavirus

These are weird times for everyone: Global pandemic, mandatory isolation, economic recession, toilet paper shortage, and probably, sometime soon, locusts. Thanks to this disease, my regular gaming location, Dragon's Lair, is closed, and the second annual FnordCon, set for this weekend, got canceled. But I can't complain; my wife and I are lucky enough to still be working, and our pantry's full. So I thought I would see how everyone has adjusted their gaming in this season of uncertainty. With face-to-face gaming with my regular group not an option for the foreseeable future, I'm trying to get my geek on at home. My wife and I have been playing The Awful Green Things From Outer Space, teaming up as the crew and using some semi-random mechanisms to conduct the monsters. We still haven't managed to completely defeat the critters, but she enjoys playing it with me, and we both appreciate the quirky art. 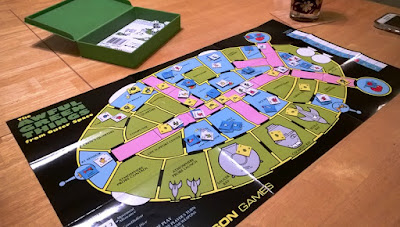 My spouse isn't, however, as big a fan of Terraforming Mars, so we've only played a single game together. Luckily, the solo rules for this board game are enough to keep me coming back again and again. While I miss having multiple opponents, it has a lot of entertainment value as I try to meet the victory conditions. And I'm using the Prelude, Venus Next, and Colonies expansions to get even more mileage out of TM. 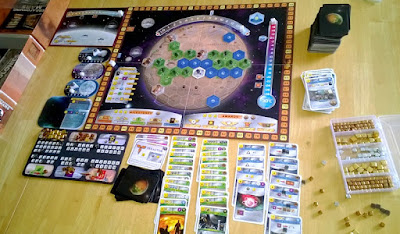 I haven't done anything minis-related, but I may try to start working on some Ogre minis soon--or maybe I will paint up some of the scatter terrain or fantasy minis I have piled up. Maybe I can get something ready in time for the next game convention, whenever that may be. What about y'all? How are you adjusting your gaming to the new normal?
Posted by Desert Scribe at 10:16 PM 1 comment:

Email ThisBlogThis!Share to TwitterShare to FacebookShare to Pinterest
Labels: board games, Terraforming Mars, The Awful Green Things From Outer Space 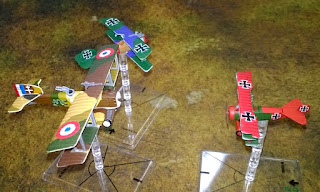 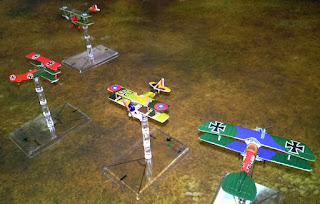 Gameplay is a little like X-Wing, with simultaneous movement from templates--but you pick three moves at a time, and shooting is resolved by card draw (everything from no damage to pilot wounded to kaboom). It was a good time, even though I got kaboomed.
Posted by Desert Scribe at 9:06 AM 3 comments: