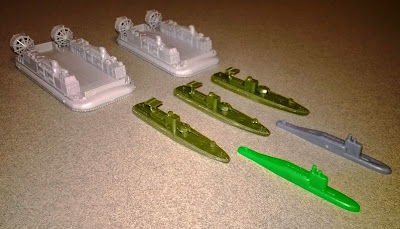 I'm taking my Ogre games to sea. Eventually. Here are some naval units for some amphibious action. The have rules that are a little more complicated than conventional land armor, but like the superheavy tank, the vehicles listed below are affected normally by results of D or X on the Combat Resolution Table.


Armored Boat: The Armored Boat is a human-crewed watercraft designed for use on rivers and costal waters. It gets two attacks per turn (one equivalent to that of a heavy tank, and one equal to that of a missile tank) that can be combined if desired. It can also launch a depth charge attack at strength 3 against a submerged target in the same hex once per turn.

LC-GEV: Each Landing Craft-GEV can transport up to two companies (24 squads) of infantry or two armor units (for example, two heavy tanks, four light tanks, a missile tank and two light tanks, etc.). Alternatively, it can carry whatever models fit into its bay. LC-GEVs can only enter a land hex to embark or disembark cargo. Loaded LC-GEVs do not get a bonus for water movement.

Submarine: While submerged, a submarine can launch a single Ogre-type missile attack against a surface target or another sub. It can also shoot a torpedo salvo against a nearby submarine or boat. Submarines have a defense of 6 against surface attacks from Ogre-type missiles and howitzers, and all such attacks are at half strength. Subs have a defense of 3 versus depth charges, torpedoes, and marine infantry. No other unit can attack submarines.

If you use any of these in a game, please let me know how it does.
Posted by Desert Scribe at 9:00 AM 4 comments: 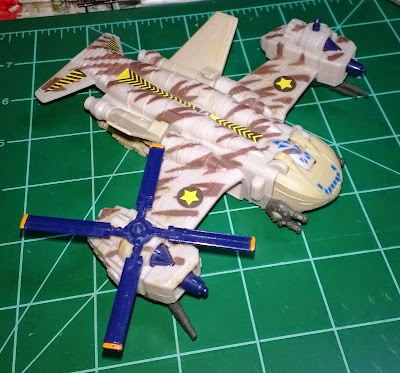 Picked up this model from eBay to use as terrain, an objective, or even a vehicle in my sci-fi tank battles such as Ogre.

This monstrosity is called the Thunderwolf heavy lift helicopter, and it's from the Mega Force line of toys by Kenner that came out in the early 1990s. (I have a few other vehicles from this range; they make great additions to your 6mm scale armies.) 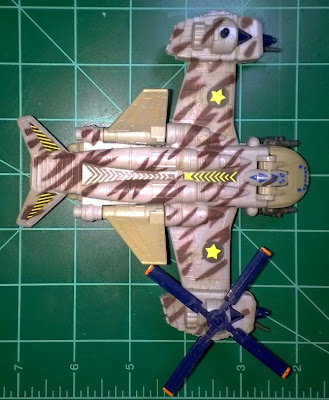 In my games, it will portray a heavy vehicle transport. Since this one is missing a rotor, I will probably take off the remaining blades (as well as the improbably large gun turrets) and call it an ekranoplan--which fits in nicely with the lack of strategic air capability in the Ogre background. 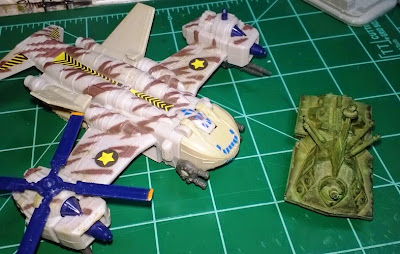 As you can see, this thing is huge--it makes a Mark III Ogre look like a dwarf! However, it can carry only a couple of conventional armor units at a time. 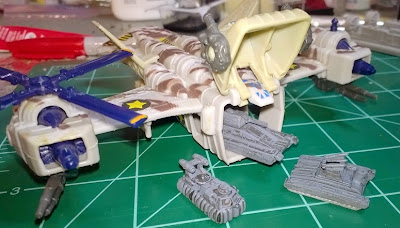 If I used this vehicle in a game, I'd give it GEV movement of 4/3--but only on water. I would also make it fairly tough because of its size, maybe a defense of 3. If it's destroyed, so is whatever it was carrying. I'll even throw in a couple of antipersonnel guns, but this is a transport, not an attack craft. 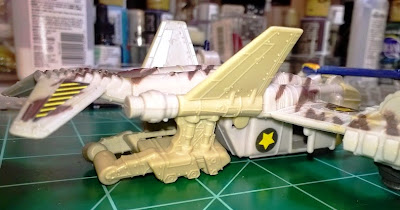 Or I may just put it on the map as a scenario objective. Maybe it's carrying modules to build a prototype Ogre that each side wants to capture. And maybe the Ogre's partially functional ...
Posted by Desert Scribe at 11:05 AM 9 comments:

A couple of weeks ago, we got together for food and gaming to celebrate Joe's birthday. In order to accomodate more than a half-dozen players, we ended up playing Axles & Alloys, a vehicle combat game based on Full Thrust. 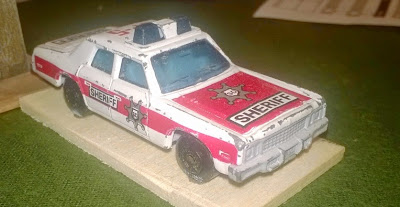 Vehicles were equipped with weapons like machine guns, oil sprayers and even spike- or napalm-droppers. We lined up with the idea of seeing who could make two laps around the track, but over the course of the game, no one got further than a quarter-lap. Everybody was too busy shooting at everyone else. 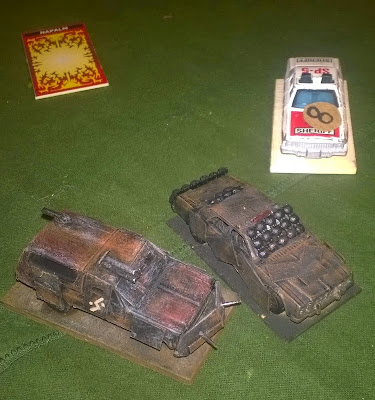 Blake modified a bunch of die-cast vehicles straight out of the box, and there were a few more works-in-progress. 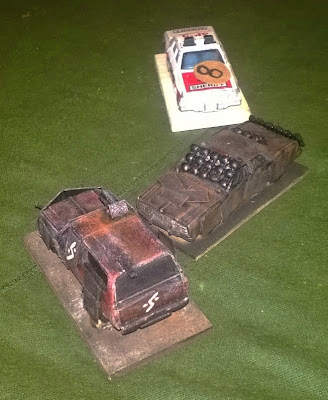 I took the cop car, naming it the Black & White & Red All Ova, and calling my driver Inspecta Specta (I was going for a Wu Tang Clan vibe). 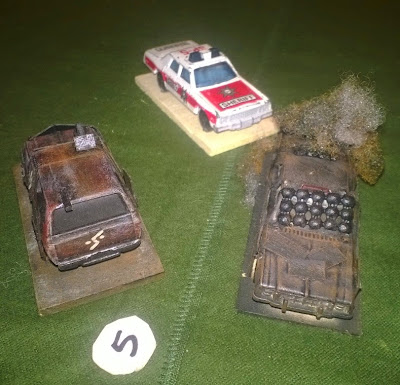 Straight out of the gate, the mayhem ensues. Eventually, after shooting I get a chance to ram some vehicles that got in my way. The collision takes out one car and kills the driver. I then reverse to hit another car and take out its operator too. The resulting fireball kills my driver as well, before the first turn. 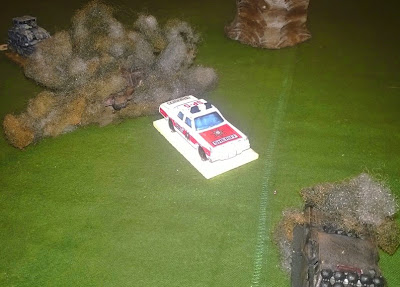 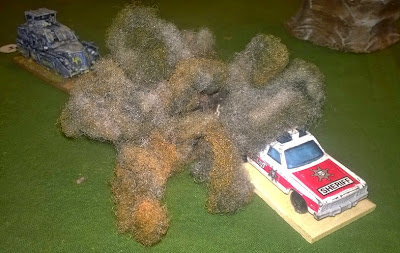 It's a fun game, and after seeing Mad Max: Fury Road, I have the urge to buy a bunch of Hot Wheels and convert them to post-apocalyptic battle wagons. What a lovely day!
Posted by Desert Scribe at 10:40 AM 2 comments: 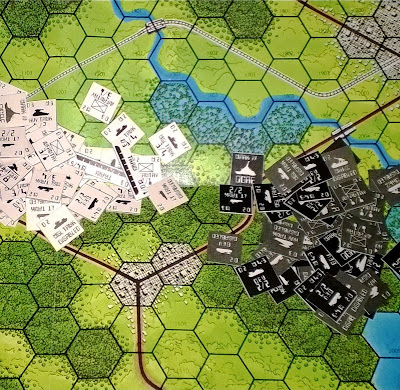 With the release of Pocket Ogre, Steve Jackson Games gave fans a classic version of the old sci-fi tank game, with retro counters, retro map, and retro price. And it comes with plenty of counters to play the scenarios in the rulebook or to create your own.

There's talk of releasing the sequel to that game, GEV, in a similar format, but with the price adjusted for inflation to around ten bucks. So what counters should they include in this edition?

Since Pocket GEV will cost about what it cost to make Pocket Ogre, the sequel probably will include the same type of components as the earlier game: two die-cut counter sheets, a map on non-glossy paper, and a rulebook. To further keep costs down, I'm going to assume that SJG will use the same die pattern they employed to cut the Ogre counters, giving us 70 chits per sheet.

So with 140 counters, the game needs to include enough of each unit type to play all the scenarios included in GEV. It also needs to include all the units introduced in the original rules: light tanks, mobile howitzers, and trains. I also want to bring in a couple of units introduced in later supplements that don't require any new rules: light GEVs and superheavy tanks.

Taking all that into account, here's my suggested counter manifest (per sheet) for the proposed Pocket GEV:

So multiply the above by two, and that's the counter mix for my hypothetical GEV. With this loadout, a single copy of the game gives you enough of the specified counters to play all the advanced scenarios that came in the original GEV rules. It also includes the same number of Ogre counters as the first edition. Since we can't change the shape or size of the counters (we're stuck with the template from Pocket Ogre), the train requires a slight workaround: use two counters with the same speed to represent the train taking up two hexes.

Granted, there are not a whole lot of the newer units, but there are enough to give players some options. And at $10 apiece, a second copy for more counters isn't unreasonable. I think this roster will work, but I might have missed something. What units do you think Pocket GEV needs more (or less) of?
Posted by Desert Scribe at 4:50 PM No comments:

Some additions to my Ogre/GEV forces--on the miniatures front and in the way of counters. First, these die-cast vehicles from the old Kenner Mega Force line will serve as cruise missile crawlers. I already have some of these in use, and I think I will strip and repaint my newest models in a different color for use by opposing forces. Anyone else incorporate toys into their minis games? 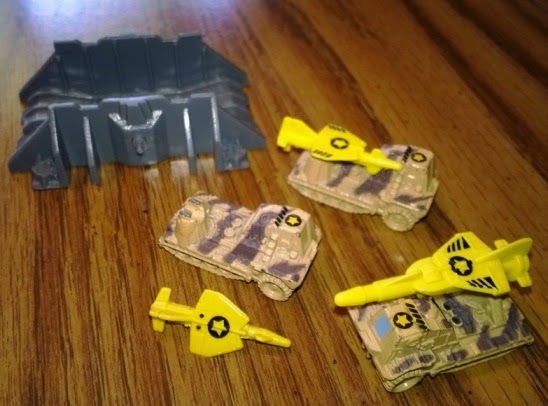 Next, these old-school counters writ large. These classic-style pieces for the Ogre boardgame are one inch on a side and meant for use with the large hex maps from the new Designer's Edition. However, I have a couple of paper maps from the out-of-print Deluxe Ogre and Deluxe GEV minis sets, and the counters will fit with those maps as well. Just like the pocket edition of the game, but bigger! 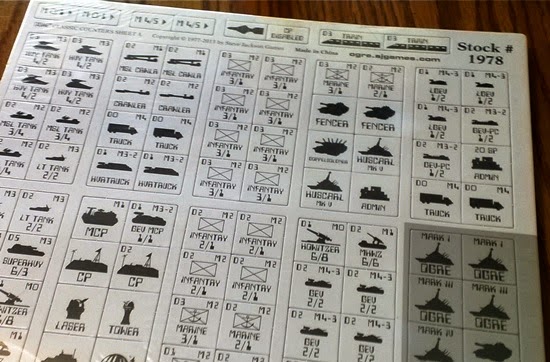 So I will be able to play Ogre in a variety of formats. Now to line up an opponent for a game. ...
Posted by Desert Scribe at 11:29 AM No comments: