A trip to Muspelheim 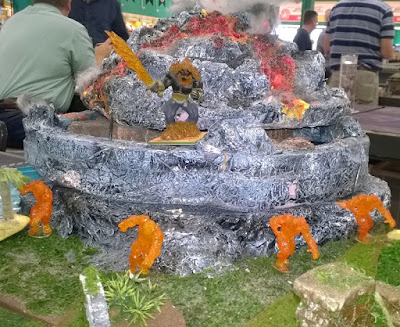 Recently the Heritors exploring the Ghost Archipelago heard of a possible mapstone located on a volcanic island far to the south, called Muspelheim. The mapstone was found in the body of the fire giant Surtr, who dwelled in the volcano, surrounded by the Sons of Muspel. 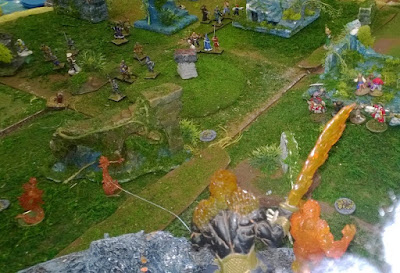 This was a scenario I came up with and ran for our group recently. There were three players (my warband sat out since I was running the game). While Surtr didn't leave the volcano, the Sons quickly set out to drive off the trespassers. And while Surtr remained on the mountain, he threw fireballs at the approaching crews, fireballs that ignited into fire demons if they missed their target. 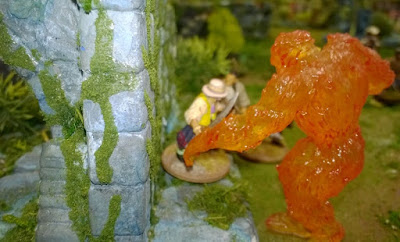 Players also summoned some wandering creatures through spells, and the critters joined the Sons in attaching crew members. The Pool spell did take the steam out of the Sons of Muspel, who didn't get along very well in water. 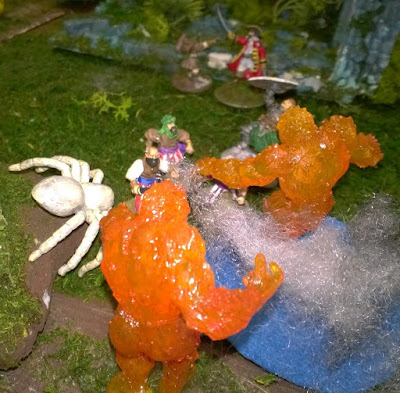 While some crews engaged the Sons in hand-to-hand combat, it didn't go well for them. 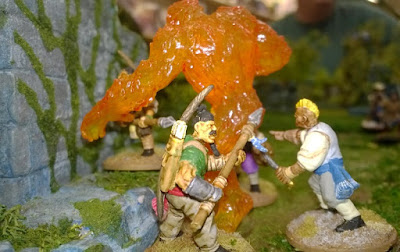 Perhaps it was smart of them to keep their distance from Surtr himself, who was very powerful in combat. Instead, the crews volleyed arrow after arrow into the fire giant, finally bringing him down from afar. 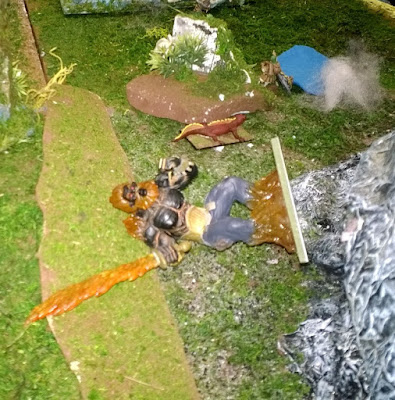 I enjoyed getting these minis out on the table, and it was a good time running the scenario.
Posted by Desert Scribe at 10:49 PM 5 comments: Links to this post Almost time for this month's edition of my quasi-narrative Monopolis campaign for Ogre, so here's last month's battle report! The scenario this time was an attempt by a convoy with vital supplies to reach the besieged city to help them hold out until allies can arrive. Unfortunately, the transports blundered into an equally unaware occupation force guarding the road. 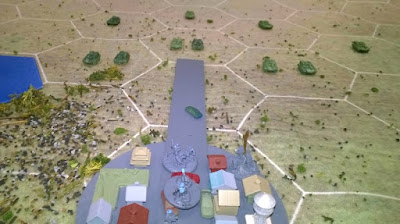 This was an infantry-heavy scenario: The occupiers consisted of an infantry regiment (27 squads regular infantry and 3 heavy weapons squads), with one howitzer in support, to prevent supplies from getting through. The convoy had two battalions of troops (20 squads regular and two HW teams) with an escort of 10 light tanks--plus the trucks, hovertrucks, and Oversized Pallet Parcel Engineering vehicle to get across the table. 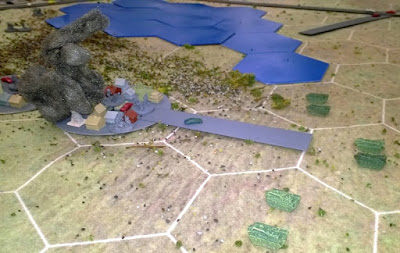 Shout-out to my players, Albert and Wes, who gave me backstories for the forces they commanded. Albert's occupying force was Wayne's Irregulars (mercenary company, traveling circus, fortune tellers--pants optional). Wes's supply convoy was Bane's Blockade Runners (no motto). The convoy entered in waves, with the light tank squadron advancing on the infantry holed up in the small town near the start of a major road. While that infantry was taken care of quickly, the howitzer did a number on the armor units. A couple of turns later, and the last of the convoy entered on another road, mostly out of range of the artillery. 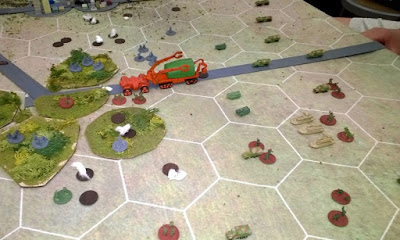 In game terms, the heavy transport had tread units like an Ogre Mark III, plus two antipersonnel guns. It was able to charge through the the infantry without losing too much locomotion, and even though there were still plenty of squads on the map, the enemy couldn't keep up--especially since the way I laid out the map left long, open corridors at both ends. I was thinking that in most of my games, the terrain at the edges never matters because most of the action takes place in the middle. Obviously, I thought wrong, because once they convoy got past the foot soldiers on this side of the board, there was no blocking terrain to allow the occupiers to catch up. 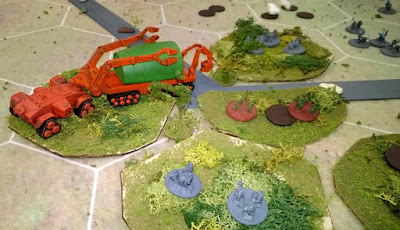 While the convoy lost more than half its infantry and 70% of its tank escorts, all but one of its vehicles made it off the map. The blockers lost less than one-third of their infantry, but overall they failed in their mission. Still the players said they had fun, and they provided helpful feedback on the scenario. Next game I will fix the terrain so that the convoy doesn't have a straight shot, and I will also have the convoy declare the map section the large transport comes in on, so the occupiers have some idea where to set up.
Posted by Desert Scribe at 8:35 PM No comments: Links to this post