Off defending the Commonwealth

You might have noticed my blogging has been sparse lately. I blame my wife, who got me a videogame system for my birthday. I've been playing Fallout 4 over the past few weeks, and I'm having a (nuclear) blast.
If you're a videogame fan, you know what I'm talking about. For you old-school analog gamers, it's pretty much a sandbox, slightly less gonzo, Gamma World-style exploration game, where you roam across a nuclear-ravaged Massachusetts some two centuries after an atomic war. You gain skills and levels while making alliances with various organizations. Or you can go around just shooting things. Just like when we played GW back in the day.

Either way, Fallout has me craving some post-apocalyptic tabletop minis gaming. For rules, I want something a little more rules-light than Gamma World and a lot more miniatures-focused. Something like Mutants and Death Ray Guns from Ganesha Games, or maybe something adopted from one of Ed's Two Hour Wargames rulesets, like After the Horsemen.

I already have plenty of prepainted Heroscape minis I can use for skirmishes, and I'm sure I can track down some Clix prepaints for various purposes as well. And Gunbird's blog 20mm And Then Some has lots of inspiration regarding terrain for Fallout games.

Anyone else doing some After-the-Bomb gaming? If so, what rules do you recommend? Also, what minis?
Posted by Desert Scribe at 7:26 PM 3 comments: 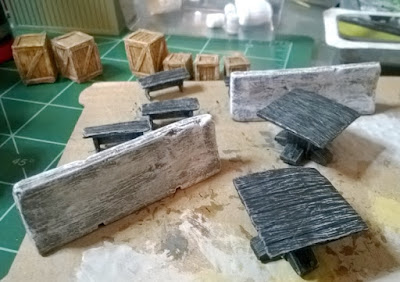 More scenery for my brother's All Things Zombie setup (a.k.a. Zombietown). A couple of Jersey barriers and picnic tables and benches in 28mm scale. You can also see some wooden crates ready for shipping. These are from Reaper's Bones line, and a cinch to paint: base color, drybrush lighter, drybrush even lighter, done.
Posted by Desert Scribe at 9:30 AM 2 comments: 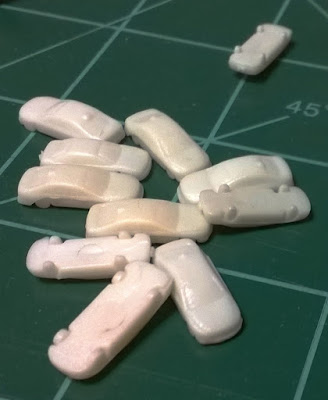 These are 1/300 scale architectural models from a Chinese seller on eBay. I figured they would fit right in with the 1/285 Ogre miniatures, and I was right. They also look good next to the 1/285 military trucks.

I want to use these vehicles for more than just scatter terrain for my Monopolis setup for games of Ogre--although they will work great for set dressing. 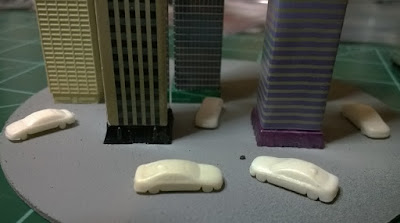 These tiny models were cheap enough that I bought 300 of them, so I can make roads jammed with traffic that will play a part in future battles around the city of Monopolis. 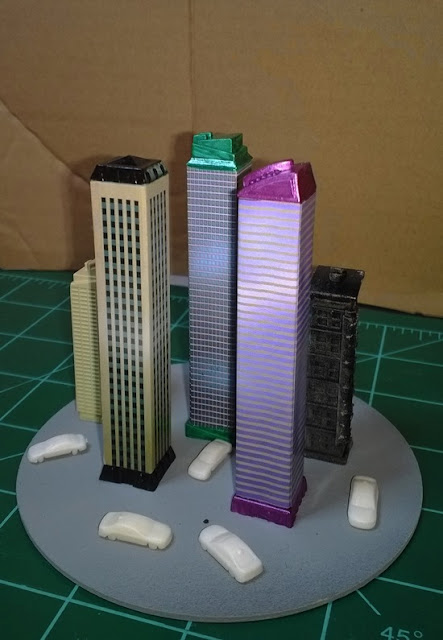 They should be easy to paint en masse: I will get several colors of spray paint and take care of them in large groups (after first spraying the undercarriages black). Maybe a wash to bring out the windshield and windows, and I'm done mass producing cars.
Posted by Desert Scribe at 9:30 AM No comments:

Another belated game report; this one from the day after Thanksgiving, when I had a couple of friends over to enjoy the oversized awesomeness that comes in the massive OGRE Designer's Edition box. 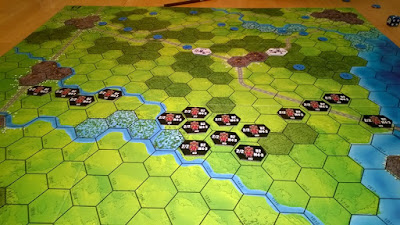 First was the advanced Breakthrough scenario, with me as the attacker and Jonathan as the defender. Rob, who had played a game of basic Ogre with me a few weeks earlier, watched. I had a margina victory, not getting nearly enough GEVs past the defense like I was supposed to. 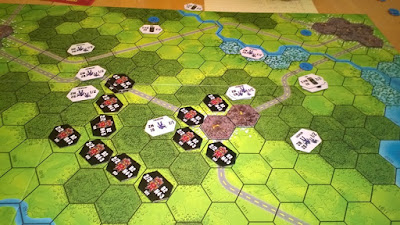 For the next game, Rob and Jonathan brought a couple of Ogres against my conventional armor force in a Raid variant with more units and a built-up city at my end of the board. 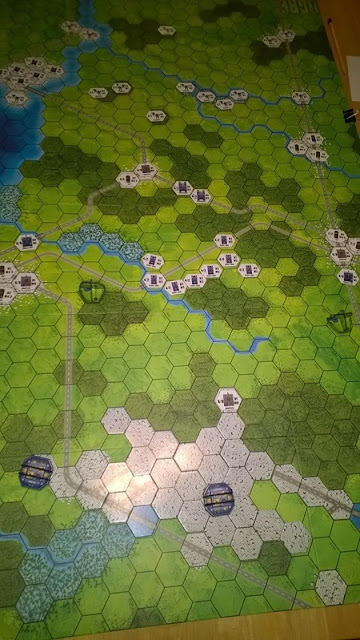 There was much destruction of town hexes as my defenders tried to use the terrain to their advantage. In the end, though, the Ogres triumphed. 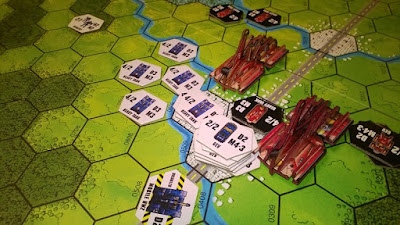 I always enjoy playing Ogre, and I hope to host more games. I want to try out a massive invasion scenario using at least six of the eight GEV map sections that come with Ogre DE. 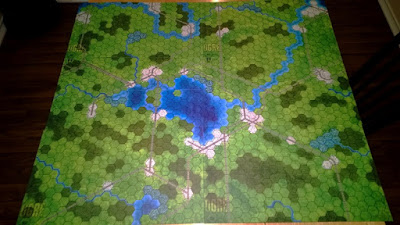 The defender sets up north of the river, lake, and stream that starts in the middle of the left side of the map. Use the overlays to fill the remaining clear hexes with town on that penninsula at the top, and have the attackers come from the bottom edge. Their goal is to capture that city. Who's in?
Posted by Desert Scribe at 1:00 PM 1 comment:

Hordes of the Things game day

More than two months without a blog post---and even this is from last month. I blame general laziness as well as Fallout 4. 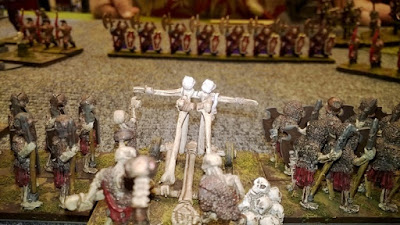 So in January, I made it down to TableTop in San Antonio for some Hordes of the Things. While we use repurposed Warhammer figures, we arent' afraid to get creative. In that regard, I brought out my Space Invaders army: fifteen Hordes (the Space Invaders themselves), two Sneakers (the ghosts Blinky, Inky, Pinky, and Clyde crossing over from Pac Man), and an Airboat general (the saucer). 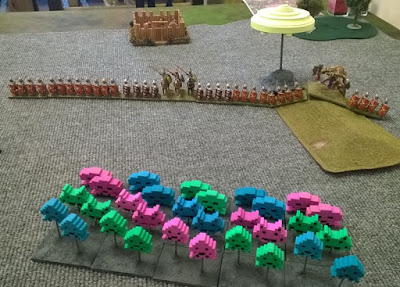 Their first opponent was Johnny's fantasy Romans with a whole bunch of Spears, a couple of Blades, a minotaur Behemoth, and a Hero general. Before his line could engage my massed army, the saucer captured his stronghold with the aid of the ghosts. 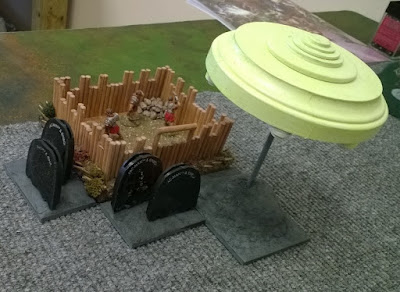 My next game was against Grant, who brought his AT-43 army. I mainly remember he played it with a Aerial Hero general and a Paladin, along with Blades and Shooters and a Behemoth. His Hero and Paladin ended up taking out my Airboat general to win that one. 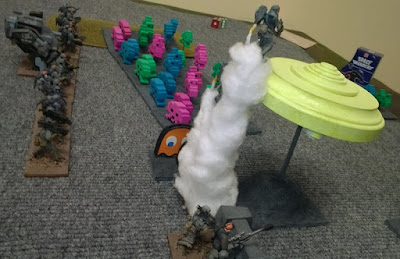 I also faced off against Blake's Chaos army (mostly GW figs and a D&D prepaint), but I switched to my skeleton army (Magician general, Spears, Shooters, Artillery, and Lurker). His Hero, accompanied by Knights, ended up getting around my flank to kill my Artillery, and he eventually won on points. 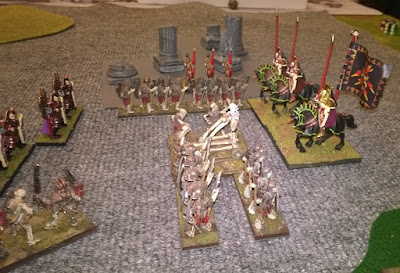 Meanwhile, Chip's GW Empire army took on Johnny's Romans. I can't remember how that one turned out.

The GW Empire army also fought the AT-43 force. Don't know the result of that, either. 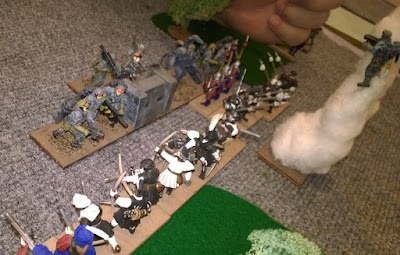 Finally, we had a big battle: Chip's dark elves joined my undead against Grant's AT-43 army teamed up with Blake's GW Empire force. 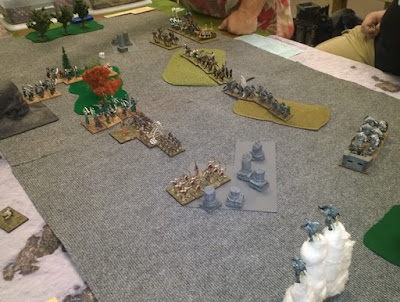 My Magician general forced Grant's flyers to flee off the board. Then Chip and I drew in the enemy commander-in-chief and finished him off to claim victory. 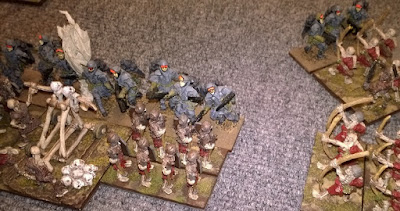 A fun day of Hordes of the Things. Next time we play, we want to do more of a scenario-driven game--Ragnorok. Time to dust off the Sons of Muspel!
Posted by Desert Scribe at 4:48 PM 2 comments: