Kickstarter for Escape the Dark Castle 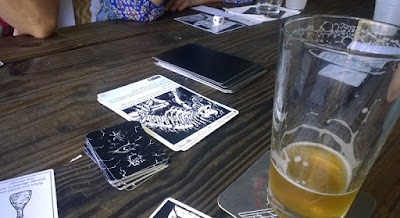 Escape the Dark Castle is a fun, card-based, RPG-lite with a very old-school vibe and evocative black-and-white artwork. The game can be played most anywhere, including our local watering hole, as shown above. The original game sold out, but is now being reprinted as part of a Kickstarter for several expansions to the base game. The expansions add new cards and new mechanics to Escape, as well as a collector's box designed to hold all the components from the base game and the additions. If you missed out on this the first time, give it a look. It's a fun game that's ideal to play pretty much anywhere as you enjoy a beverage.
Posted by Desert Scribe at 11:02 PM 2 comments:

Run through the jungle 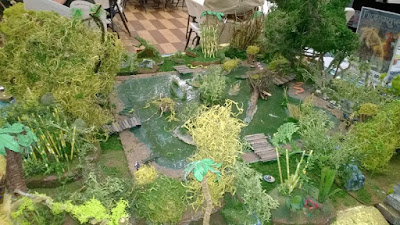 I haven't been blogging about Ghost Archipelago much, even though we've been playing that game on a consistent basis since January. 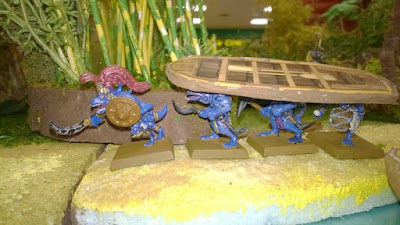 So here's a game from early April that involved our crews toting boats overland to a swamp in search of treasure. 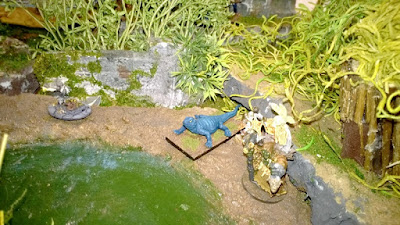 Spoiler alert: What we found was mostly critters. 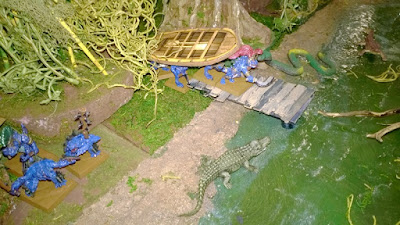 Yes, my Heritor and his crew are lizardmen. I like to be different. 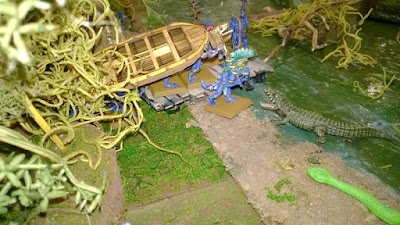 And with a Wave Warden, I couldn't do much to keep the swamp denizens away, despite our common cold-bloodedness. 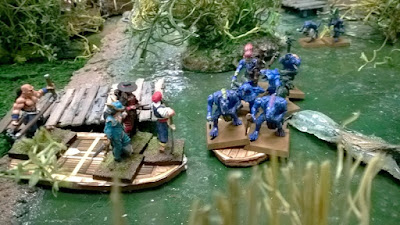 There were also other crews to deal with, although for most of the game we were content fighting the creatures and not each other. 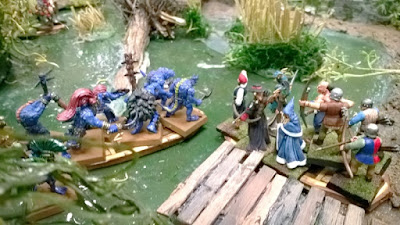 A great game, and fantastic terrain by our resident terrain builder, Yosef.
Posted by Desert Scribe at 10:00 PM 3 comments: 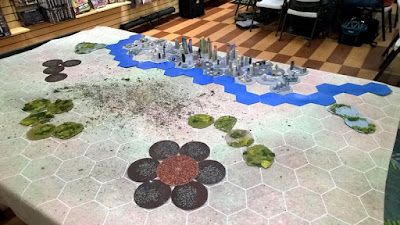 We're coming up on this month's Ogre game, so it's time for a report on last month's Ogre game. The scenario was a counterstrike by the besieged Monopolis defenders, who sallied forth to take out the besiegers' command post and supply depot. I actually got to play in this game instead of just referee. My opponent was someone who had seen us playing a couple months ago and expressed interest. 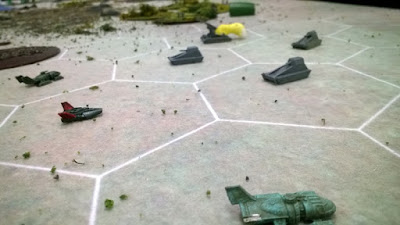 Despite having revetments, the besiegers (a group of mercs calling themselves the Ravagers, whom the main attacking force despises) lost two light artillery pieces and nearly half an infantry company when the Monopolis Volunteer Militia opened up with its artillery on the outskirts of the city. The bombardment was the signal for the city's GEVs to make for their targets. Unfortunately, the Ravagers took out more than a third of the counterattackers, losing just one heavy tank in the process. 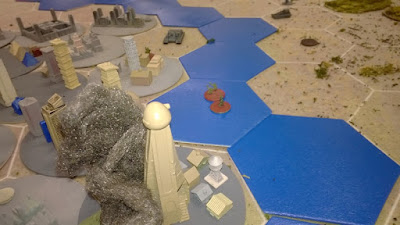 The tables quickly turned, however, as the Militia destroyed the attackers' supply dump. No more hot meals on this side of town. With casualties mounting, the city forces fell back, leaving the command post up and running. Meanwhile, the Ravagers headed toward the city, hoping to destroy the Monopolis artillery or laser tower with their own mobile howitzers. 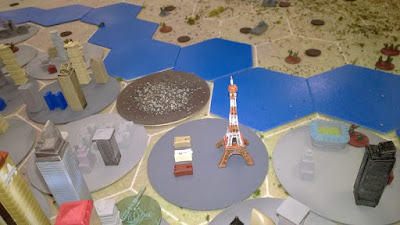 While the besiegers did take out the laser tower, they were unable to destroy the city's howitzers and took casualties among their heavy armor--losing all three superheavy tanks and another platoon or so of heavies, along with one of their mobile howitzers. They wore down the defenders' infantry and GEVs in the process. 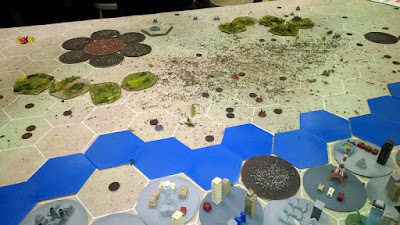 In the end, the attackers had to fall back as the city's reinforcements were due to arrive (the scenario ended after six turns). With the attackers losing a supply depot but retaining their CP, and both sides suffering massive armor losses, I called the battle a draw. But I got to play, and I got to get another player to the table, so I consider the evening a win.
Posted by Desert Scribe at 10:10 PM 3 comments: