Battle of Five Armies for HotT 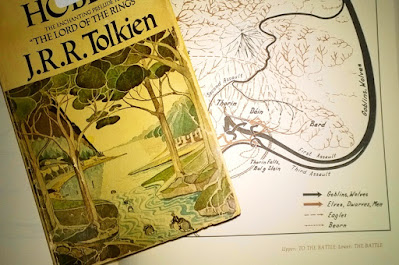 My latest thoughts are on the Battle of Five Armies from The Hobbit (the book, not the movie) and how to game that using Hordes of the Things. After getting inspired by the maps in The Atlas of Middle Earth and rereading the novel, I am considering assembling forces, not in the traditional 24-point HotT armies, but in numbers proportionate to the figures chronicled in the novel and the map collection. Oh, and because of the size of the armies, I think it would be cool to do this in 6mm scale.

First you have the armies of Dwarfs, Elves, and Men. Durin's folk are listed at about 500 troops, clad in mail and wielding two-handed mattocks--so maybe four stands of Blades, plus Thorin and Company as a Hero. The Wood Elves include spearmen and some archers, numbering about twice as much as the Dwarfs--let's say six stands of Spears and two stands of Shooters. That leaves the Men of Laketown with a couple hundred warriors--call them two stands of Warband. That's 32 AP total.

Don't forget: the Eagles are coming! (as late-game reinforcements)--four stands of Flyers. And Beorne arrives as well, enlarged to near giant-size--sounds like a behemoth. And that makes 12 more AP.

Then you have the Goblins and the Wargs, which vastly outnumber their foes. The latter forces are easy--eight stands of Beasts. As for the former, you have Goblins riding wolves--eight stands of Riders--and the sword-carrying Goblins with their numerous black and read banners--a dozen Hordes! Finally, you have their general, Bolg, and his bodyguard of huge Goblins with scimitars as a Warband. Tolkien also mentions bats attacking or obstructing the defenders, so a couple stands of Flyers as well. In all, 50 AP.

Not balanced armies, but they feel pretty true to the book. This was a fun little thought experiment; now to source a bunch of 6mm fantasy figures ...