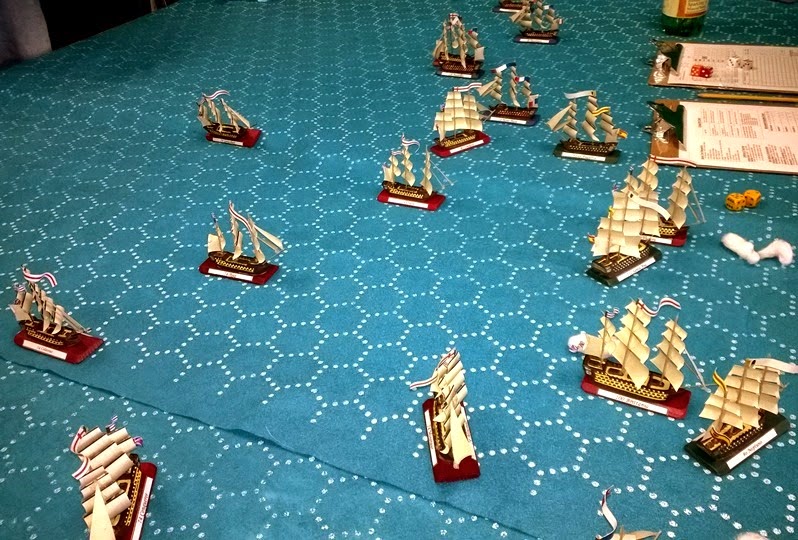 Some three weeks ago, Grant ran a Battle of Trafalgar scenario at Dragon's Lair using some Portsmouth minis and modified Bloody Broadsides rules. 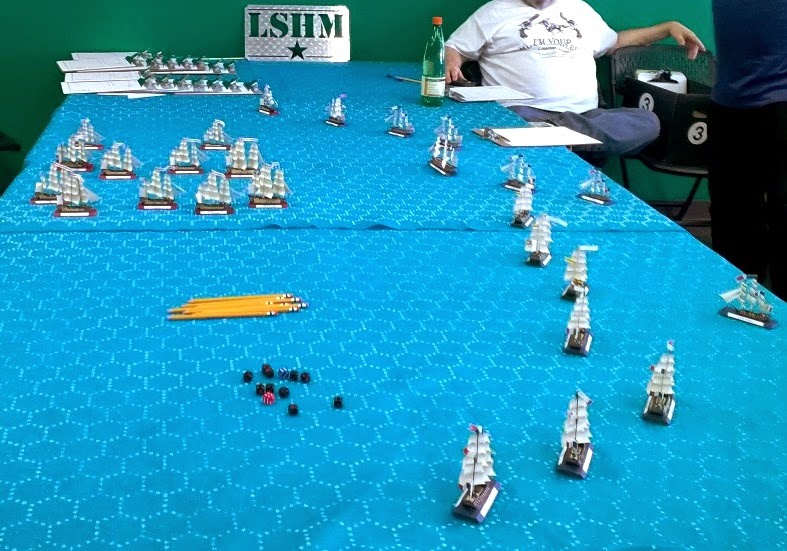 There weren't quite as many ships in our refight of the battle, but we did have over a dozen players commanding 17 or so sailing vessels. 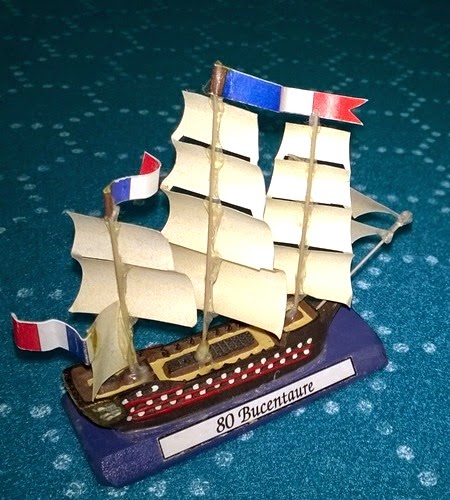 I captained the Bucentaure, an 80-gun French ship. 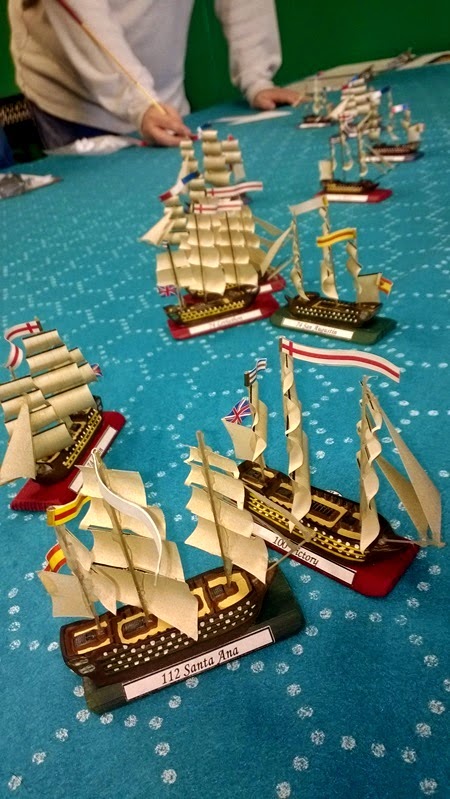 We played a speeded-up version of the game, with automatic damage (the to-hit rolls slow a big game down) with the opportunity to roll for criticals. We maybe had one or two--mostly fires. 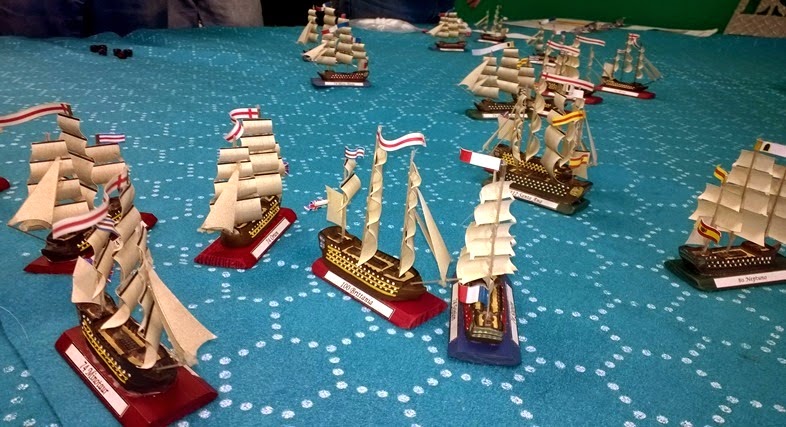 It was a fun game, with a lot of fog of war as ships carried out their written orders--sometimes to the detriment of the rest of the fleet. 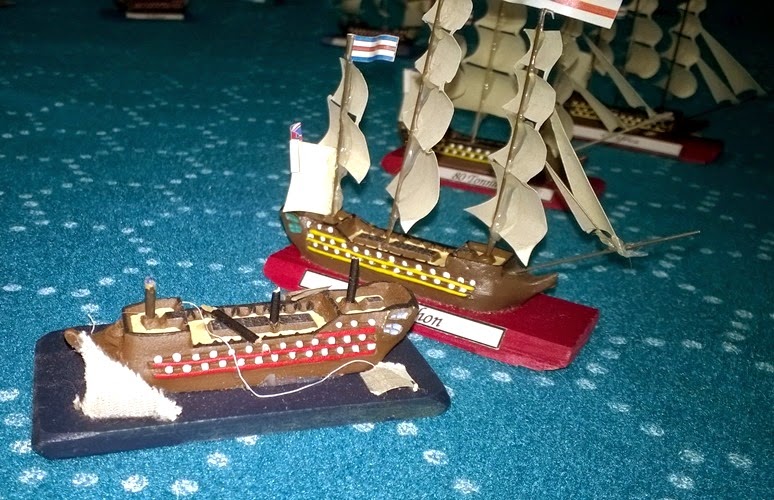 The French and Spanish lost three or four ships, the English British maybe had one vessel that struck. 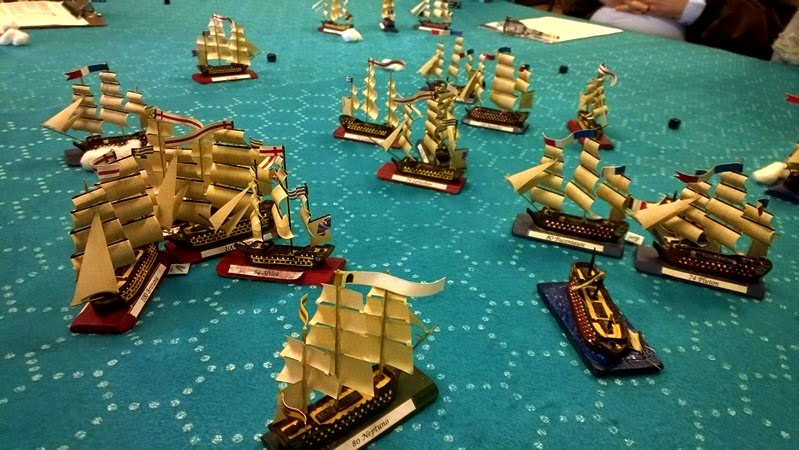 In the end, the English British, with their superior crews, prevailed. It was an enjoyable time.
Posted by Desert Scribe at 8:05 PM 4 comments:

Reluctantly crouched at the starting line ... 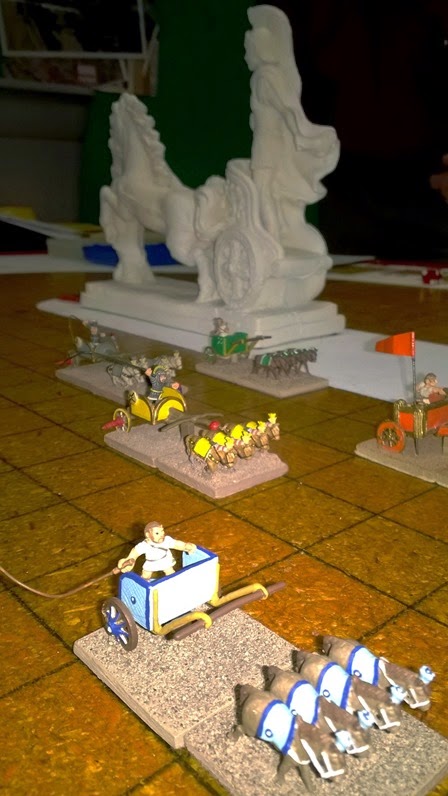 Last week a few of us from Lone Star Historical Miniatures got in a game of Circus Maximus. While originally a board game, this is one of those sets of rules that lends itself easily to minis play. There were just three of us, so we each took a pair of chariots for a two-lap race.

This game's not just about speed and driving skill--when passing someone, you can choose to ram their chariot or use your whip against the other team. Bumping another competitor can damage one or both chariots, and causes the target to fall back. 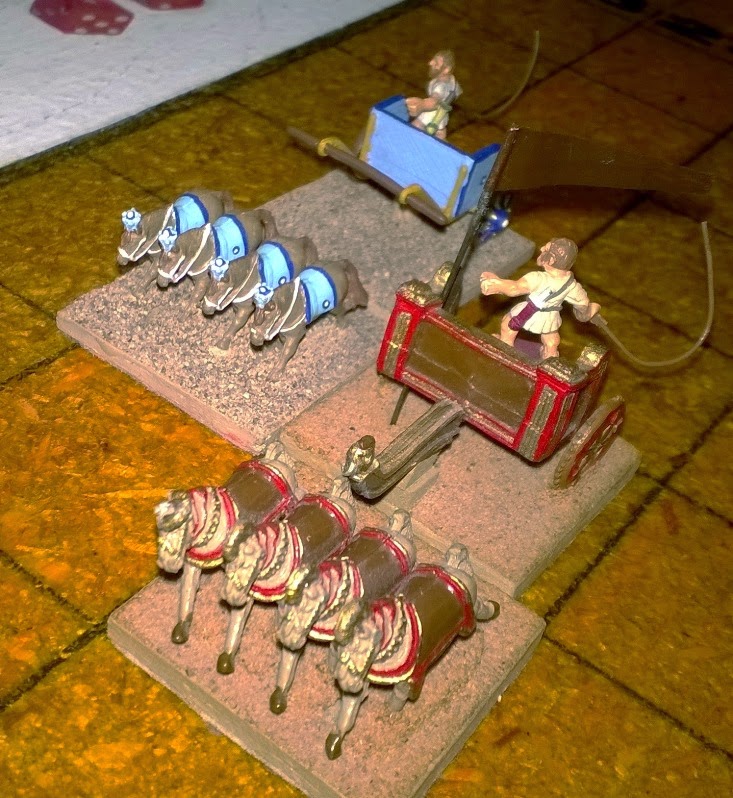 Of course, if you take damage there is a chance you'll wreck. During this race, each of my chariots received a little damage; to avoid flipping over, I just needed to avoid rolling snake eyes. So of course I rolled a two. Both times. One other driver crashed as well. The overturned chariots remained on the track as obstacles, while the horses kept galloping around the hippodrome.

This player-vs.-player aspect is fun, as you can improve your position in the race, or just screw over your opponent for fun.

We played on a large board, using 15mm minis. Below are three drivers in the time out area, after flipping their chariots and letting go of their horse teams (you can let the horses drag you across the finish line, but that's not advisable unless you're very close to the end of the race).

In the end, Joe, who had lost one of his chariots, finished first with his remaining racer. Circus Maximus is a fun game, especially on a large board. It's even better when you have a large number of competitors, like I've seen at Millenniumcon.

What other board games look good with minis?
Posted by Desert Scribe at 8:34 PM 2 comments: