Since everyone else is doing it, I might as well offer my own year-end retrospective. Personally, 2021 was a horrible year, as old age claimed two close family members, and COVID showed no signs of ending (thanks, anti-vaxxers!).

On the gaming front, not much better. My group attempted to start up gaming again on a regular basis in July, but the pandemic came back with a vengance, so we had to put that on hold again. I did manage to slap paint on an average of one miniature a week (if you count some of the terrain pieces I made, which I did)--and I did attend MillenniumCon and run my Monopolis game two times! And I did manage to keep this blog going. Thanks everyone for their feedback, I apologize if I haven't yet responded to your comments.

I'm not going to set any goals for the coming year--recent history has shown me that's futile--but I will try to game and enjoy what I can and share it on this blog. Meanwhile, here's wishing you and yours a brighter new year in 2022.

Email ThisBlogThis!Share to TwitterShare to FacebookShare to Pinterest
Labels: bandwagon

Terran Transolar Federation Naval Command's signal woke the Devastator-class heavy galactic war machine from its suspended operation. Terran MAATAC* Unit LMR-682 checked its internal chronometer, which indicated that it had been 359.81 standard years since it was ordered to stand down. 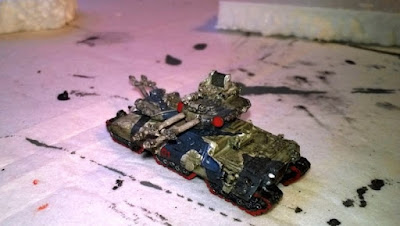 Checking the local net, the cybertank learned that the base where it had been parked had been sold to a mining consortium, which for 265 years used the area as an industrial waste repository until encroaching glaciation shut the operation down. Now, transparent ice coverd streaks of mine tailings and toxic chemical spills, while blocks of frozen water thrust up from the plain. 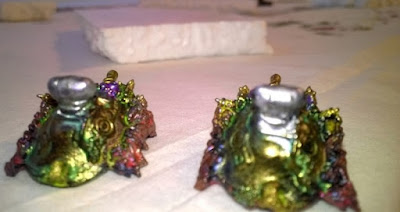 According to the Navy, an Entomalian Imperial Fleet squadron of three Wasp-class stellar destroyers and a Hornet-class stellar cruiser excorted four Locust-class galactic transports into the Rellis system. While the TTFN galactic battlecruiser Colossus chased off the enemy warships, the cargo vessels made landfall, depositing an unknown number of Bug war machines. Some of which, the Terran war machine computed, would soon be scouting the area. 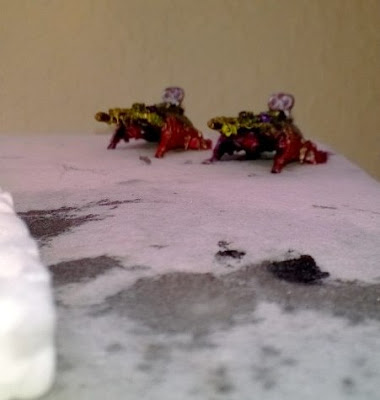 I played a quick solo game of MAATAC to familiarize myself with the rules. My painting table, along with some broken up styrofoam packaging, made an adequate battlefield. It was a simple scenario: one Terran Devastator-class heavy galactic war machine had to defeat or drive off a quarted of Entomalian Black Widow-class destroyer war machines, whose goal was to defeat the Terran. The Terran had better armor and more weapons, but the Bugs had the numbers. I would play out movement, which is supposed to be simultaneous, by moving the Terran first, then the bugs either randomly or whatever made the most sense for them. Shooting (also simultaneous) was simple: The Terran would fire everything at one Ent, and the Ents would fire everything at the Terran. 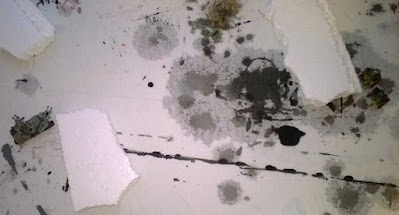 The first turn was just maneuvering, as everything was out of range. On the second turn the Devastator was in range of the first pair. Both sides had climbed outcroppings, hoping to obtain a hull-down advantage. Instead, they shot at each other with everything they could. The Terran hit one bug with several lasers, none of which penetrated its hull. Another shot hit the Ent's mobility system, slowing it down. The Black Widows' return fire failed to penetrate the Terran's hull, but one shot did disable one of the Devastator's launchers. 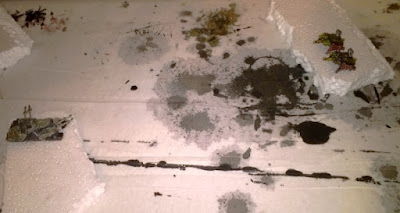 Turn three saw the Terran move closer to the first pair of Entomalians in order to keep the other two out of range--but that meant giving up the high ground. Most of the Devastator's shots landed on the ice in front of the Black Widow, but it did manage to take out one of the bug's particle weapon launchers. In return, the Entomalians strippped a launcher off the Terran. A hull hit failed to penetrate, and successful shots to the Terran's treads did not slow it down.

The second pair of Black Widows tried to close the distance during turn four, but the Terran heavy kept its distance while closing with the first pair, who stayed in place. The Devastator's energy weapon volley again was mainly ineffective, hitting a laser and a launcher, but doing no other damage. However, its particle weapon launcher, which I play as indirect fire, scored another hit on the bug's mobility system, reducing its speed even more. The Entomalian shooting was more successful, as they stripped the Terran of three laser cannon and one particle weapon launcher. However, the Devastator's armor abosrbed two laser hits to the hull and one to the turret with no damage. 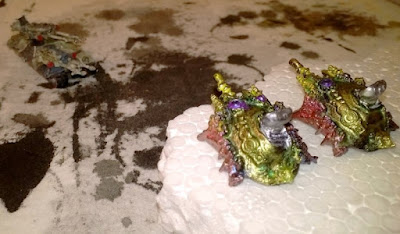 The fifth turn saw the Terran move closer to its targets in order to keep the remaining Entomalians out of range. However, with just a single heavy laser and a single particle weapon launcher, it was not able to do much damage to its hull-down target. Although the particle weapon hit its target's weakest armor, it still was not able to penetrate the hull.  And as the damaged Black Widow fired back with just one medium beam and one heavy beam (its partner was too far back to shoot), it stuck the Devastator's hull and turret. A successful penetration roll meant the heavy galactic war machine was destroyed--a resounding success for the Entomalian scouts! 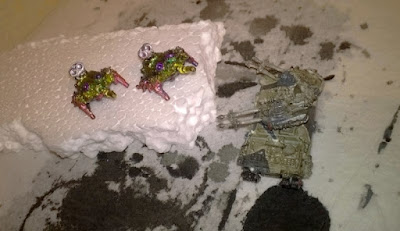 The burning Terran MAATAC sank into the melting ice, as the Entomalian vehicles chittered at each other in hexidecimal code. Merging their signals, they sang to a satellite in low orbit. The objective was secured, and the troop carriers could bring their cargo and begin building the new hive. 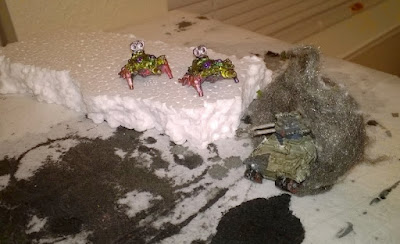 A fun and quick game, and I should not have been surpised that the Terran got blasted. It should have sniped at long range and used line of sight to hide until it had a good shot. With the way combat works in MAATAC, the smallest unit always has a chance to take out the largest vehicle. I need to play again. Let's see if the Terrans can prevent the Entomalian reinforcements from getting through.

I gave my homemade contrast paints a test drive, and the results weren't good. My recipe was equal amounts of ink and matte medium. The hobby stores didn't have any flow aid, so I used isopropyl alcohol instead. 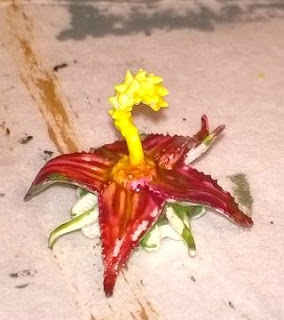 This flower had some good coverage, but there were spots I applied the color where it just seeped away/ 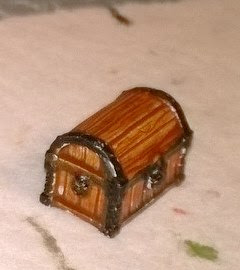 I got a little better results on this chest, but you can still see a couple of spots I painted that are now bare. Oh well, back to the painting table!
Posted by Desert Scribe at 11:58 PM 1 comment:

Email ThisBlogThis!Share to TwitterShare to FacebookShare to Pinterest
Labels: painting 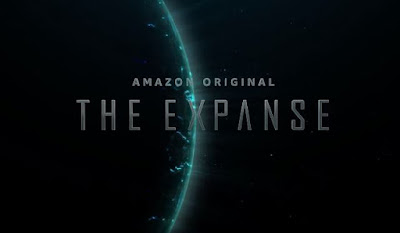 I'm watching the sixth season of The Expanse, a great hard sci-fi TV series based on a great hard sci-fi book series. And thinking about how to game it out. In this setting, ships have to change their direction of thrust to change their vector--no Star Trek- or Star Wars-style swooping about. And while Galactic Knights does a good job of representing vector movement, it doesn't really convey the sense of planetary distances on a solar scale that I get from The Expanse. That's where Triplanetary. the Steve Jackson Games rerelease of the Game Designers Workshop classic space combat boardgame, comes in. 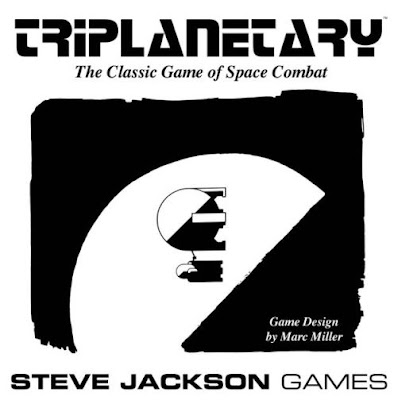 This game has a map of the solar system (including the Belt) out to Jupiter, takes planetary gravity fields into account, and has counters enough to account for all the polities in the setting: white with blue and red markings (United Nations of Earth and Luna) red with black markings (Martian Congressional Republic Navy), and black with white markings (Outer Planets Alliance). There are also some blue with white counters to represent noncombatants, and about a dozen colors of corvettes for unique spaceships (like maybe the Rocinante or the Razorback). This setting and these counters would make a good multiplayer scenario for a convention game, with each side having different goals. Anyone else thought of anything like this?

Email ThisBlogThis!Share to TwitterShare to FacebookShare to Pinterest
Labels: The Expanse, Triplanetary

OK, not really painted painted, but touched up. I went in on the Terraforming Mars 3D tiles kickstarter that shipped earlier this year, and while the terrain markers for this game looked pretty cool as sculpted, they were missing somthing. 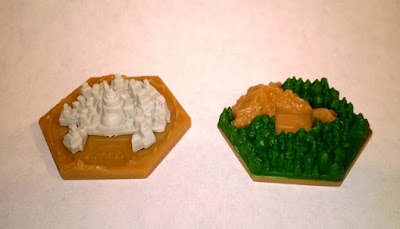 But with a wash and some drybrushing, these terrain pieces really pop. The city has more depth (maybe not visible in this pic), and the forest seems more lifelike. 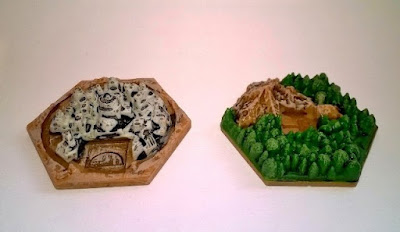 The TM expansion came with 24 city tiles, 40 greenery tiles, 9 ocean tiles, and 14 special tiles. I gussied them all up, and now my games of Terraforming Mars look that much cooler. 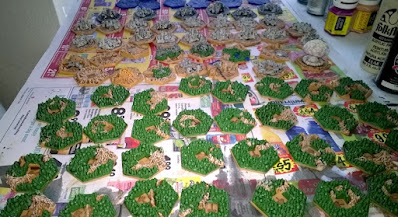 Posted by Desert Scribe at 11:00 PM No comments:

I've seen plenty of videos and blog posts about using contrast paints, and while they give great tabletop standard results in a short amount of time, I don't want to pay retail game store prices for a few milliliters of color. So when Youtube's algorithm presented me with some videos about making your own contrast paints, I decided I will give it a shot. 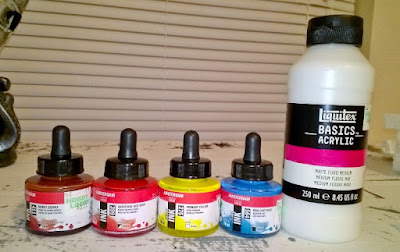 Armed with a craft store gift card from my wife (another great Xmas gift), I came home with some inks and matte fluid medium. With these three primary colors along with the medium brown (I already have some black and dark brown inks), I figure I can mix whatever hue I need. The recipe seems pretty simple: equal amounts of medium and water, along with the suitable mix of inks for my preferred color.
If anyone else has made their own contrast paints, please let me know how it worked out for you.
Posted by Desert Scribe at 11:17 PM 2 comments:

Wishing you a merry Christmas 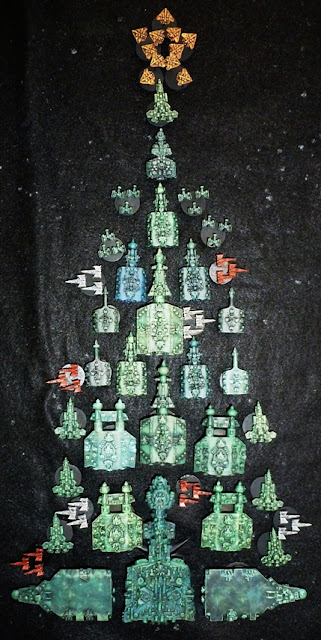 I hope you all have/had a merry Christmas, including some good food and drink, and time with the folks you care about. Happy holidays from Super Galactic Dreadnought!
Posted by Desert Scribe at 11:22 PM 2 comments: