Scenes from a Gaslight game 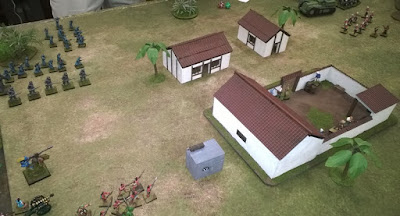 I had a chance to play Gaslight (Victorian science fiction rules) with the group a few weeks back. There were three factions descending on a British outpost in Africa, with a game master. 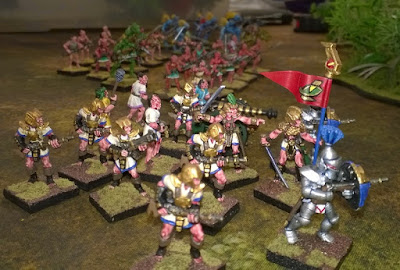 My faction was the Martians (or more correctly, Barsoomians), complete with radium rifles and big green heroes. It also included some Venusian parrot-men.

Then there were the Germans, with lots of mechanical soldiers and a couple of steam-powered vehicles. 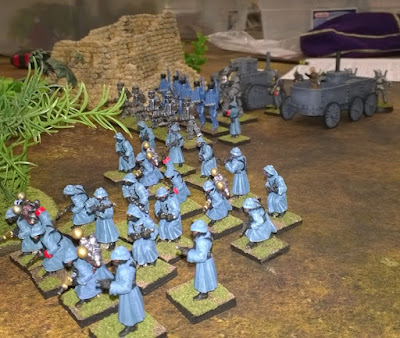 Finally, we had the British, including their gorilla friend. 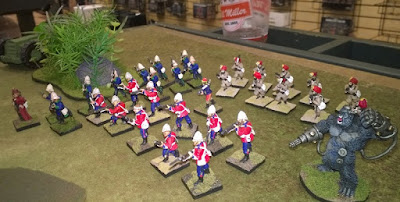 All three forces were converging on the trading post: The Brits to relieve it, and the other two to loot it. 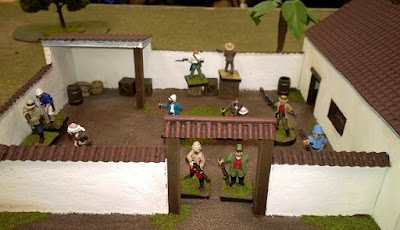 The Imperials, including the Postal Rifles and some Sikhs, advanced in column, supported by their own steam tank. 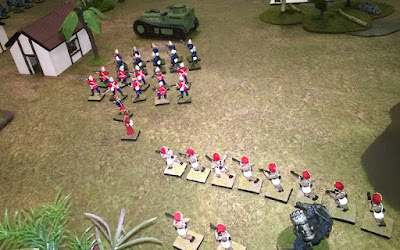 Meanwhile, my Green Martian led a group of Red Martians up to the outpost, and climbed through a window. 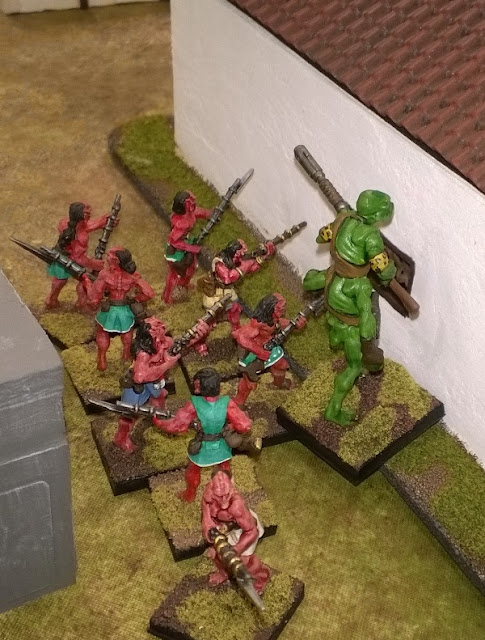 Unfortunately, when you roll up a hero in Gaslight, you can get some disadvantages as well as advantages. My guy was clumsy, and fell over when he climbed through the window. 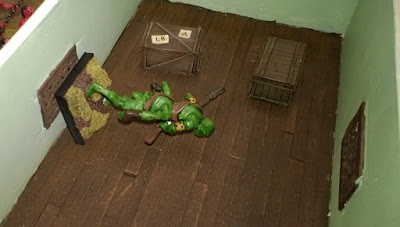 He attracted plenty of attention from the Englishmen in the courtyard. 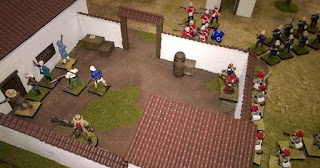 The Reds pulled him out and climbed in, as the Tommies began shooting into their own building. 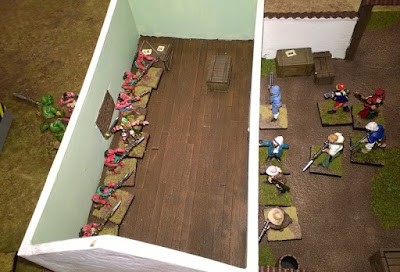 By this time, reinforcements had arrived, so the Martians were not doing so well. On the other side of the compound (not pictured), the robo-Germans were hauling away loot. 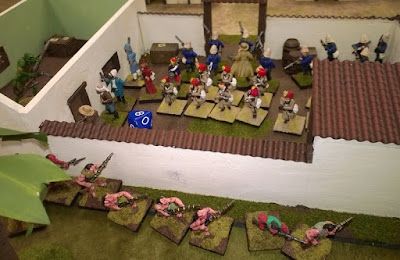 The parrotmen kept themselves busy with a German mech, but ultimately didn't stop the German war machine in general. 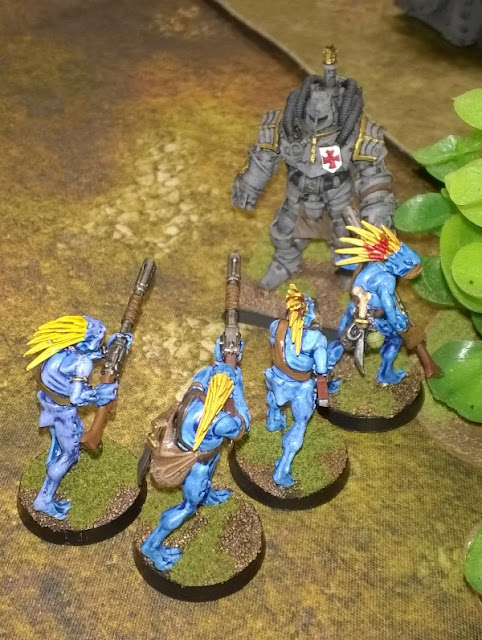 I'm not used to playing VSF, and the Gaslight rules were new to me, but I had a great time as we saw the narrative emerge from play.
Posted by Desert Scribe at 4:00 PM 3 comments: 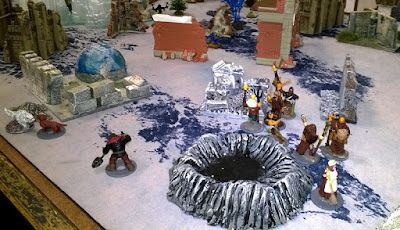 After some time playing Ghost Archipelago, our group returned to playing Frostgrave. 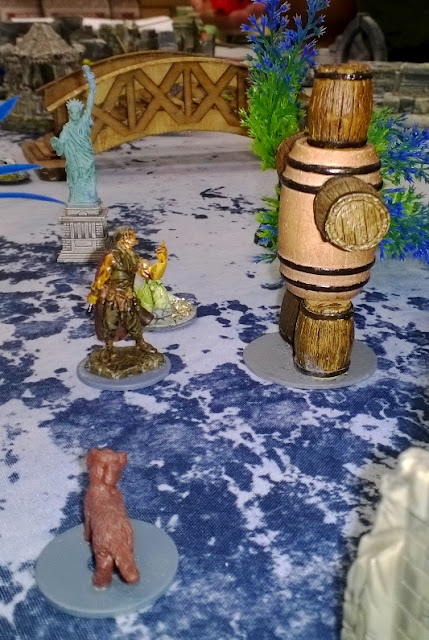 We started a new campaign, taking up the Hunt for the Golem from The Frostgrave Folio. 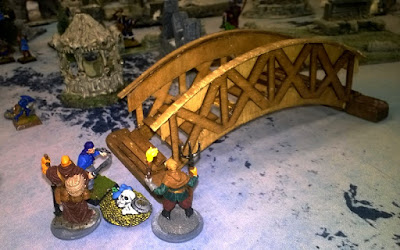 And of course there was the usual skullduggery between warbands as the four groups tried to take down the titular golem. 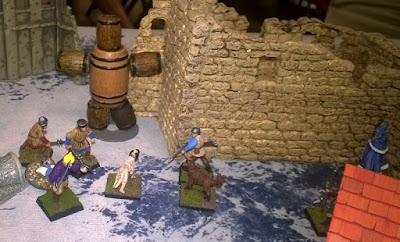 My large construct, Stout, proxied for the golem from the scenarios. 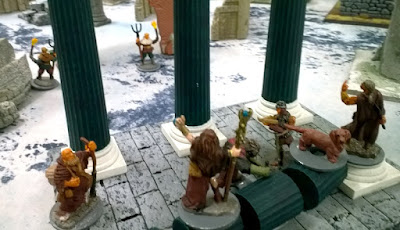 In the end, another wizard's group brought down the golem and earned the experience from doing so. 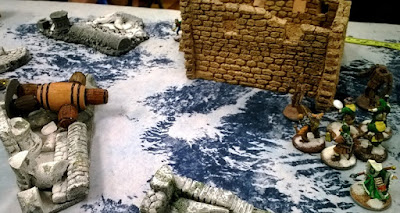 It's fun being back in the frozen city.
Posted by Desert Scribe at 4:01 PM No comments: 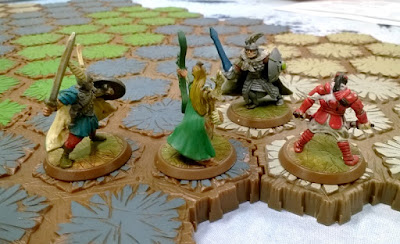 Steve Jackson is bringing back the old microgames Melee and Wizard, along with the compatible roleplaying rules In The Labyrinth--the whole system is known as The Fantasy Trip, and it dates back to the late 1970s. He recently did a Kickstarter to get it back into print, and I joined in. Since backers got electronic copies of the rules while we wait for the hardcopies to get printed, I decided to try out the game, repurposing my old Heroscape figures and terrain for some figure-to-figure tactical combat.

I refereed a game of two-on-two to give the other folks in the gaming group an opportunity to learn the rules. After that battle--which ended up with the advantage swinging back and forth until one side finally prevailed--we played a five warrior free-for-all. While my guy ended up fleeing the arena, the others stayed around to battle it out. We called the game when one warrior had the other on the brink of death.

It was a fun time, and my group seems willing to play it again, perhaps getting some sort of campaign going. I'm looking forward to more melees in the arena ... and later in the labyrinth.
Posted by Desert Scribe at 10:54 PM 1 comment: