Time is running out 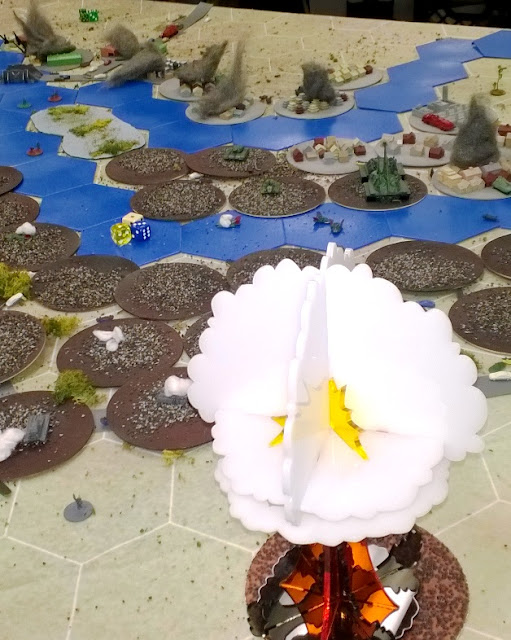 The doomsday clock keeps ticking, and October 31 is the last day to register for games at MillenniumCon XX. In addition to my Ogre scenario, The Siege of Steelville (minis, modular 3-D terrain, strategic nuclear weapons), there are nearly a hundred other games taking place at the convention (November 10-12). Right now there are still open slots in my game Saturday afternoon, and even if you don't preregister, you have a pretty good chance of getting a seat. Or if you don't feel like playing, just come by and say hi.
Posted by Desert Scribe at 9:44 PM No comments: 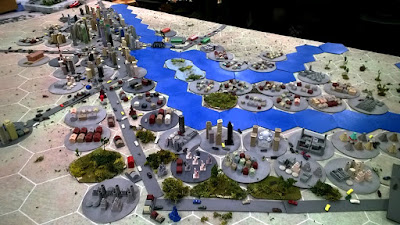 I had a chance to playtest my Siege of Monopolis Steelville scenario at Dragon's Lair last week. I had six players pushing enough minis for ten, and I got to try a new layout for my game. The participants and bystanders liked the table, but it took a long time to set up. 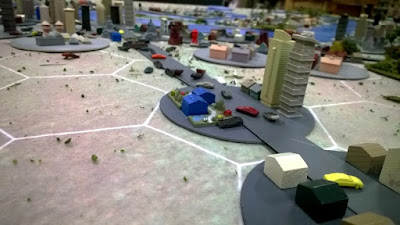 Once the defenders placed their forces, the attackers came at the city from the west, with three Ogres, lots of armor, and an even larger about of infantry. Interestingly, they decided to hold off on launching their cruise missiles. 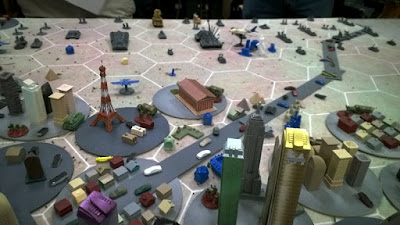 The defenders, however, decided not to wait, and they launched one of their cruise missiles (seen below on its flight stand) toward the enemy. Of course, the enemy tried to shoot the massive nuclear weapon down--and they succeeded. Since in Ogre, a downed cruise missile detonates on a roll of 6, you can guess what happened next.

The warhead went off, right over central Steelville. 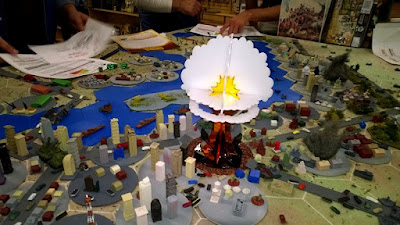 These weapons are quite destructive, leveling town hexes up to four spaces away and damaging them up to six. The blast took out friend and enemy alike, although the attacking cybertanks were far enough away to remain unharmed by the blast. 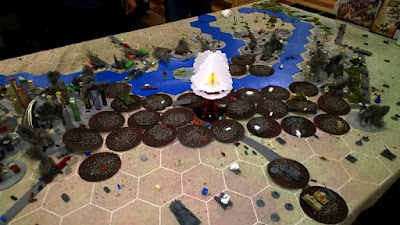 The defenders were on the ropes, but they held out long enough to get another cruise missile fired. This one made it all the way to its target, the Ground Effect Ogre. It destroyed the cybertank and some nearby units, helping the defenders hold out a little longer. In the end, however, the attackers still had two functioning Ogres and plenty of other units, so they were the winners. 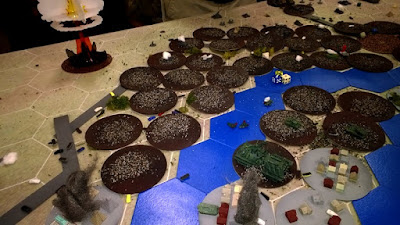 It was a fun time and a productive playtest. My players gave me some useful tips on getting set up quicker. They also suggested cutting down on the number of cruise missiles, since using them basically halts the game. Good advice that I plan on heeding.
Posted by Desert Scribe at 10:55 PM 4 comments:

Join The Siege of Steelville 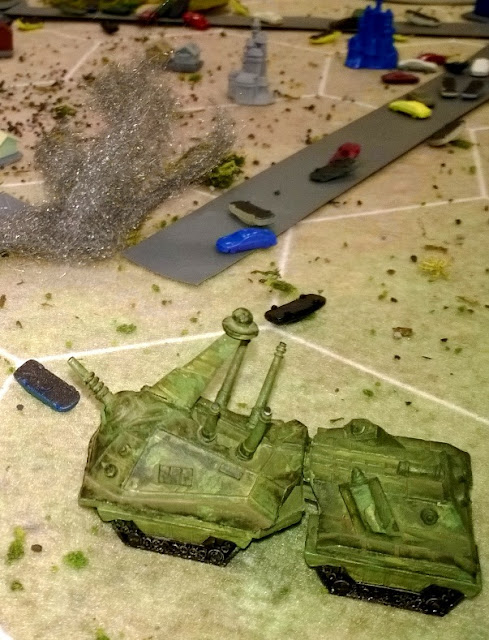 Just one week left to register for games at this year's MillenniumCon in Round Rock, Texas (Nov. 10-12). In the spirit of the convention's theme marking the 75th anniversary of the Battle of Stalingrad, my Monopolis scenario for Ogre/GEV has been reskinned as The Siege of Steelville. From the event description:


In the 22nd century, the Millennium Realm’s powersuited soldiers and armored cybertanks surge east to conquer the city of Steelville. Defiantly, the Collective Council’s outnumbered troops and Ogres race to defend the workers’ metropolis on the banks of the Long River. This is a custom sci-fi tank combat scenario using Ogre Designer’s Edition rules and official Ogre miniatures (along with some original units) on a large hex mat with 3-D terrain. With room for up to 10 players, you and your friends can defend the besieged city--or you can conquer it. Fight in the Siege of Steelville!

I'm looking forward to running this scenario. In addition to the official units, I will have a few custom pieces on the board, such as my Ground Effect Ogre, armored boats, UAVs, and emergency response vehicles. 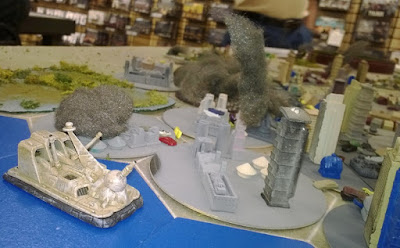 I have room for 10 players, and I've tweaked my map a little so that combat begins sooner. Here's a shot of the work in progress: 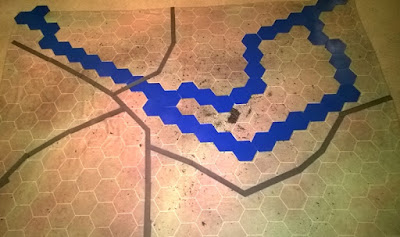 There are still plenty of seats available for my game on Saturday afternoon, so sign up if you're attending the convention and you want to get in on a big game of Ogre. If it does fill up and you really want to play, I will try to squeeze you in. Hope to see y'all at the convention!
Posted by Desert Scribe at 12:07 AM 4 comments:

I cobbled together some additional Monopolis terrain for my Ogre game at MillenniumCon. I'm particularly happy with the radio tower, which started out as the Eiffel Tower from a Toobs package. 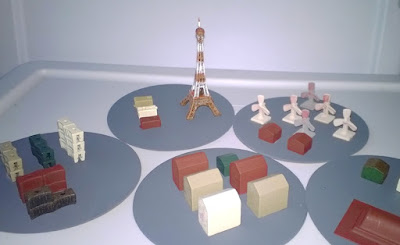 I also mounted some cruise missiles on flight stands for when players launch their nukes (from Kenner's old Mega Force die-cast toys). Even though these markers will only be on the table for a short phase of a turn, I think they add to the game. 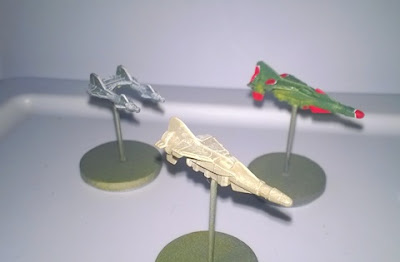 Less than a month to go till the convention. Hope to see some of y'all there.
Posted by Desert Scribe at 7:17 PM No comments: 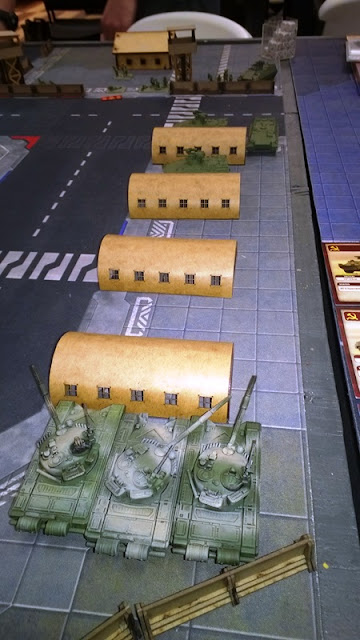 I recently played my first-ever game of Team Yankee, the Flames of War spinoff based on the concept of the 1980s Cold War turning hot. 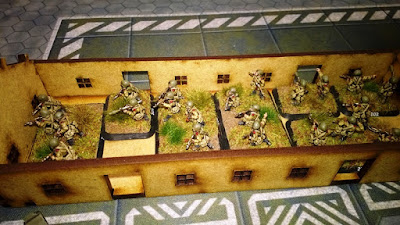 A couple of experienced players guided me and another newbie in a game, I took a force of Soviet armored infantry, tanks, artillery, and even some Hinds. My opponent played the West Germans. 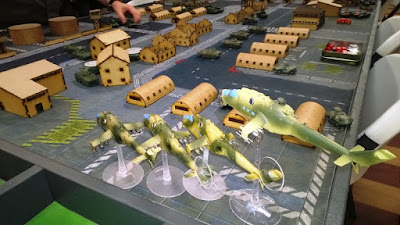 The helicopters weren't much use. They didn't get a chance to take out many enemies before the NATO antiaircraft shot down three of them, causing the last chopper to flee. 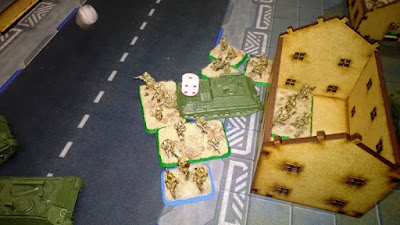 My infantry was more successful at close-assaulting enemy vehicles, and their motto was "Forward!" The T-72s, however, didn't fare as well versus the West German's panzers. In the end, the capitalist lackeys managed to hold off the heroes of the workers' paradise. 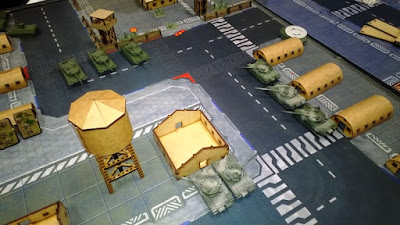 The game mechanics were nothing innovative, but it was a fun game with a lot of maneuver all over the table. And it played really quick, thanks to our instructors' thorough knowledge of the rules. I'm glad I tried it.
Posted by Desert Scribe at 11:36 PM 3 comments: