Buy "By This Axe" 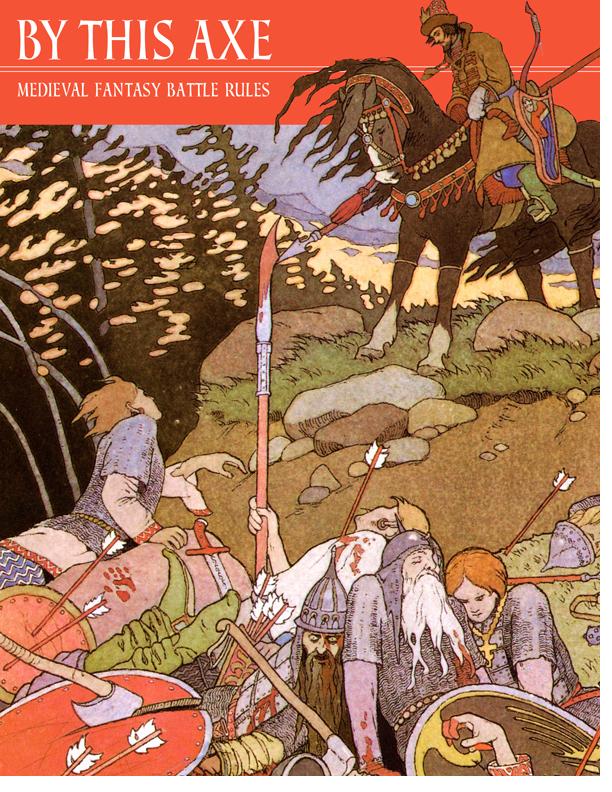 Chris, that Weird-invoking author of the wild & wonky Hill Cantons blog, has announced the release of his midieval wargame rules, By This Axe.

By This Axe is a short booklet with rules for playing battles with or without miniatures. It includes a subsystem for fighting battlefield duels between champions (I like the idea of dirty tricks), as well as an abstract magic system and a method of converting D&D characters to battlefield leaders.  Scale is slightly abstracted, other than one figure can represent 5 or 20 individuals on the battlefield.  In addition to fighting, morale is an important part of the game, and can influence the outcome of a battle.

It may not be very groundbreaking, but I had a good time when I helped playtest this game way back when:  The battle seesawed back-and-forth to make for a thrilling match, and the rules are simple and straightforward.  The game plays very quickly, and Chris's conversion will make it easy to integrate into your roleplaying campaign if you ever need to fight a major battle.

He's charging eight bucks for hardcopy, and two-and-a-half for electronic, with all proceeds going to charity.  I'm looking forward to playing this again, and I encourage you to check it out.
Posted by Desert Scribe at 7:38 PM No comments:

Email ThisBlogThis!Share to TwitterShare to FacebookShare to Pinterest
Labels: By This Axe I Rule, Dungeons and Dragons

The Aquarians are here! 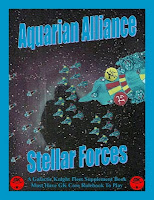 Monday Knight Productions has released the final expansion for its Galactic Knights starship combat game, detailing the last of the five factions in that game, the Aquarian Alliance.

According to the publisher's announcement on the  yahoo group, this booklet includes a new type of weapon and nanite armor.  I'm wondering if it also has rules for cloaked ships as well, since that was an aspect of the game's predecessor, Starfleet Wars.

Looking forward to reading this.  If you're interested, you can find the book here.
Posted by Desert Scribe at 11:08 PM 2 comments:

In case anyone missed this ... 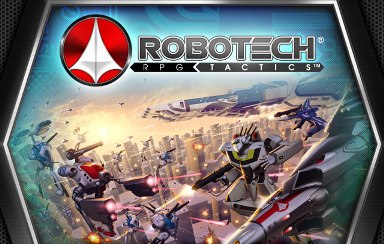 ... there's currently a Kickstarter project for a Robotech miniatures game.  Robotech, of  course, is a franchise based on several anime (including Macross) that helped launch the giant stompy robot craze in the United States and was one of the inspirations for the Battletech franchise.

Palladium Books is doing the Robotech RPG Tactics game--a set of miniatures rules that comes with a whole bunch of 1/285 scale plastic mecha models.  That's the same scale (and some of the same designs) used for the Battletech game!

While the Robotech RPG Tactics game looks interesting, I'm also thinking about all the other rules you could use these models for.  In addition to Battletech, there's Dirtside, Future War Commander, and 5150: Star Army (especially if I ever get around to writing some company-level armor rules for that game).

Go check out the various pledge levels--the game's a little costly, but you get a whole lotta minis for your money.  And if the price is too steep, you can always get some friends to chip in and then split up the goodies.  Better hurry though, the funding campaign ends on May 20--just one week left!

Playing Song of Blades and Heroes with robots 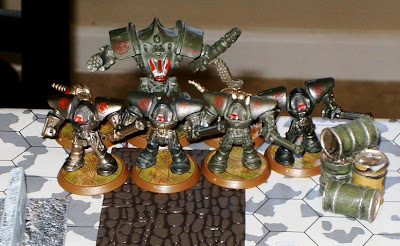 I'm late to the posting, but I thought I would share my perspective of the day-long gamefest at the home of Holdfast, known as Man-Summit 2013. 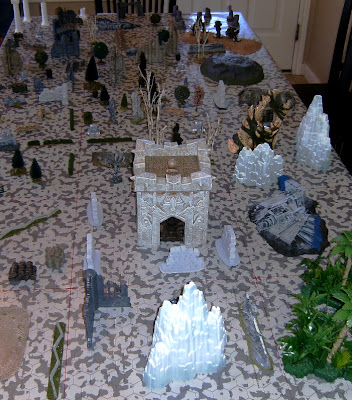 You can click on that link for a detailed report (or see what Da Baron had to say), and I will just talk about the Song of Blades and Heroes games we played on this great-looking table. 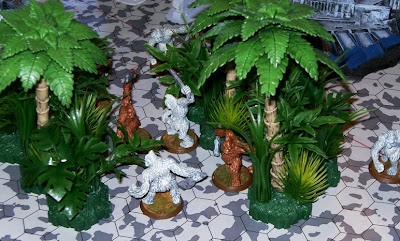 The first game was a campaign written for use with any set of wargames rules.  Two teams move from sector to sector searching for objectives and encountering surprises like terrain hazards or nonplayer warbands.  SoBaH such a dynamic game. 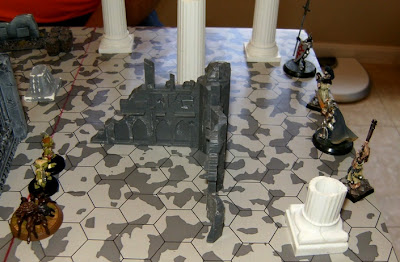 However, because of the nature of this scenario, there was only a single combat between player forces, and at close range it eliminated a lot of the maneuver that makes 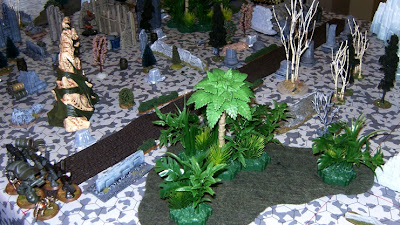 So we wrapped up that game, rearranged the table slightly, and set across from each other for a 2-on-2 battle--me and Da Baron against Holdfast and John. 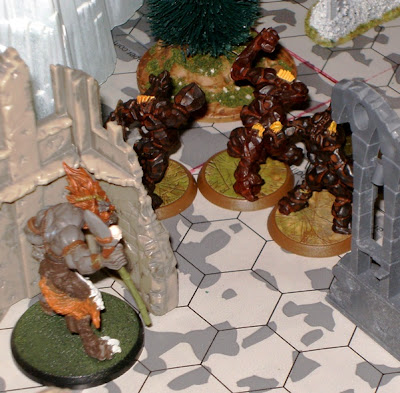 I had my Heroscape robot warband, Da Baron had his mercenaries and wizard with elementals, Holdfast had his assassin team, and John had a goblin warband featuring some of my Pathfinder minis. 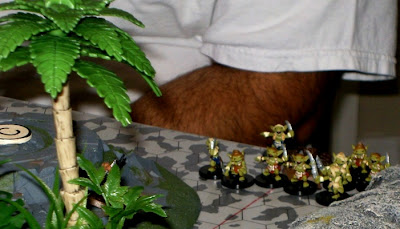 Holdfast's assassins held off the lava creatures for quite some time before eventually falling to them. 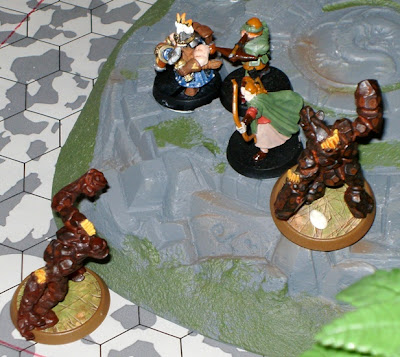 The robots' shooting was ineffective, so they decided to close the gap and fight the goblins close-in. 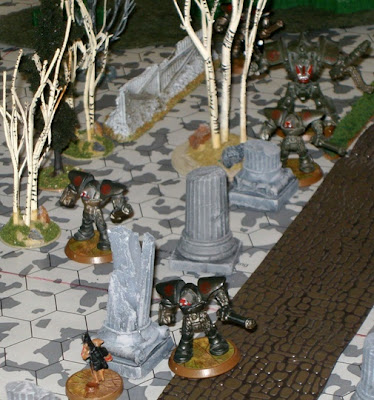 Holdfast's dark elf leader holed up in this Mage Knight tower for awhile, but then came back out to melee with the robots. 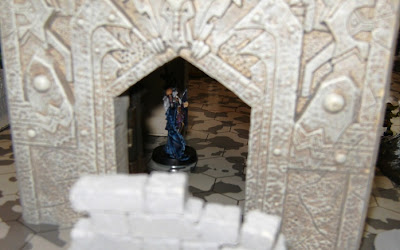 An elemental got a gruesome kill on one of the goblins, forcing the leader and the rest of that warband to flee. 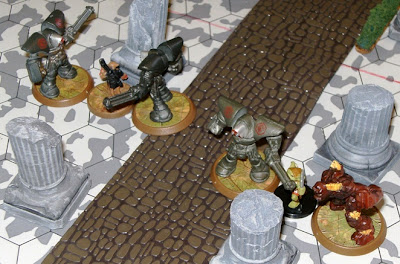 While the goblins' spider proved tough, it eventually died.  The dark elf got up and fled, handing victory to the robots (and their allies). 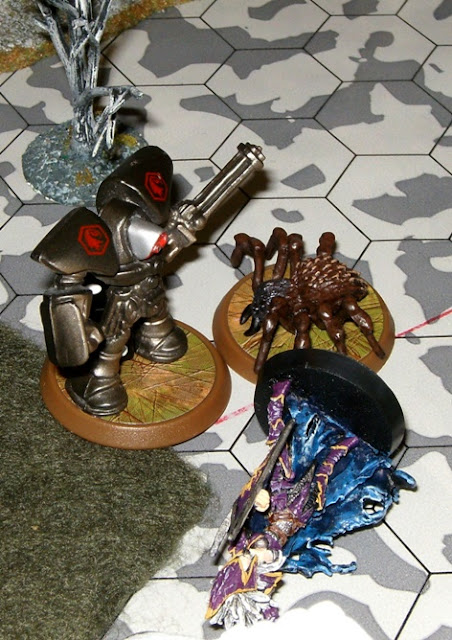 It was a very fruitful day of gaming.  My thanks to our gracious host and our fellow players.  I can't wait to play Song of Blades and Heroes again.
Posted by Desert Scribe at 9:43 PM No comments: