Where'd these figures come from? 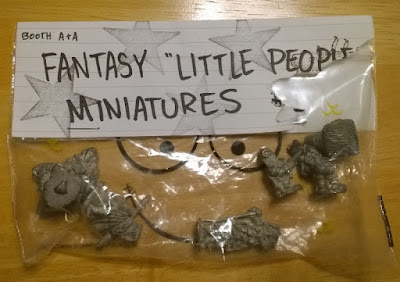 I stumbled across a bag of miniatures (presumably for D&D) in a secondhand shop recently, and for three bucks I had to scoop them up. 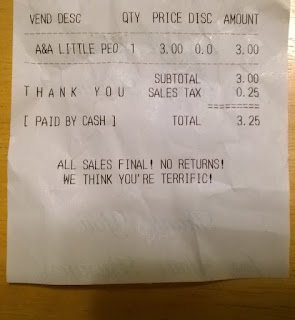 All the castings exude an old-school vibe. There's this dwarf on a throne: 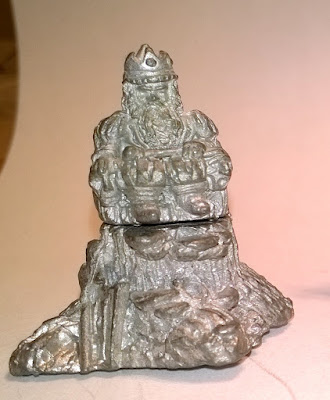 And a pair of halfling scouts, that looks familiar, but I just can't place it: 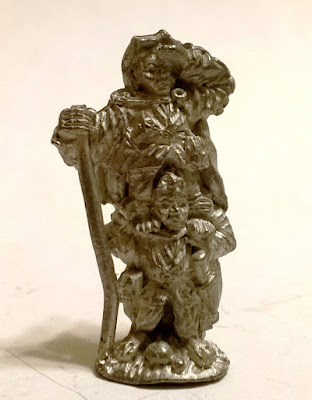 As well as another dwarf, with spear and shield: 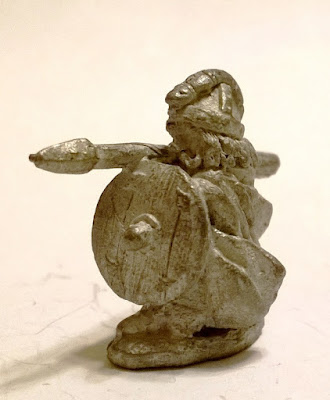 Along with two more short guys, dwarves or gnomes: 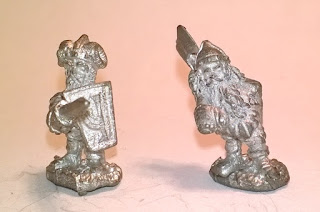 Any idea as to manufacturer or range? I'm curious about where these guys originated.
Posted by Desert Scribe at 10:52 PM 3 comments:

From last year, here are a couple of structures my brother and I are working on for his Zombieville table. 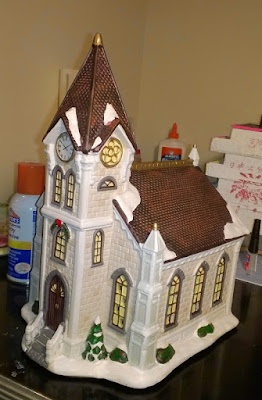 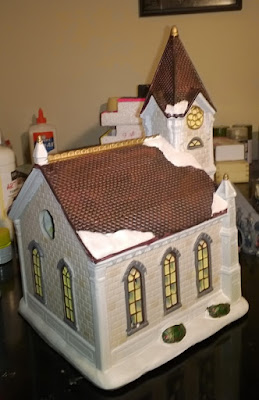 As you can see in these before pictures, this church started out as a Christmas village decoration.
Paint the snow green, touch up the stained glass windows, and you've got a building that isn't quite as seasonal, and can be used in a game with 28mm figures. 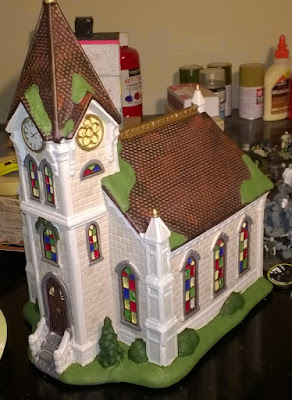 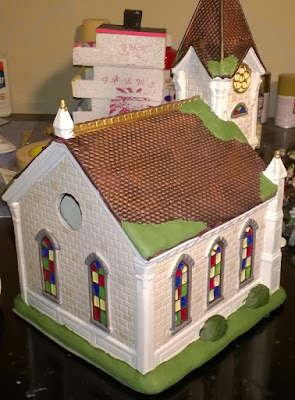 There's also this three-level parking garage from an MDF kit. As the top two floors are removable, this structure should make for some interesting battles. 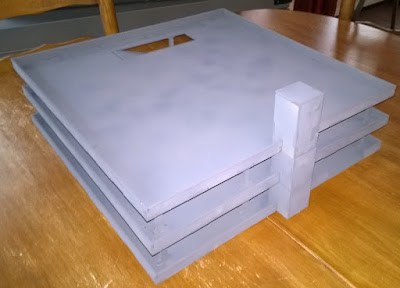 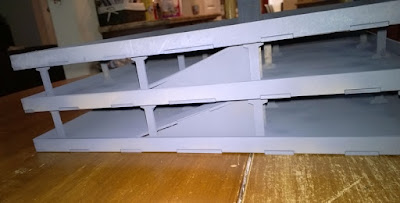 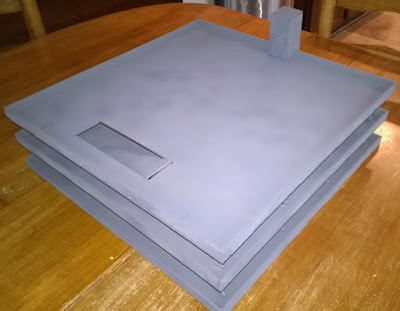 We haven't actually playtested my brother's scenario yet, but the game will certainly have plenty of scenery to interact with.
Posted by Desert Scribe at 9:00 PM 4 comments: 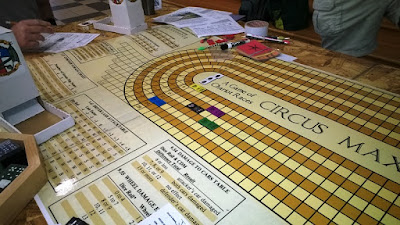 A couple of weeks ago I took my brother and my niece to Mag Con, a gaming convention that serves as a fundraiser for one of the schools in New Caney. My brother was anxious to introduce his daughter to gaming, and I knew just the event to draw her in: Circus Maximus! 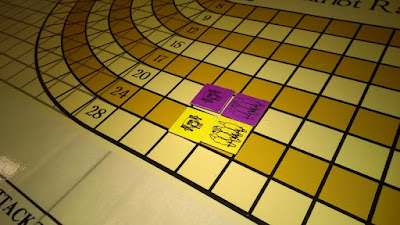 There were four of us old guys playing, along with my niece. Of course my brother and I tried to kill each other in this game, and the other two veteran gamers did the same. 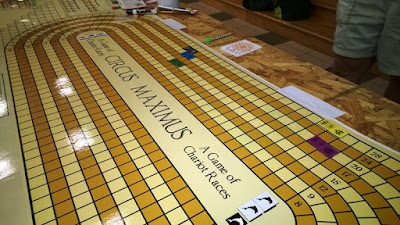 But while we were all intent on knocking each other out of the race, the girl kept her eyes on the prize and ended up coming in first place in her first game at her first convention. 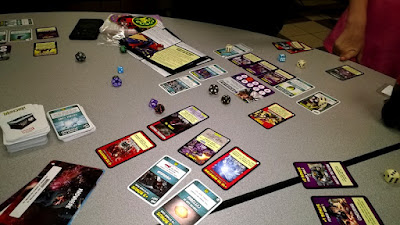 I knew another game she would like: Steve Jackson's Munchkin. They were demoing the Marvel version of the game, so it had some superheroes that she was familiar with, and the gameplay was simple for her and my brother to pick up. There were a total of six players, and while we all tried to stab each other in the back, my niece again won the game. 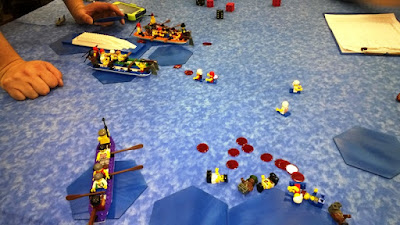 Some other games I saw but didn't play included this Lego whaling scenario, which I had seen at Millenniumcon. It looks like fun, and I will have to try it this fall if it's on the MillCon schedule. 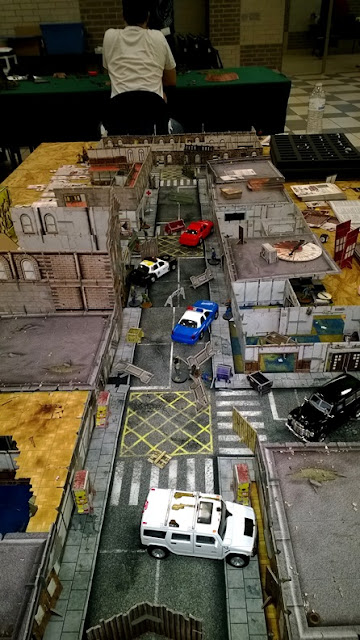 There was also a Walking Dead game, but no one was playing when I shot this photo. Looks good, anyway. By this time, we had to go, but not before my brother--who went into the game thinking he would hate it--bought a copy of Munchkin. He and my niece had a good time, and I hope this means we have a new gamer. 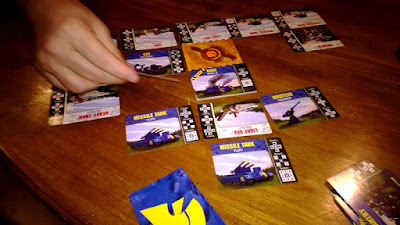 As a bonus, the next morning my brother and I played a quick game of Ogre: Objective 218, an Ogre-themed card game. A nice way to wind down a weekend of gaming.
Posted by Desert Scribe at 10:18 PM 1 comment:

Frostgraving for fun and profit 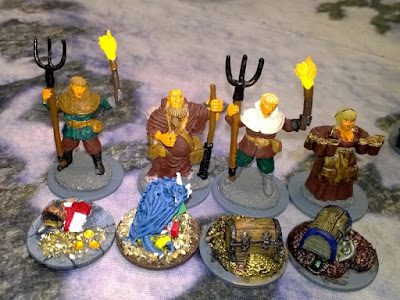 My wizard and her warband came out with a good haul from last week's Frostgrave scenario. We played the Ghoul King scenario in our Lich Lord campaign. 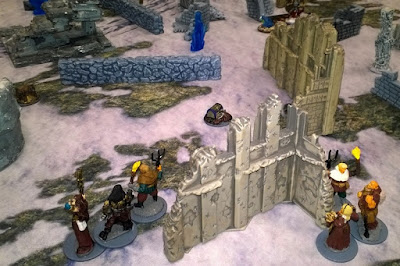 We started out sealed underground with the Ghoul King on his throne in the center of the chamber. While my wizard and her apprentice led the soldiers toward some nearby treasure, Stout joined the warband's two shooters, Bowman and Quarrel, to go distract the undead monarch. 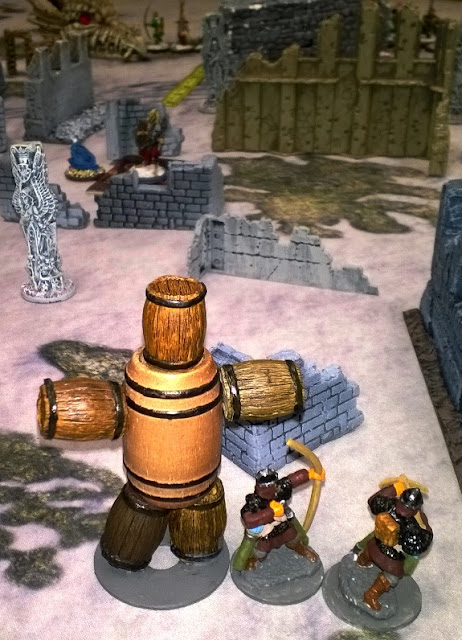 This plan turned out incredibly better than I expected, with the archer rolling a natural 20 to kill the Ghoul King where as he sat, leaving the treasures near his throne open for the taking. 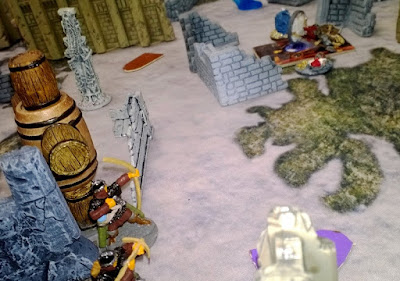 Read more »
Posted by Desert Scribe at 11:12 PM No comments: