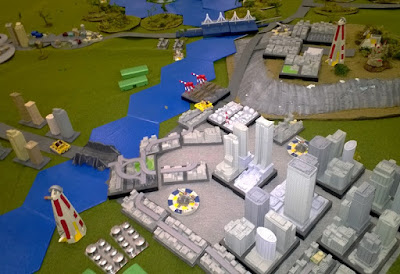 As usual, I'm late in posting this game from last month. Jeff, another Ogre player who took part in my Monopolis scenario last fall, met me at Dragon's Lair for some Ogre minis action. 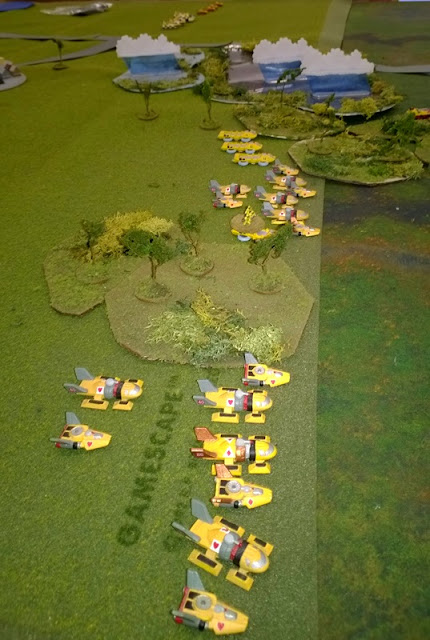 Jeff brought his nicely painted miniatures, both Combine and Paneuro. He also brought some wonderful city terrain from Japan, that goes by the name GEOcraper. 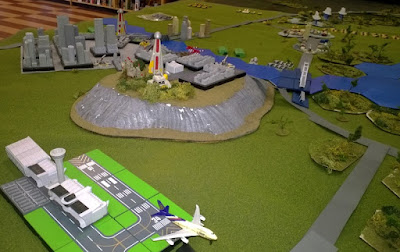 I played the city's defenders, and Jeff brought in an attacking force twice as strong. We got into a destructive battle here where the road passed by a lake. 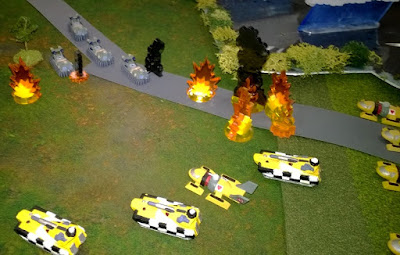 But the attacking GEVs outnumbered my defenders, and they began to close in. Not pictured are the several Ogres approaching down the road (sorry, the photo came out too blurry to post). 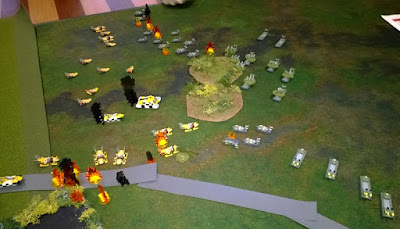 I had to leave soon after this picture. But with the additional forces coming in, the defenders were sure to take a beating. I hope to play again soon.
Posted by Desert Scribe at 8:46 PM 1 comment: 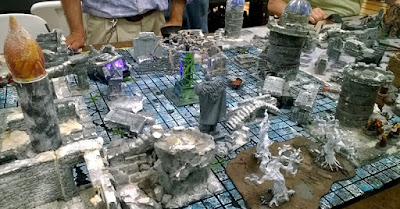 Another game of Frostrgave, this time the Bone Wheel. Note the fancy paving for the gaming surface. One of our players, Yosef, cut and painted some blue insulation foam to make a nice cityscape. 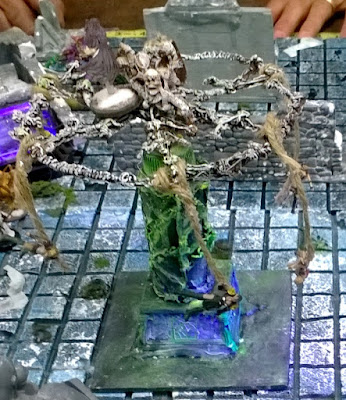 He also constructed the bone wheel that gives this scenario its name: A rotating circular device with six bodies hanging from it. 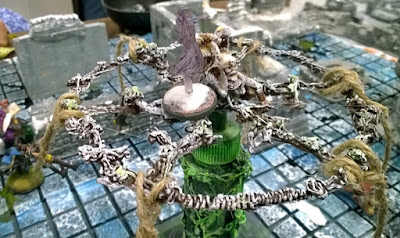 There was also a couple of banshees that ended up not causing too much trouble for me or for Yosef. Of course, we could concentrate on the undead since we were not trying to kill each other this game. 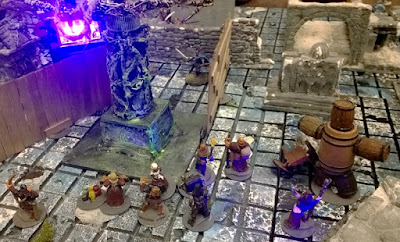 Since this was a two-player scenario and we had four players show up, the other two participants played on another board with a second bone wheel. They might have beat up on each other a bit. 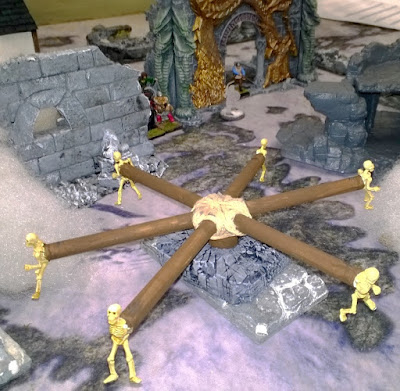 With this scenario complete, it's time to take on the Lich Lord itself!
Posted by Desert Scribe at 10:11 PM No comments:

The cauldron and the cultists

Time for another Frostgrave battle report. This time, in our Lich Lord campaign, my wizard stumbled across a group of death cultists atop a hill, performing an unholy rite around a dark cauldron filled with vile necromancy. 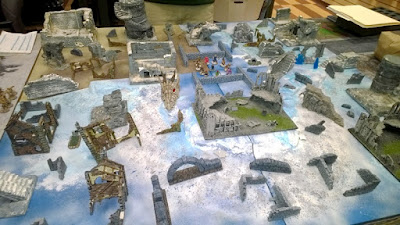 Of course, there was plenty of treasure laying around, and apprentice Vega Brewer sent Stout, Frick, Bowman, and Smith to secure a nearby pile of loot. 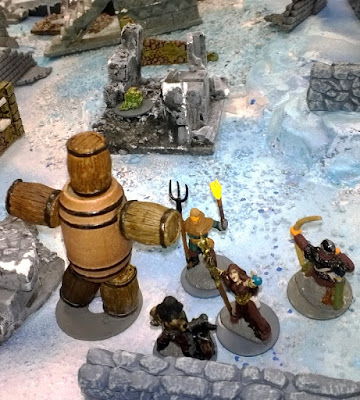 The Frozen City has many features, including this waterfall locked into ice. 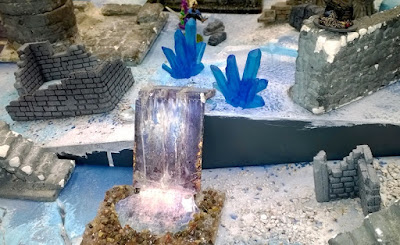 Meanwhile, the wizard Spica "Spike" Brewer, sent her apothecary, Gertrude, to quickly get another treasure off the battlefield. 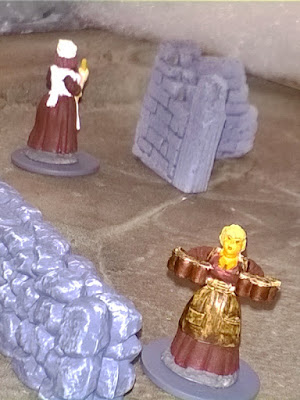 The apprentice ended up leading her soldiers close to the cultists' ceremony, then used a wall to isolate many of them as another wizard's party took them on in hand-to-hand combat while Smith fought a zombie summoned from the cauldron. 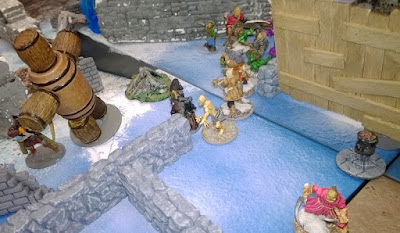 On the other side, a third wizard's group fought the death cultists as well, while my troops fired missiles or cast spells from a short distance away. 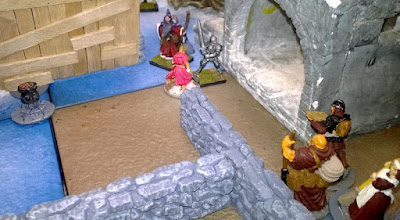 Soon after, the other wizard tipped over the cauldron (and got the experience points), with the cultists all out of commission. 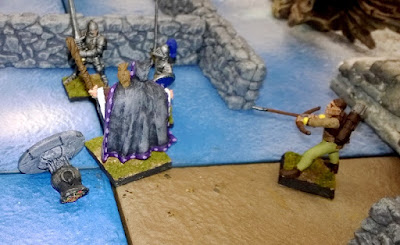 Again, I managed not to lose any soldiers, as we marched on toward the penultimate scenario in the Lich Lord campaign.
Posted by Desert Scribe at 9:00 AM No comments:

Catching up with Frostgrave

I've been neglecting to document my Frostgrave gaming, so allow me to present this update from the Frozen City filled with fantastic treasure: 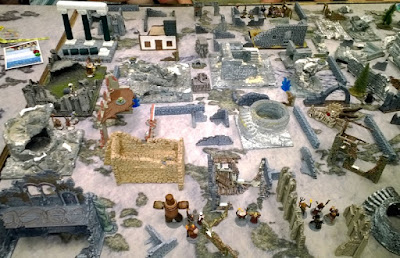 As our Lich Lord campaign takes place on alternating Thursdays, a few weeks ago we played generic. non-LL Frostgrave scenario. I like the look of the table with all the ruins; it really conveys the feel of a fallen city. 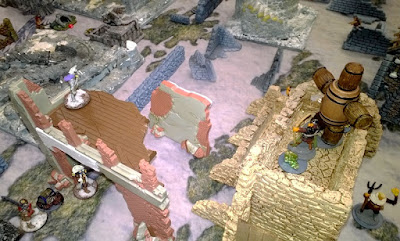 There was a light of fighting over treasure in this game, and the fact that there were several multi-level structures gave us all a chance to try new tactics. 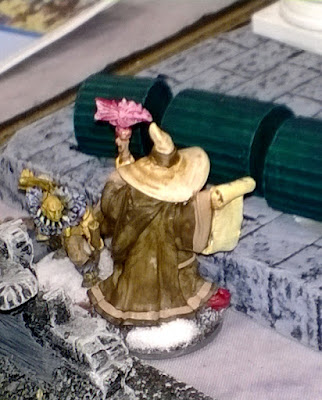 This was a three-player game, with a chance for treasure or random creatures when we took an action to search certain locations on the board, such as this dragon skull (that concealed a werewolf). 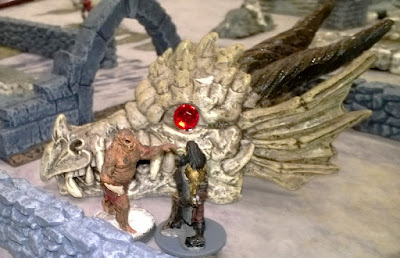 These large crystals also held monsters, posing a problem for my opponent (and keeping him distracted from me). 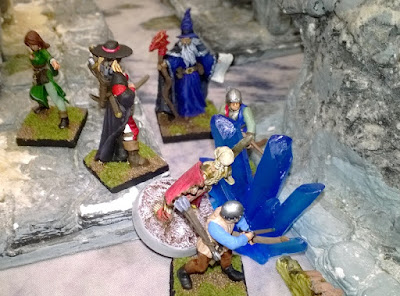 In the end, my wizard's band escaped relatively unscathed, with several more treasures and a lot more experience. More updates to come ...
Posted by Desert Scribe at 6:23 PM No comments: