It's been far too long since we've seen any Super Galactic Dreadnoughts for which this blog is named, so here are some photos of four of these vessels on maneuver near the Pleiades. 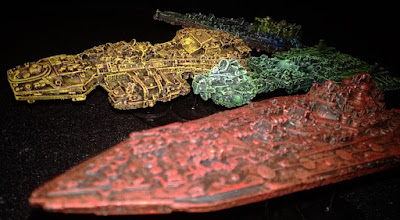 The red starship in the foreground is a Terran Transsolar Federation Victory-class SGDN.

That green colossus is a Gryphon-class warship from the Avarian United Worlds.

The iridescent craft is a Swarm-class Super Galactic Dreadnought of the Entomalian Empire.

And the yellow vehicle ready to pounce is a Polecat-class ship from the Carnivoran Republic. 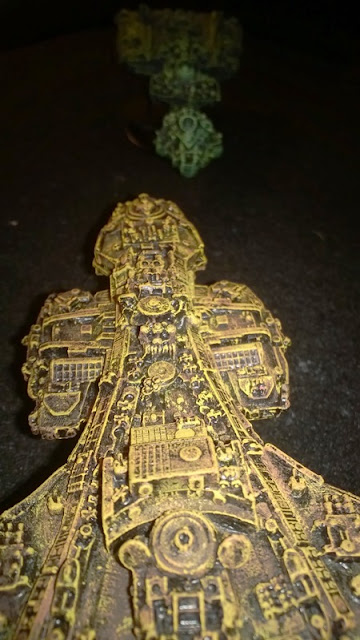 I'm still missing one class of Super Galactic Dreadnought from the Five Powers: the Aquarian Alliance's Typhoon. The manufacture doesn't make these huge castings in metal any more--just resin. So if anyone knows where I can get myself a metal version of the Typhoon, please let me know.
Posted by Desert Scribe at 9:54 PM 1 comment:

I've decided to build an Oldhammer army. OK, several armies. One of them is Lizardmen, since I got a whole bunch of them really cheap one time. And while I have plenty of rank-and-file, I needed a suitable hero figure. I didn't want to pay premium prices for a Games Workshop model, and browsing my local game store I came across this guy: He's a Lizardman Warrior from the Reaper Bones line of minis, and I think he fits in nicely with the GW plastics. Here he is posing with a Skink and a Saurus: 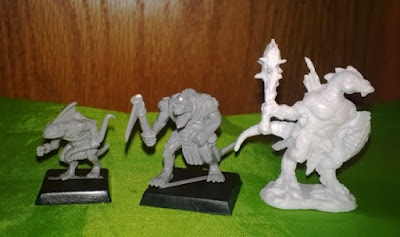 Suitably imposing, as a hero figure should be, and he fits in style-wise to me. Once they are all painted, they should look good as a cohesive force on the tabletop.
Posted by Desert Scribe at 9:30 AM No comments: 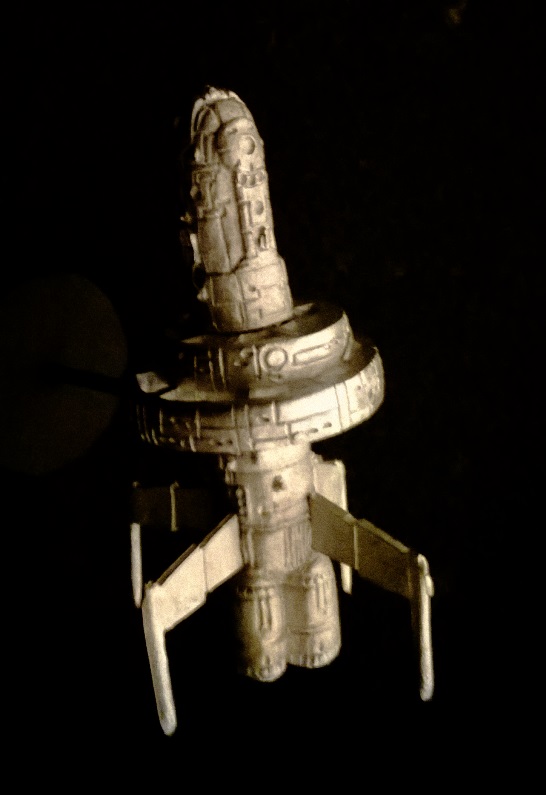 Much like this ancient colony slowboat (note the rotating rings to provide centripetal force--the starship predates artificial gravity), the Dreadnaught is chugging along. I'm still getting organized after a move, but I hope to have more miniatures projects (spaceships, Ogre, and Oldhammer) and more gaming (same) to talk about soon.

Meanwhile, what do you think is the backstory for this interstellar vessel?
Posted by Desert Scribe at 9:48 PM 2 comments: