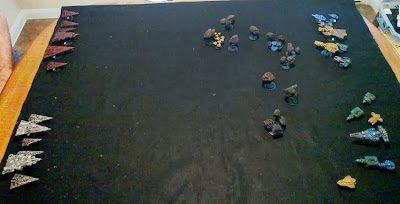 Last week my brother and I played some 5150: Star Navy.  We decided to play on the same side, each taking a six-ship human mercenary fleet.  We rolled to see what our Hishen opponents had.  Unfortunately, our adversaries outnumbered us--and outgunned us, with one Class 6 vessel, while our largest ships were Class 5s. 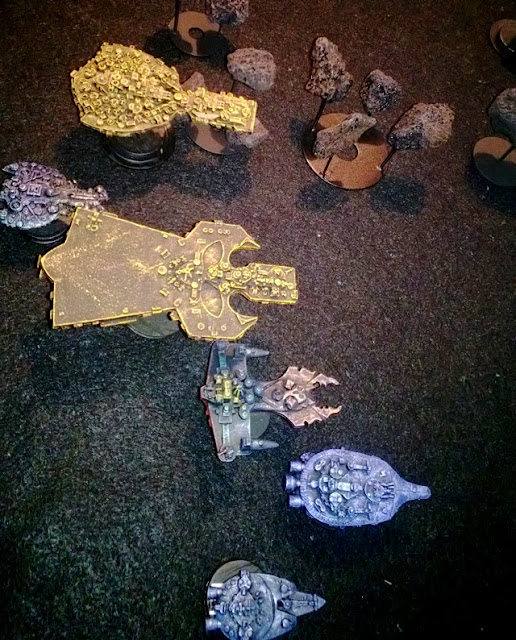 The asteroids did shield my brother's force (the red ships) from the enemy's fire at first.  I wasn't so lucky, as the Hishen got the initiative and their Class 6 Planetary Conquest Ship blew away my carrier before it could launch any fighters.  The captain of one of its escorts, seeing the destruction, decided he didn't get paid enough for this, and fled the battle. 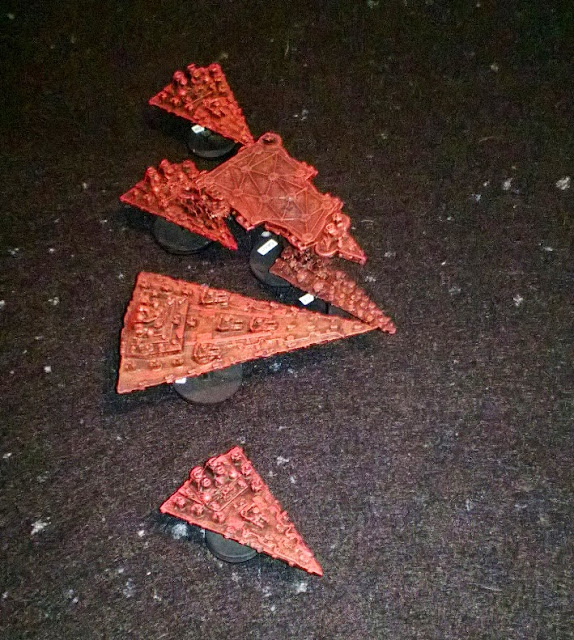 The game was pretty much a foregone conclusion after that, but we fought a delaying action and took out a few Hishen escorts.  Some of my brother's fighters did damage the big enemy bad guy, but it wasn't enough to drive it away from the battle. 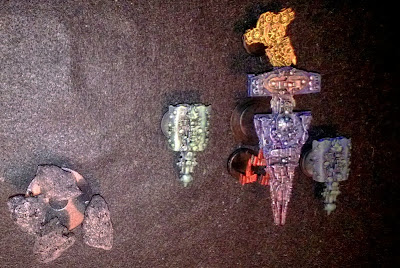 We called the  game, which was a major Hishen victory.  They destroyed my two capital ships and drove off several escorts.  We only destroyed or forced to flee three of their escorts.  Next time, we're bringing a dreadnought of our own!
Posted by Desert Scribe at 9:09 AM No comments: 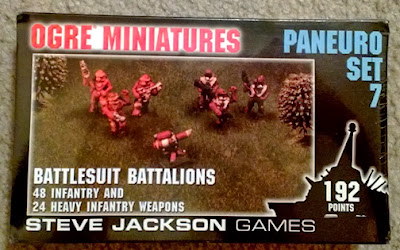 At a Houston game store last week, I chanced upon some OGRE Miniatures boxed sets, the kind Steve Jackson Games stopped producing some years ago, and I picked up this box of powersuited infantry.  I've been meaning to obtain more infantry figures, and this package delivers.  It holds 72 infantry figures (each mini representing a squad of troops in OGRE/GEV) and also comes with 24 heavy weapons so I can add some long-range punch to my infantry squads.

I don't play the straight-up minis rules; instead I use the figures on the large maps that came with the Deluxe OGRE and Deluxe GEV sets.  With the new edition coming out soon, I plan on snagging a couple of new maps for some huge battles.  And I'll have plenty of infantry to hold all that ground.
Posted by Desert Scribe at 8:30 AM 2 comments: 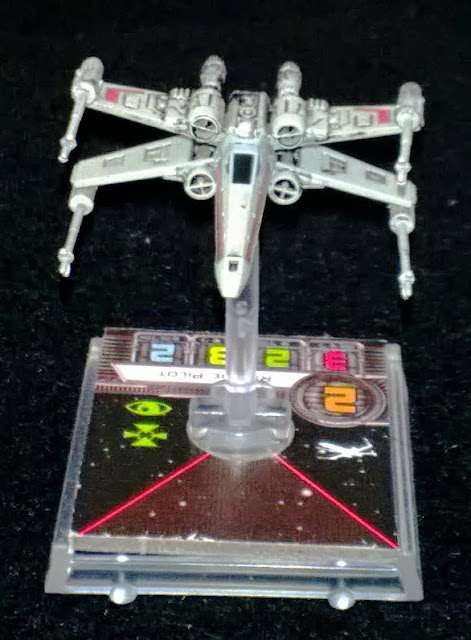 My brother was kind enough to buy me the X-Wing miniatures game from Fantasy Flight Games.  Over the weekend, we took it out of its box and played the introductory scenario, which only used some of the rules. 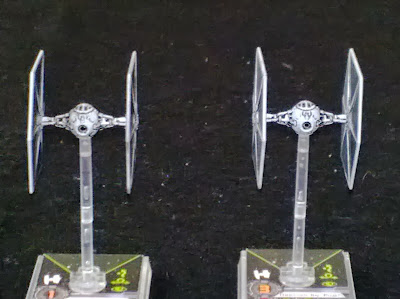 My brother took the X-wing with a rookie pilot, and I had the pair of TIE fighters, with one Academy pilot and one Obsidian Squadron pilot.
Read more »
Posted by Desert Scribe at 9:58 PM 2 comments: 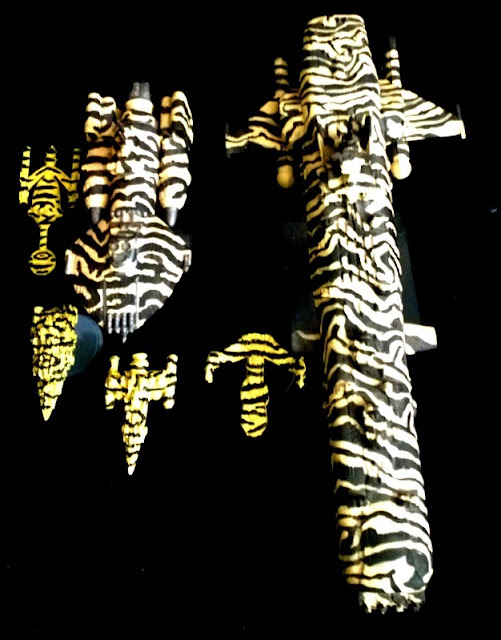 GNN--The Capellan Raiders have assembled a raiding fleet that is terrorizing the Fourth Ring.  The capital ships are custom hulls from the shipyards of the Brazos Evil Empire.  The escorts include a starbomber and star armored pursuit ship acquired from the Terran Transsolar Federation, a Star Raider from the Garrison system, and a Sathar destroyer. 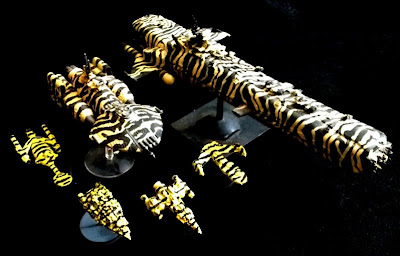 No word yet on which system this force is headed toward, but Lloyd's has ceased to issue insurance on all unescorted merchant vessels in the sector.  A consortium of shippers is looking to hire at least one Free Company task force to protect its transports.  More on this story as it develops.
Posted by Desert Scribe at 9:40 PM 3 comments:

Here's how I'm going to base my Space Invaders army for Hordes of the Things.  (In case you missed it, these figures come from packs of erasers I bought before Labor Day.) 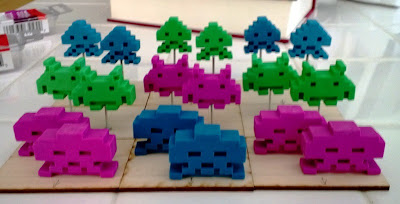 I need to texture and paint the bases; I plan on leaving the figures themselves in their original colors.  While they will all be the same type of element, regardless of which type of invader they are, I'm still debating on how to classify these creatures:
I definitely don't want to do Hordes, because then I would have to come up with another dozen stands of figures.  Right now I'm leaning toward Flyers, because I think that's the best fit for invaders from space.

I currently have enough erasers for nine stands of Invaders, adding up to 18 Army Points.  The saucer from the game will provide another 3 AP as an Airboat and serve as the general.  Since there wasn't any kind of saucer eraser for sale, I'm making this myself from a wooden disc, which I hope to show you soon.

That leaves 3 AP to bring the army up to full strength.  I have an idea of what I'm going to do to fill that gap, but I'm saving it for a surprise.
Posted by Desert Scribe at 10:00 AM 6 comments:

Email ThisBlogThis!Share to TwitterShare to FacebookShare to Pinterest
Labels: Hordes of the Things, Space Invaders

Seven games in one Traveller supplement

Another weekend, another great find at Half Price Books.  This time, it's a booklet reprinting the rules for seven sci-fi boardgames by Game Designers Workshop, the company behind Traveller.  Titled Games 1-6+: The Classic Games, this book came out in 2001, in the same format as the Traveller roleplaying book compilation.  Instead of RPGs, however, it contains hex-and-counter games, with images of the hexes and counters. 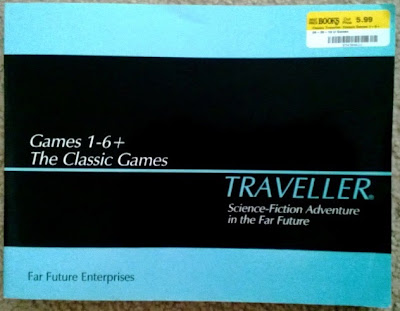 This tome includes the games Imperium (Game 0, strategic interstellar war predating Traveller itself), Mayday (ship-to-ship space combat), Snapshot (close combat aboard starships), Azhanti High Lightning (battle for control of the eponymous fleet intruder, with 14 deck plans), Invasion: Earth (the final battle of the Solomani Rim War), Fifth Frontier War (battles for the Spinward Marches), Dark Nebula (based on the Imperium game system), and Striker (not a boardgame, but a set of rules for use with 15mm miniatures). 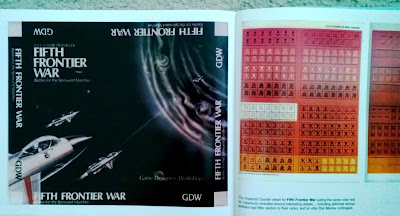 In addition to the rules for all these games, the book includes color reproductions of cover art, counters and game boards.  Unfortunately, many of the maps aren't all that hi-res﻿, so I probably won't be able to play all of these games.  Still, it's a great look at the history of the Traveller universe, and who knows--maybe I can convert some of them to minis play.
Posted by Desert Scribe at 6:23 PM 2 comments:

Fleet and ship names from the GCC game

I had six players for my 5150: Star Navy game at GuadaComaCon.  Each gamer had an identical Free Company fleet, consisting of one battleship, one fast attack carrier, and four light cruisers.   The game was well-received, and I had fun running it.  As usual in my scenarios, I had the players christen their ships and name their fleets.  Here's what they came up with:

I think naming your forces gives you a little more investment in the scenario.  I'm curious: Do you (as a player) name your individual ships or (as a referee) have the players name their ships?
Posted by Desert Scribe at 6:44 PM 1 comment: