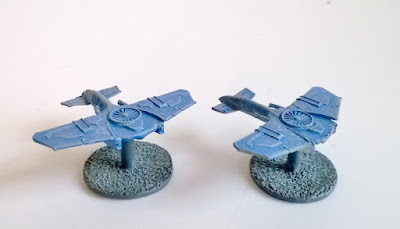 Here are a couple of unmanned aerial vehicles I plan to use for sci-fi armor gaming in general, and for Ogre/GEV in particular. 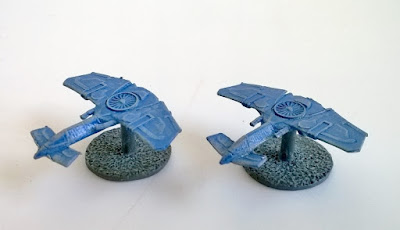 These castings started life as Kikyu gunships from Reaper's CAV line of science fiction combat vehicles, but for my games they will make great unarmed recon drones. I can see them scouting in the skies around Monopolis. 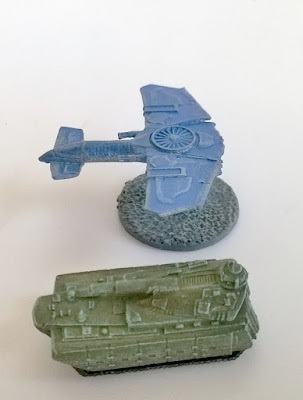 They fit in fine with the existing Ogre miniatures, as seen here, and I've come up with some simple spotting rules: All attacks on enemy targets within two hexes of the UAV get a +1 to their rolls. The downside? Any enemy attack automatically destroys it. 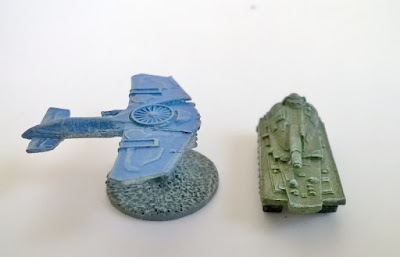 Here are the Ogre/GEV stats for the pilotless reconnaissance aircraft:

What do y'all think? Is this something you'd allow in your Ogre games?
Posted by Desert Scribe at 6:04 PM 3 comments:

Zentradi vs. Space Invaders: Only in HotT 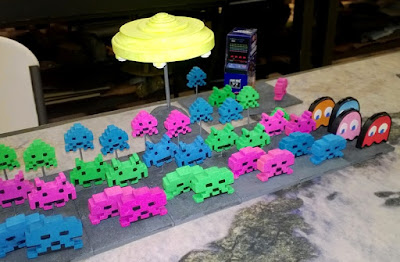 I had a chance to play Hordes of the Things on Wednesday, and when I told my opponent I was bringing my Space Invaders army, he responded that he would bring something suitable; he just wasn't yet sure what that would be. 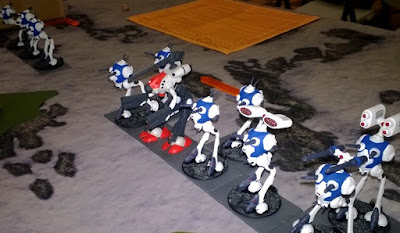 So as a longtime Robotech fan, imagine my delight when he arrived at the game store with these Zentradi models from the Robotech RPG Tactics game. The seven battle pods were Riders, based on their mobility in the cartoon; the three missile pods were Shooters; and the officer's pod was a Hero general, true to the series. 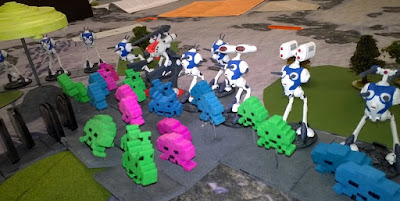 The arcade aliens (15 stands of Hordes, two elements of Sneaker ghosts crossing over from Pac-Man, and the Airboat general saucer) advanced from their video game cabinet stronghold to meet the anime aliens, the two lines crashing into each other. After chewing through the Hordes, the Zentradi officer sent both Sneakers fleeing. 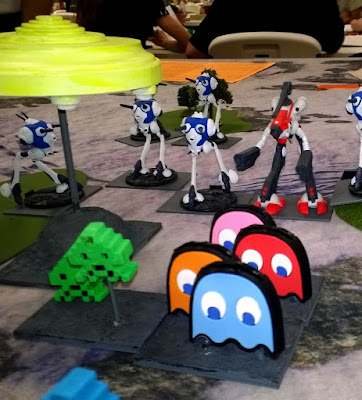 True to the electronic game, the space invaders quickly respawned, but the Zentradi kept advancing. Meanwhile, I could not get enough pips to get my Sneakers and Airboat in position to take out the enemy leader as I had planned. 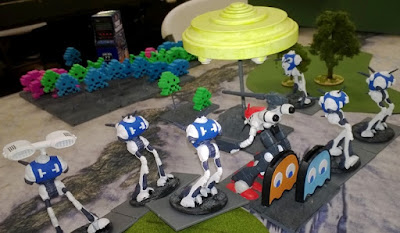 Soon after, the opposing Hero general initiated combat with my Airboat general. While it survived a couple of rounds, the odds were against it, and the saucer finally was shot down (for variable bonus points), giving my opponent the victory. 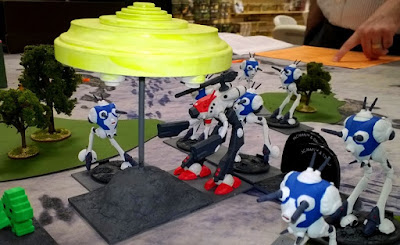 Although I never destroyed a single enemy element, it was still a close game; and my opponent and I had a great time playing with our unconventional armies. That's the great thing about HotT--it gives you a chance to get creative (and even a little silly) while still having a competitive match.
Posted by Desert Scribe at 11:15 PM 3 comments: