Pictures from an Ogre game 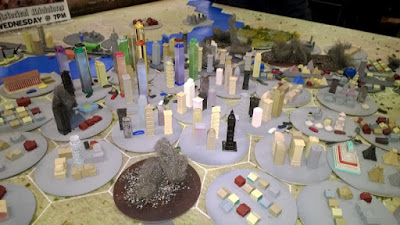 Last month I brought my Monopolis setup to the game store and put on an Ogre scenario of three cybertanks (Mark III, Mark III-B, and a kitbashed Ground Effect Ogre) attacking the peace-loving urban area defended by about 20 armor units and around 30 infantry squads. 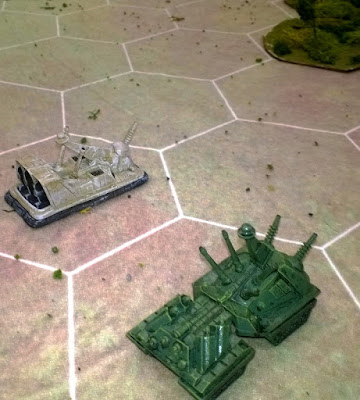 Each Ogre had a separate objective, determined randomly. In a variation of "Kill the Command Post," their job was to get in, destroy the target, and get out. The defenders job was to stop, and destroy if possible, the attacking machines. 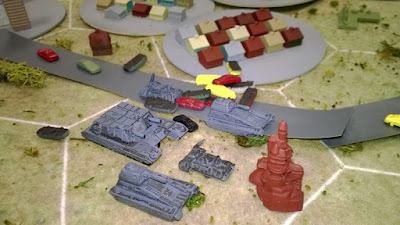 The defenders suffered from spillover fire when they parked multiple units in the same hex. They did use their infantry to great effect, keeping them behind cover in the town hexes until the last minute. 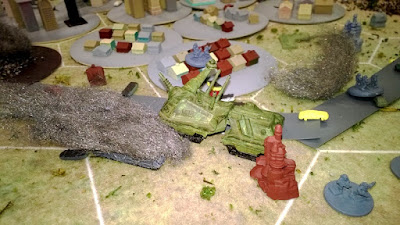 Unfortunately, the defenders didn't ever bother to fire on the GEOgre, so I'm still not sure if I need to tweak its stats or not. The hovercraft cybertank used its speed to go around one side of the city and then up the river, eliminating targets far inside the city with its main battery. 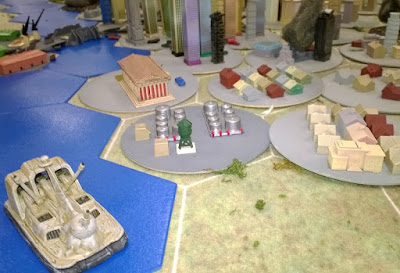 In the end, the Mark III and the III-B were both slowed down, but trudged off the map after eliminating their targets. It could have gone the other way if the defenders had a couple of better dice rolls, but I probably need to give them a few more armor units and infantry. 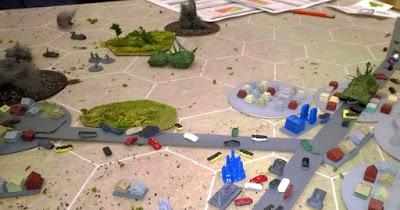 All in all, there were four players, only two of whom had played the game recently. I had fun running the battle, and it helped me get back into the grove for my MillenniumCon scenario--which will have room for ten players! See you at the convention in November.

Defeat of the Lich Lord 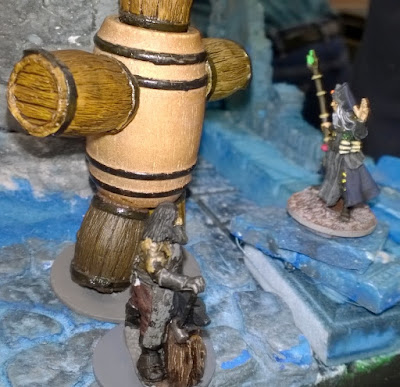 Several months late, here's a brief recap of the culmination of our Thaw of the Lich Lord campaign for Frostgrave. After our wizards and their warbands gained experience and treasure and arcane knowledge over the previous campaign outings, the final battle against the big bad guy (above on the right) took place on a section of city that was magicked up into the sky, tethered by four large chains. 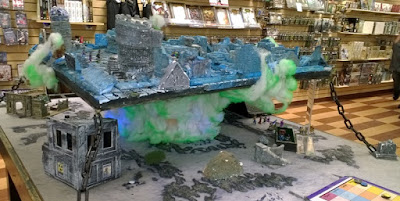 Yosef, the group's terrain maker, did a great job with a raised platform on which we placed the usual Frostgrave terrain, including a throne for the Lich Lord himself. 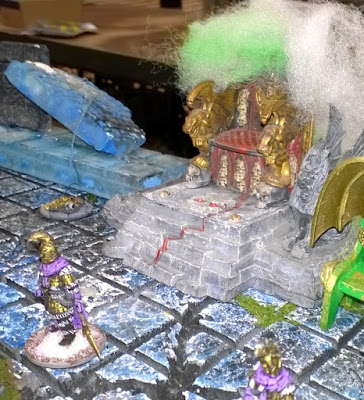 The battle was rough. It was me and a second player taking our warbands, while a third member of the group played the Lich Lord and his minions. The game didn't go too well for me, as that undead spellcaster (again at far right) managed to take out both my wizard (center) and her daughter apprentice (far left).

In the end, though, soldiers from my warband with help from the other player surrounded the Lich Lord, and it was my humble apothecary, her arms filled with healing draughts, who struck the final blow to end the Lich Lord. 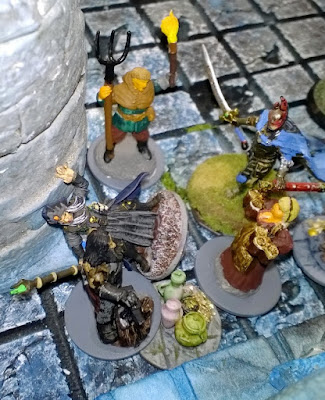 It was a fun campaign, and we're still playing Frostgrave. However, we retired our wizards and started again from level 0, seeing where our adventures take us this time.
Posted by Desert Scribe at 10:08 PM 3 comments: