The last of the Ogre minis ... 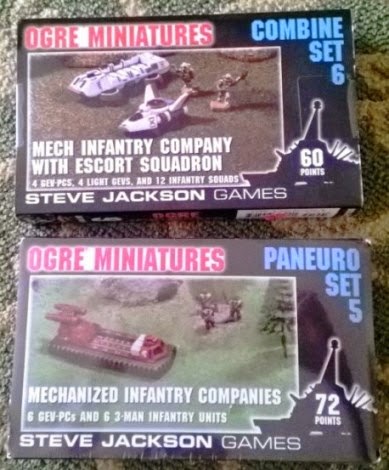 ... OK, maybe not the very last, but certainly some of the few remaining unsold Ogre Miniatures boxed sets.  I picked these up at a Houston game store earlier this week.  I know I shouldn't be buying more metal, but I wasn't gonna let these slip away a second time.

You see, I had discovered three boxed sets still on the shelf last fall, and I snagged one of them at the time.  Now that Steve Jackson Games has stopped producing metal Ogre minis, I've been kicking myself for not purchasing those other two boxes when I saw them.  When I hit the game store on my way through town, I was thrilled to see the boxes still setting there, so I grabbed them.

Another game of D&D

Another dungeon crawl this weekend, with three players: Rickey, who went solo last time; Coach' and Coach's son, who is back from college and is new to the old-school RPG scene but familiar with online roleplaying games.  I'm running this campaign using the Holmes basic D&D rules.

Before setting foot in the dungeon, the players talked about hiring henchmen.  They found the down-on-his-luck Halfling, Banker Baggins (no relation) willing to join them for a full share of the treasure, however.  They also found a quartet of mercenaries--Marko, Darko, Sharko, and Lonnie--willing to work security for a flat 100 gold piece fee.  So three player characters (Coach's fighter Fred II, his son's thief Mavvelwinna, named after his World of Warcraft character, and Rickey's thief Alric), the NPC Halfling, and four men-at-arms set out for the dungeon.

Entering the underground chambers, they came upon a pair of large spiders in a room where other adventurers had slain a similar creature.  This time, one of the arachnids landed a bite on Fred II, who failed his save and fell unconscious from the poison.  Coach then took over Banker, as two of the men-at-arms toted the feverish Fred II around the dungeon--but not before Mavvelwinna relieved Fred of his money. 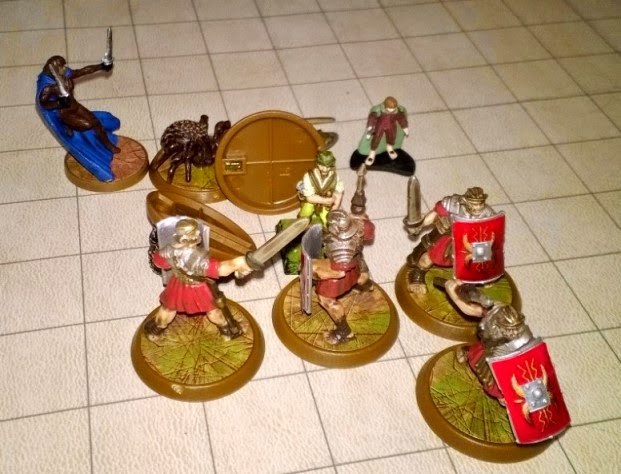 Their explorations took them through a red room that turned hot, a blue room that became cold, and a yellow room that grew bright.  They found a black leather cloak in a cabinet.  The adventuring party also encountered a couple of packs of giant rats in different rooms, prompting Coach's son to remark that he couldn't wait to get back to the tavern to boast of all the vermin they killed.  After dispatching one such group of rodents, the treasure-seekers managed to find a secret door and the trap it was connected to. 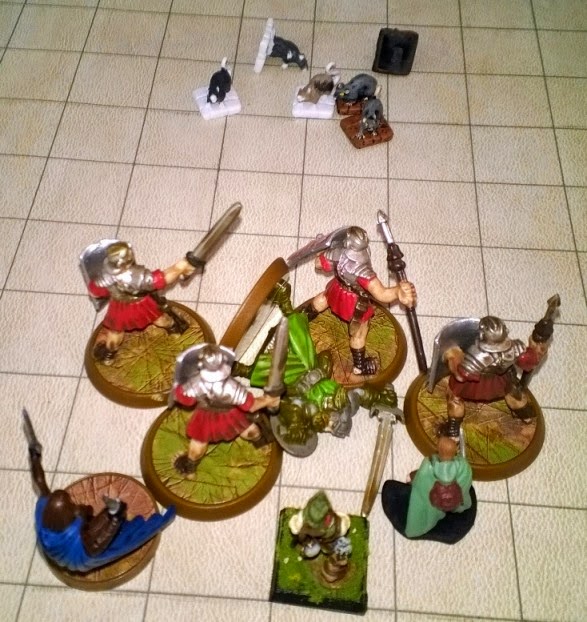 A search of the deactivated mechanism that shoots spikes out of the wall when the door is opened revealed an enchanted woodsman's tool known as The Ax of the Ranger and a thousand gold coins.  Heading through the secret door and down the corridor it revealed, they came into a room with six gnomes (soon joined by three more) who refused to let the adventurers pass without paying a toll.  The party refused and went the other direction, where they encountered a pair of berserkers.  The  adventurers managed to cut the berserkers down, but not before Mavvelwinna fell beneath one's sword. 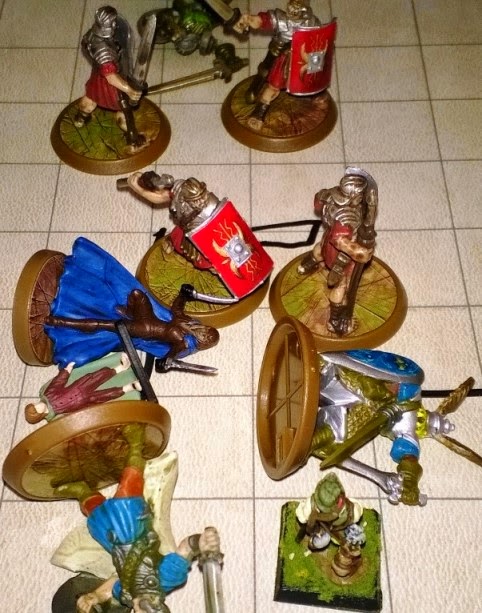 Banker was also knocked unconscious during the fight, so the group retraced their route and headed for the surface.  Of course, they managed to draw the attention of a pair of gnolls on the way out, but even though the adventurers and their mercenary bodyguards were all wounded, they managed to dispatch the hyena-men and make their way out of the dungeon.  The men-at-arms took their money and parted ways, and they were last heard muttering to one another that they needed to go someplace safe, like a war zone.
Posted by Desert Scribe at 10:29 PM 5 comments: 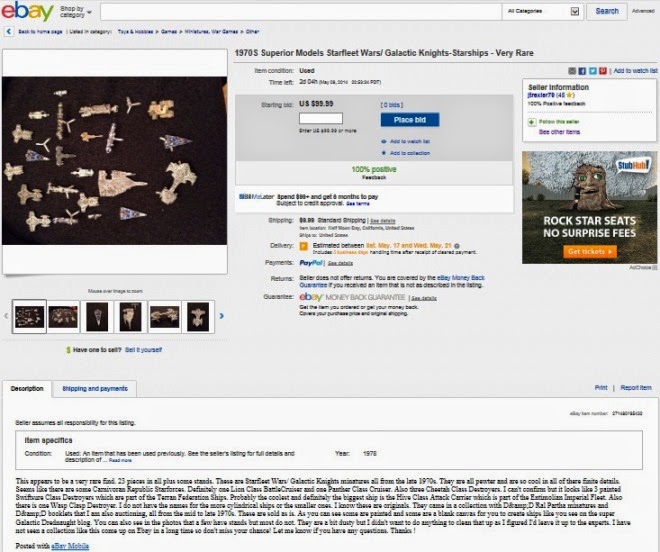 So I guess this blog is famous now ... 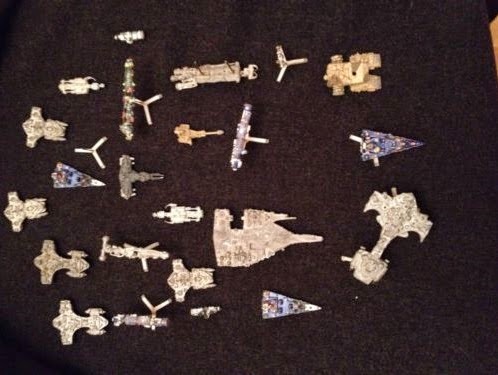 I saw this Ebay auction for a bunch of Starfleet Wars/Galactic Knights ships. Reading the description, I found a pleasant surprise: A shout-out to Super Galactic Dreadnought!

Seller jtrexler79 lists the various models included in the auction, mentioning they're sold as-is.  And then the vendor name-checks SGDN:

If you're having trouble reading it, here's the relevant sentence (emphasis added):
Thanks for the mention, jtrexler.  Anyone looking to buy some cool spaceship minis, go check this auction out, and tell 'em the Dreadnought sent you.  Now where's my royalties? :)
Posted by Desert Scribe at 9:26 PM 1 comment: 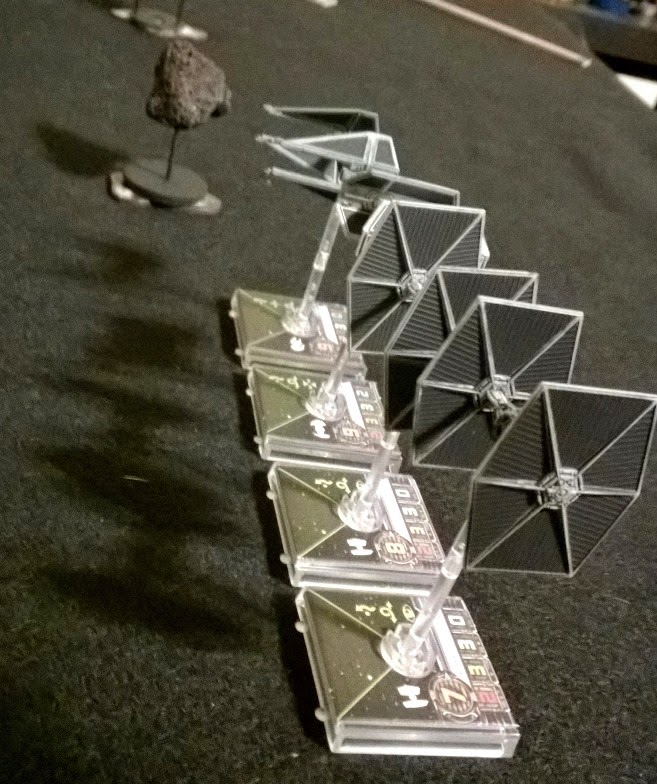 So to commemorate Star Wars Day today, here's a quick batrep from a couple of games on Saturday.  I went over to Steven's for some Warhammer 40,000, but other players never showed, so my host and I played two matches of X-Wing. 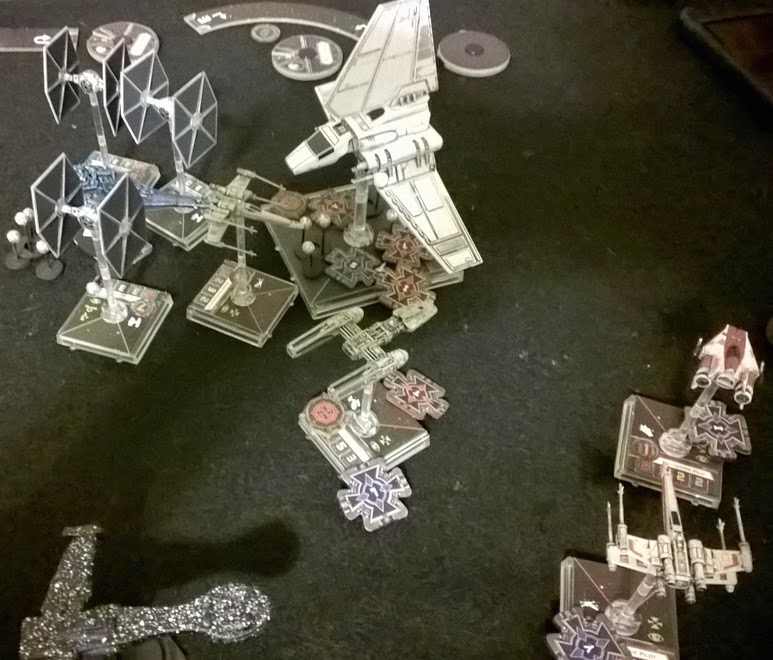 The first game was the scenario that comes with the Imperial shuttle rules, where the Empire player has to recover personnel stuck on disabled spaceships.  Instead of using the counters for the incapacitated vessels, I grabbed some of my other minis that were a good fit size-wise to serve as the objective markers.  I also brought my scratchbuilt escape pods to keep track of the people recovered, as this seemed better than using a sensor token from the game.  I was doing fine as the Empire, until my opponent blew up my shuttle, effectively ending the scenario in his favor. 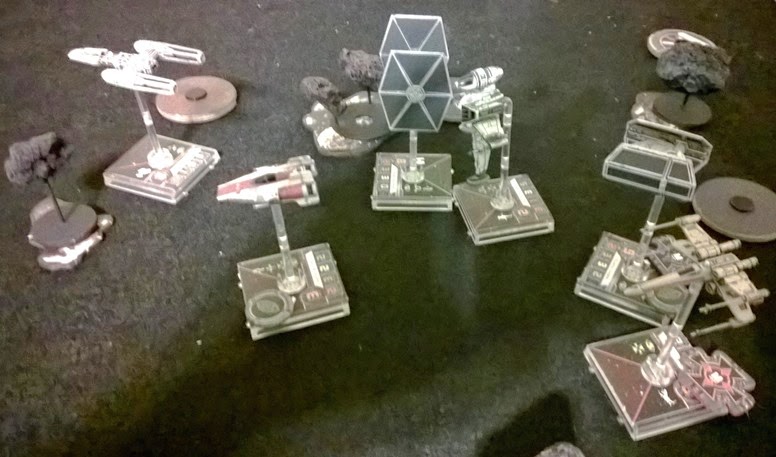 The second game was a straight 100-point squad contest, using asteroids (with my own space rocks on top of the markers that come with the game).  My host stayed with the Rebels for this game.  It turned into a real furball, with the asteroids forcing my foe to fly around a bit, taking some damage from the floating debris.  However, the Rebel went on to eliminate my ships one-by-one, until Vader was the only remaining fighter, taken out by Luke Skywalker and friends.  An enjoyable time, and I think I have a new X-Wing convert!
Posted by Desert Scribe at 9:55 PM 1 comment: