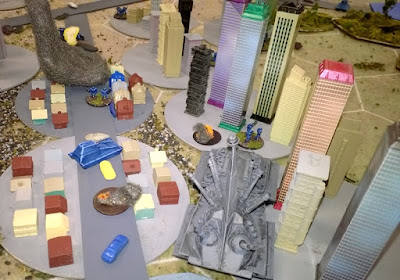 My last Ogre game was over a month ago. I used my Monopolis setup and used the forces from the Mark V Attacking scenario in the original rules. But instead of killing the command post, the cybertank had to get all the way across the long axis of the map with four of its missiles. 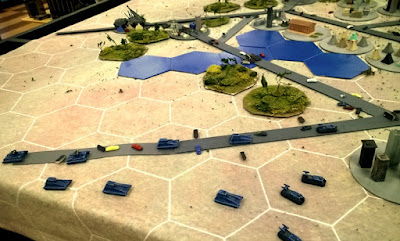 I took the Ogre, while Wes played the defenders and tried to intercept me. However, I used the roads and terrain to make sure he couldn't get too many units in the same place--fighting them a few at a time is a lot easier. 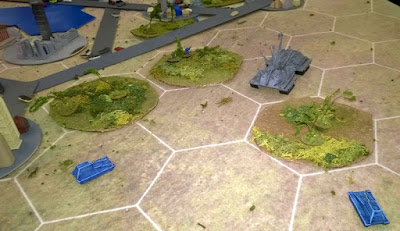 Still, prying infantry out of a city is a rhymes-with-witch, and they were able to keep picking at the Ogre, slowing me down. 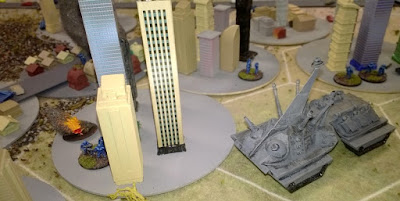 The defending armor units contributed to my misery, but by aiming at treads, they left me free to strike back. I conserved my missiles, using two of them to take out a howitzer and another long-distance shot (the remainder I needed for victory conditions). 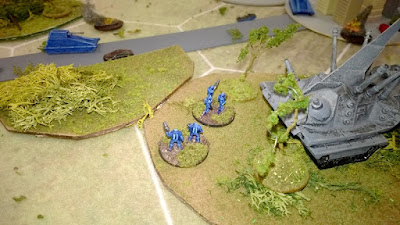 In the end, the cybertank limped off the far edge of the map with two treat units remaining and the rest of the defenders in hot pursuit. It was a narrow victory, and seemed like a balanced scenario. 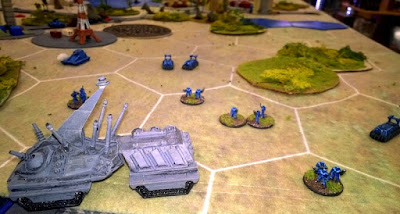 Speaking of Ogre, there's a crowdfunding campaign to get the two largest cybertanks, the Mark VI and the Doppelsoldner, in plastic miniature form. It ends in a few days, so go on over and take a look if you're interested in more Ogre minis.
Posted by Desert Scribe at 11:45 PM No comments: 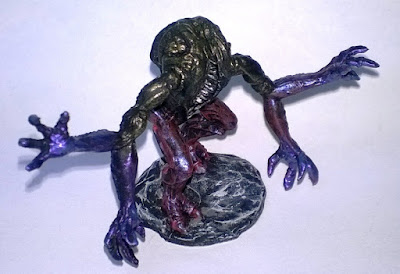 I can't remember the name of this critter, but it's a Reaper Bones miniature. 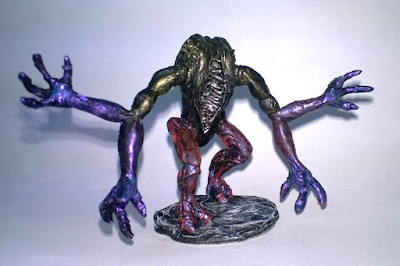 Ugly as all git-out, but fun for me to paint, using those color-shifting paints I got at Michael's craft store. 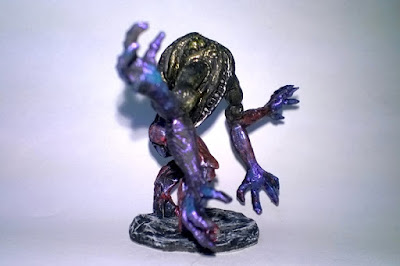 We have Lovecraftian organic alien-ness combined with Geigeresque biomechanical aesthetics. Works for me! 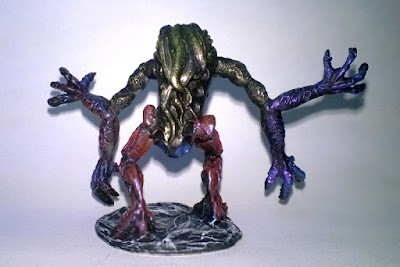 This is another creature to play the role of summoned demon in our Frostgrave campaign. Anyone know what this critter's called?

UPDATE: My thanks to joe5mc for IDing this mini as "gug, eldritch horror." I'm flattered that the author of Frostgrave stopped by the Dreadnought.
Posted by Desert Scribe at 11:41 PM 2 comments:

Sympathy for this devil 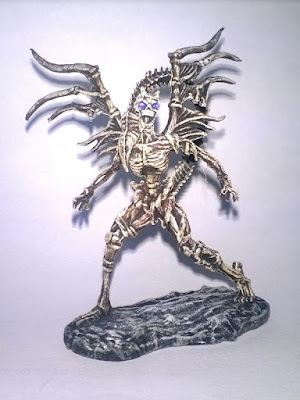 Another Wiz Kids mini, this time a Bone Devil from the Pathfinder line. He will come in handy in future Frostgrave scenarios from the Forgotten Pacts supplement. 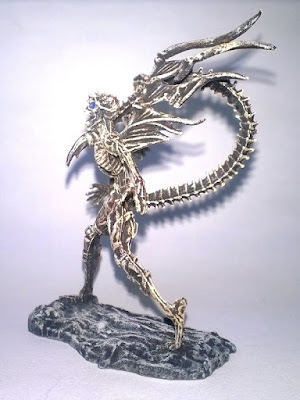 A simple paint job: basecoat black, drybrush lighter shades of brown all the way to linen then vintage white. I then filled the eye sockets with color-shifting blue paint. The base is drybrushed gray, then white. 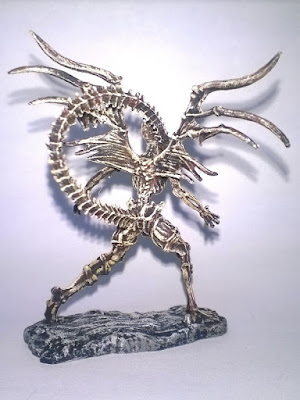 It's not gonna win any awards, but it looks decent enough on the tabletop--and it's the first non-terrain piece I've painted in quite some time, so I'm glad to get this done.
Posted by Desert Scribe at 11:37 PM 2 comments: 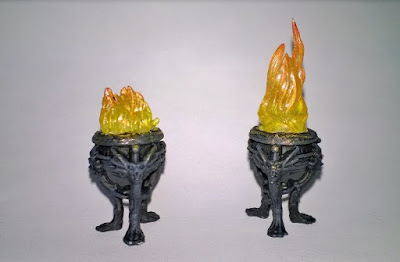 I picked up these braziers from the Deep Cuts line by Wiz Kids, and they were very easy to paint: I first coated each cauldron in black, then drybrushed a dark gray, then drybrushed a lighter gray. The flames, which are cast in translucent material, received a coat of color-shifting yellow blended into some color-shifting red to make color-shifting orange. This was a nice result for very little effort that will provide some more scenery for the next Frostgrave game.
Posted by Desert Scribe at 11:22 PM 2 comments: 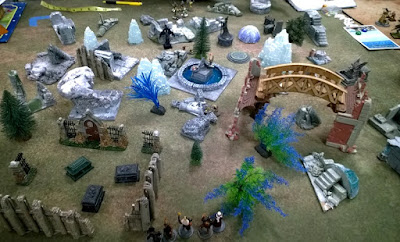 Our gaming group made the return to the Frozen City, starting a new campaign for Frostgrave. Based on the rules update in Maze of Malchor, we all statted out some 10th-level wizards and warbands. We're playing through the scenarios in Forgotten Pacts, with lots of demons. 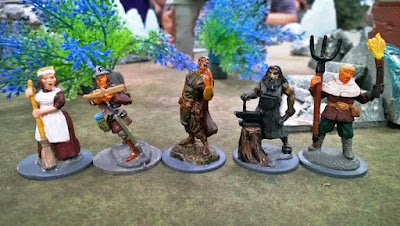 The first scenario in this book is a two-parter, with players using half their warband for each section. I took my inkeeper wizard, along with her fellow townsfolk: a marksman, a mystic warrior, a barbarian, and a treasure hunter. 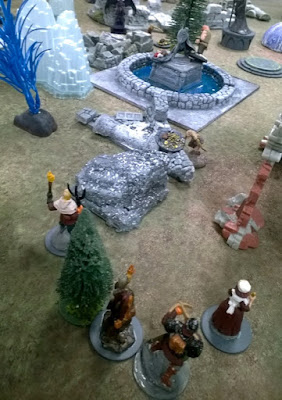 My opponent, John, had deployed his dwarven warband, led by their apprentice. I was easily able to secure the main treasure and one of the other two piles of loot. My guys kept pretty much to themselves as they scurried out of the ruins with their treasures, easily dispatching the demonic Failing Wretches that guarded this area. 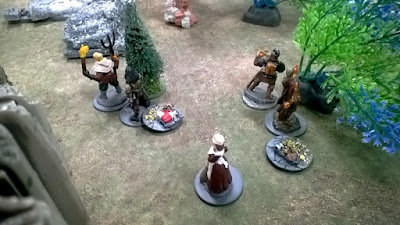 The next part of this scenario was a little more difficult, however--but that's a tale for another time.
Posted by Desert Scribe at 11:20 PM No comments: