Ten years and a thousand posts 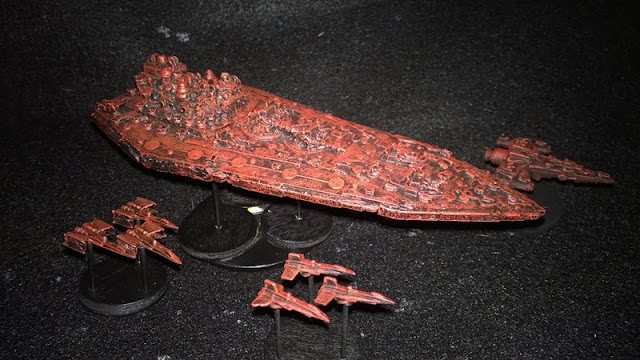 Ten years ago today, Super Galactic Dreadnought saw its very first blog post, a nostalgia trip back to my youth and the influences that would shape my gaming. As you can tell from the name of this blog, I was enamored of the Starfleet Wars line of miniature spaceships that I saw in a magazine ad way back when. 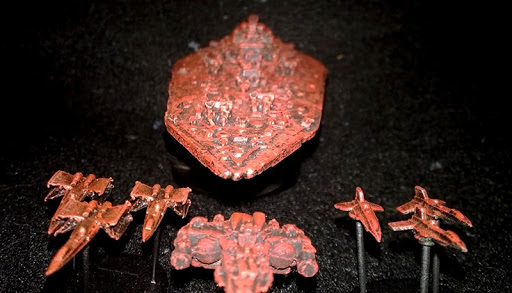 When I started this blog, I was a couple of years into my personal gaming renaissance--a return to regular miniatures and roleplaying after a decades-long drought caused by work, various moves, personal issues, and then law school. Those were great times, as I started playing D&D in a local campaign, met regularly at the local game store for some wargaming, and was in the middle of amassing my collection of spaceship minis. 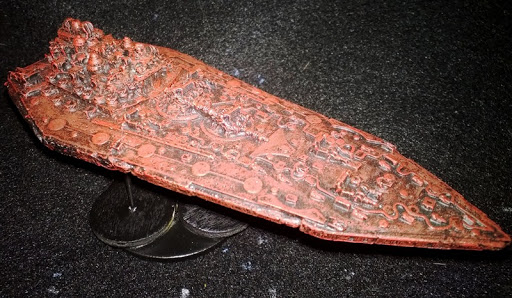 This was reflected in my blogging--I had posts about games, posts about miniatures, posts about sci fi and fantasy. The output was pretty steady the first couple of years, with 200+ posts when I was in the zone. My posting frequency eventually dropped off, however, to just a few dozen a year for the past few years. That infrequency isn't for a lack of gaming, though--up until the pandemic, I was gaming weekly with a group of local players and running games at MillenniumCon on a regular basis. A lot changed over the years, with moves and job switching, but I think the main thing was that playing so often filled the void that blogging previously had done. 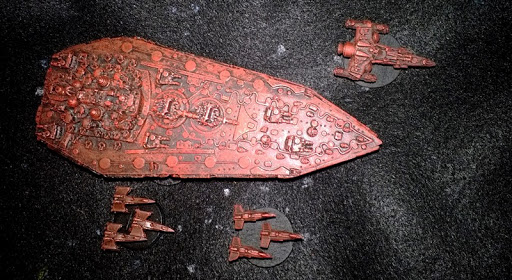 The year 2010 was a much different time, and back then I couldn't have imagined the current events we're living through in 2020. Now, with COVID-19 closing game stores and cancelling conventions, I'm reflecting on my blogging. The numbers worked out nice, and I was able to make sure that my 1,000th post occurred on the 10-year anniversary of starting Super Galactic Dreadnought. I have more than 220 followers, and this blog has over 2,500 comments (not counting spam). I want to thank all of y'all for reading and commenting. I'm thrilled that I can provide inspiration to other gamers, just as so many have inspired me. Here's to more blogging and more gaming in the years ahead!
Posted by Desert Scribe at 11:30 PM 9 comments:

Ace space base Mace in place 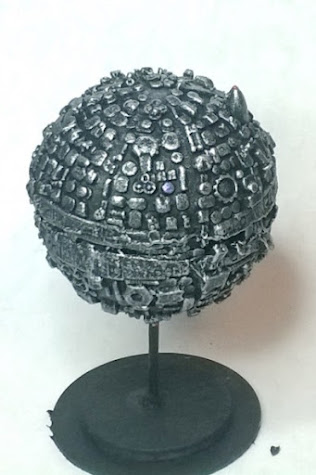 I finally painted this Mace-class space station that I purchased some time ago. It had been sitting on the work table for awhile, so it was nice to get something done. 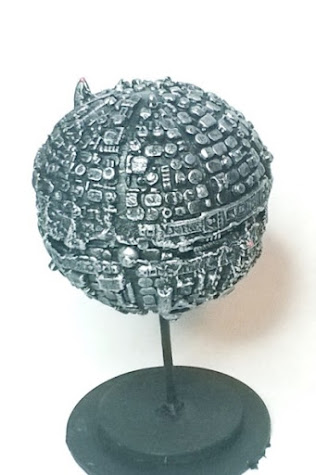 This Terran base is from Monday Knight Productions' Galactic Knights range (originally the Starfleet Wars line from Superior Models). It was a simple paint job: Spray black, drybrush in metallic black, metallic gunmetal gray, and metallic silver. If you look close, you can spot a dab or two of color here and there. 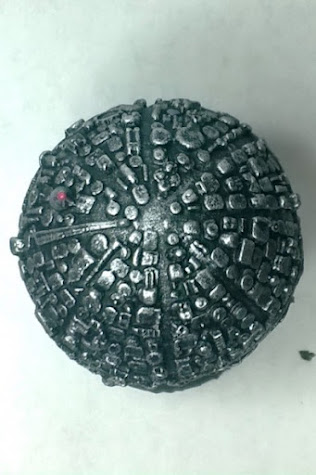 You can never have too many space miniatures, right? 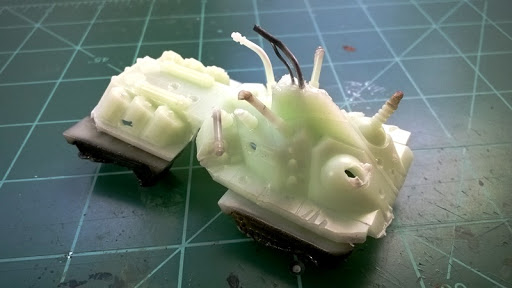 I decided to try my hand at modding an Ogre into a hulk, for use as an objective or eye candy. I had some fun drilling, cutting, and melting a plastic Mark V to give it some battle damage. I know, it's sacrilege to do that to one of the glow-in-the-dark minis, but it was all I had. 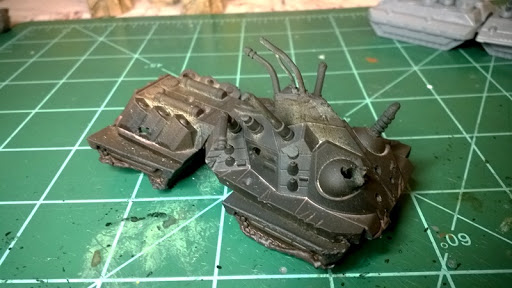 Once I had that destructive work done, I sprayed it in a tan color, then dusted it over with flat black to give it that burned out look. It still needs some work--a wash maybe, and then picking out some of the impact points in a metallic color--and possibly adding some steel wool for smoke, and then I'm done. 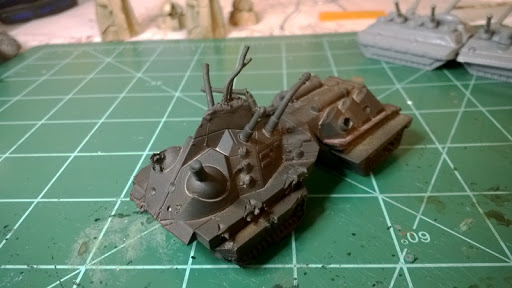 I would never do this to one of my metal minis, but since I have an abundance of these plastic models, I didn't mind sacrificing one for the cause of gaming. Anyone else have second thoughts about cutting up their miniatures, or is it just me?
Posted by Desert Scribe at 11:52 PM 3 comments: 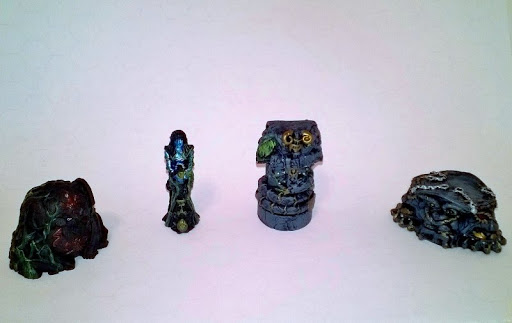 I picked up Artifacts Set 2 for Mage Knight Dungeons on the secondary market, and I really like the look of these prepainted pieces. I plan on using them for terrain and/or objectives for Melee/Wizard, Frostgrave, Ghost Archipelago, and similar games. 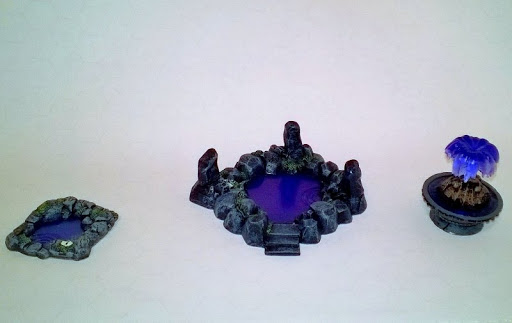 You can never have too much scatter terrain in your skirmish games, and this set even came with some rules for special game effects that I will try to port over to my own scenarios. 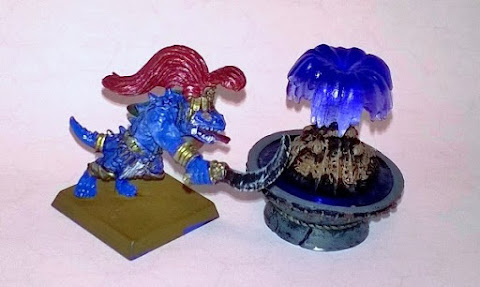 As you can see from my Warhammer Saurus hero (used as a Heritor for Ghost Archipelago), these castings are the right scale and style for dungeon crawls. I hope to see them in action soon.

The 433rd Lift Wing was one of the first North American Combine military units to purchase its own intellectual property and strike out as an independent mercenary organization during the Factory States Era. Focusing on mobility and logistics, the 433rd consists of the Lift Group and the Heavy Lift Group. 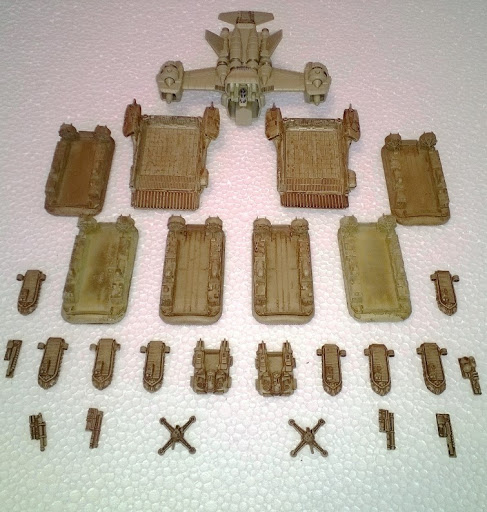 Heavy Lift Group has one independent flight (the Sea Monster-class ekranoplan) and two squadrons: the 136th (a single flight of two Kraken-class Ogre transport hovercraft) and the 712th (two flights of three Sea Steed-class LCACs). Lift Group has three squadrons: the 21st (two El-Dingar-class heavy GEV-PCs, the 56th (four Clydesdale-class hover transports), and the 78th (ditto). Although not a combat unit, the 433rd does have a single battery (two Centaur light artillery drones) for defending beachheads. 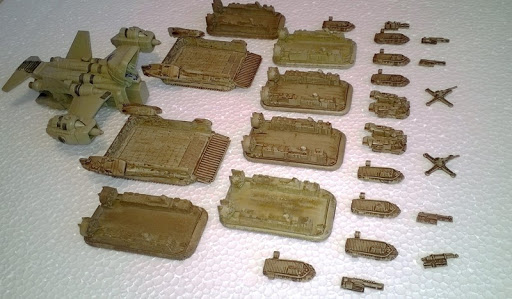 I hope to see this unit in action for an aquatic assault scenario (Monopolis-by-the-Sea!) eventually. Meanwhile, I hope everyone is still doing something game related.