I'm woefully behind on blogging about our weekly games of Frostgrave, so here's a photo dump in order to catch up. First, three weeks ago, we played a straightforward battle, since we're doing scenarios from Thaw of the Lich Lord on alternating Thursdays, and this was an off week. 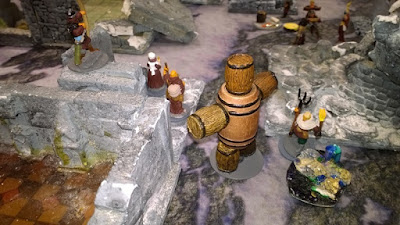 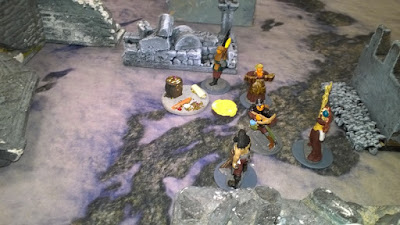 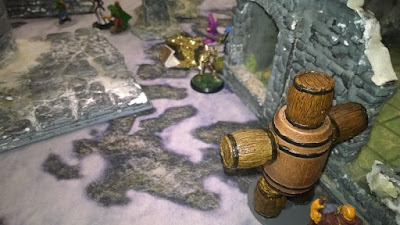 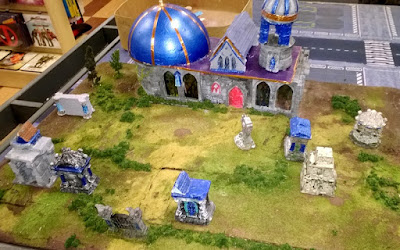 Yosef, one of the players in our Frostgrave group, enjoys making terrain. In addition to creating most of the scenery for our FG scenarios, he puts together boards for other games, like this vampire's lair for another gamer. 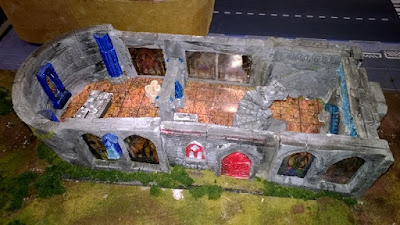 The roof comes off to reveal a detailed interior. I especially like the stained-glass windows made with artwork printed onto transparency sheets. It's a cool piece. We're lucky to have him apply his talents to our gaming table.
Posted by Desert Scribe at 9:30 AM 1 comment: 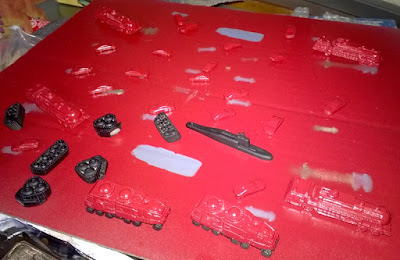 Here's another project I'm working on: Emergency response vehicles in 6mm scale. The models are Ral Partha MASH units and RP's successor Iron Wind Metals coolant trucks. The medical vehicles make nice large ambulances, and the coolant transports are ideal firefighting vehicles. I'm planning on adding these to my next Monopolis scenario for Ogre, although I'm not sure exactly how.

As you can tell, I also have some more 1:300 automobiles for scatter terrain that finally received pigmentation, and an additional submarine for nautical Ogre scenarios. You can also see part of yet another special unit for Monopolis, but I think I'll hold off talking about it for now.
Posted by Desert Scribe at 4:30 PM No comments: 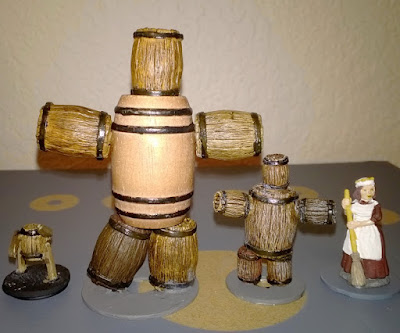 One thing I like about Frostgrave is that the game encourages you to use your imagination when selecting figures for the game. To that end, I kitbashed some constructs for my enchanter to take into battle. Since my wizard is a former tavern owner who lost her business due to the economy, I figured her magically animated creations should reflect her background. 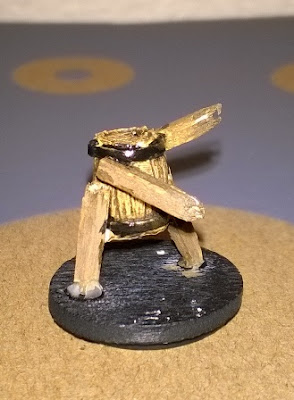 The small construct, Beryl, came from a Reaper Bones set of barrels and some wooden matchsticks. 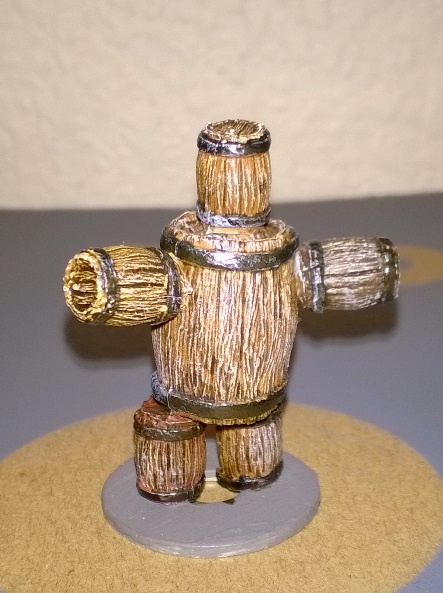 The components for Porter, the medium construct, also came from the Bones castings 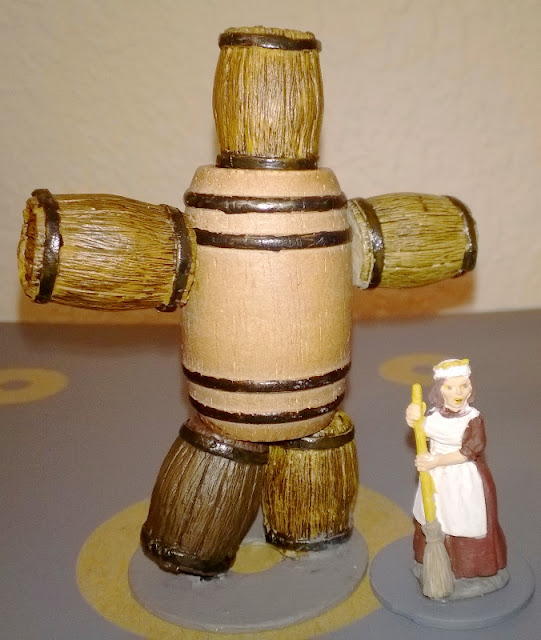 Stout, the large construct, took a little more searching for building materials. In addition to the Bones barrels, the large container came from the miniature dollhouse accessories shelf at Michael's craft store. Here he is next to his creator, the enchanter Spica "Spike" Brewer.

In addition, I finally got around to painting these treasure tokens, suitable for use with Frostgrave or Kings of War. Anyone else kitbashed anything recently?
Posted by Desert Scribe at 10:08 PM 5 comments:

Last month I had a day off and got together with some of the Frostgrave gang to play some Ogre before we resumed our FG campaign. One player was relatively new to the game and the other remembered it from three decades ago, so I gave them each an Ogre Mark III and I played the defense, with the forces listed in the errata for that scenario. 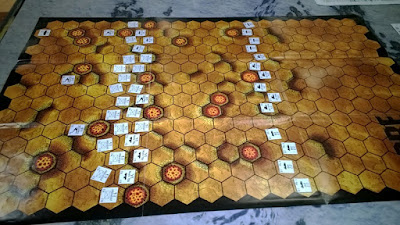 I placed my GEVs and heavies up front, and the enemy Ogres made short work of them--but not before some lucky shots took out a main battery on one of them. A few hovercraft remained to harass the cybertanks, but the heavy work fell on the infantry and missile tanks that made up the second wave. 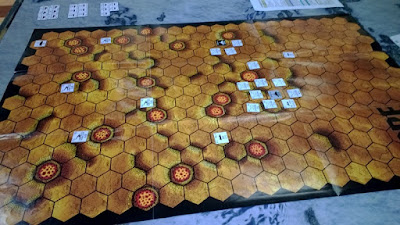 By this time, the Ogres rolled under my howitzer umbrella, and some more good shots stripped away their remaining treads while they were far away from the command post. 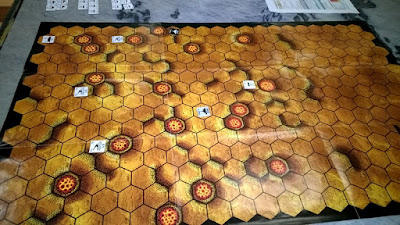 It's nice knowing I can beat two Ogres at once, thanks to the extra forces provided in the errata, but it was a costly victory. The only mobile unit I had remaining was a single GEV. I also had three howitzers and, of course, the command post. Still, you can see that I suffered a lot of casualties. 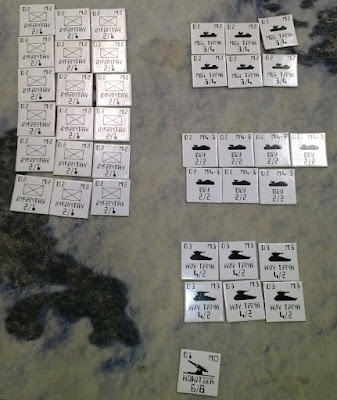 Next time I bring this game, I want to play the Ogre.
Posted by Desert Scribe at 8:51 PM 2 comments:

It's taken me awhile to get around to posting them, but behold some photos from previous games of Frostgrave. I've been fortunate enough to find a group and play on a regular basis for several months now. 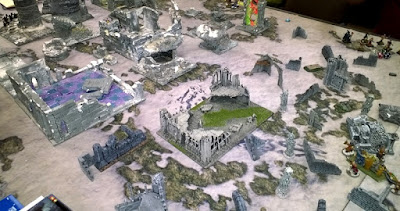 The battle against the snowman was part of a playtest back in early December for Jon's scenario, Santa's Slay Ride. I was using borrowed figures at the time. 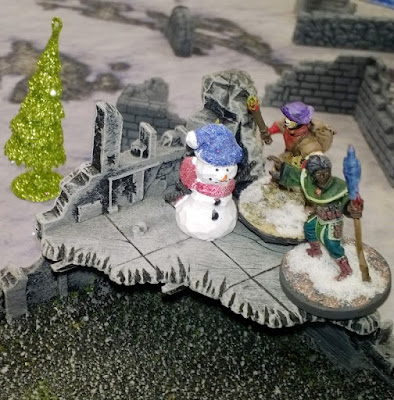 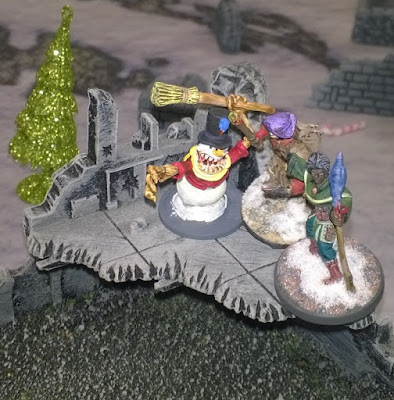 Two weeks after the Eclipse scenario, we played the next part of the Lich Lord campaign, which involved a frozen river. Here you can see my warband, split into two groups, about to walk out onto the icy waterway. 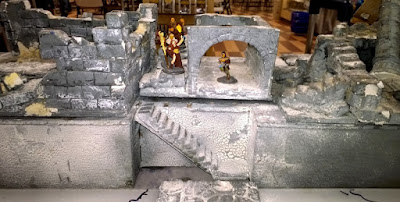 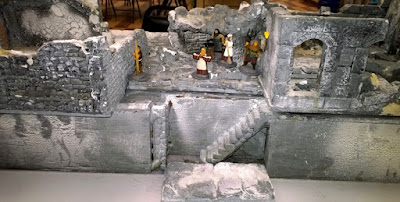 Yosef did a fantastic job making the terrain for this game, with looming riverbanks, ice floes, and lots of derelict watercraft. 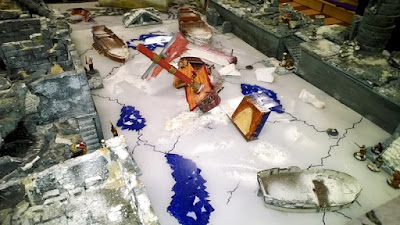 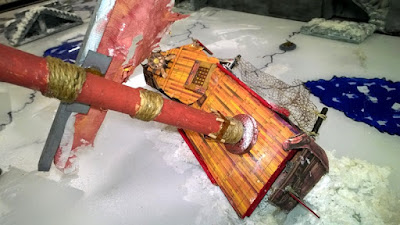 Finally, last week's campaign game involved fighting the Lich Lord's cultists, who were guarding a treasure-filled wagon. Some ghouls also showed up, but a couple of Wall spells kept them at bay. 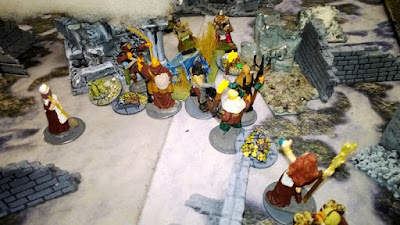 Surprise gift for myself 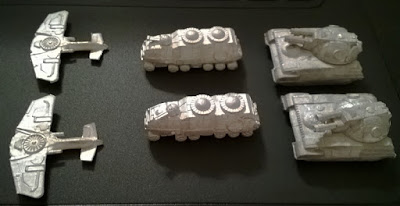 Isn't it great when you stumble across some miniatures that you had totally forgotten about? While browsing eBay, I remembered that I had some 6mm scale sci fi vehicles that would go great with OGRE/GEV.

These are a couple of unmanned aerial vehicle from Reaper's CAV line of minis, a pair of Ral Partha Battletech MASH units, and two RP Demolisher tanks, also for Battletech.

Although aircraft aren't a normal part of the OGRE battlefield, I have an idea how to use the UAVs in my next Monopolis scenario. And I'm already using Demolishers as superheavy tanks for my North American Combine force, since I think their rounded turrets go well with the other NAC tank minis (and they look a whole lot better than the Steve Jackson Games superheavies). Not sure what role the MASH units will fill, but I know I will get them on the table after having them boxed up all this time.

Anyone else ever rediscover minis that you'd forgot you had? It's like I'm getting them for a second time.
Posted by Desert Scribe at 9:23 PM 2 comments: