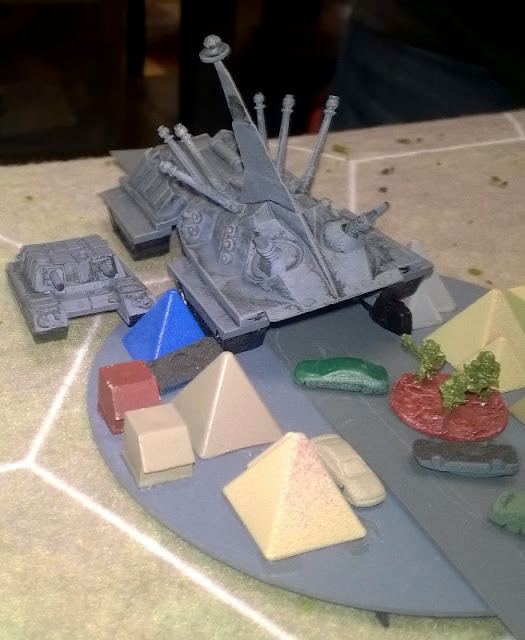 Last week saw the first of what I hope will be a monthly quasi-narrative Ogre campaign. We had six players, including me--and a couple were new to Ogre. The scenario was a holding action by the Monopolis city militia some 100 kilometers from the city. The defenders needed to hold out as long as possible to keep the attacking gray force from driving up the road to Monopolis. 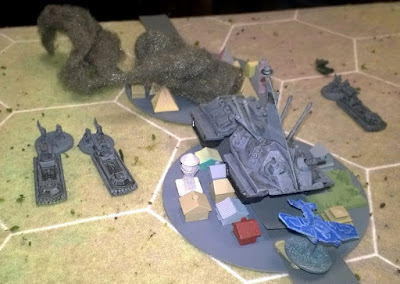 Combat was quickly joined, and devastating to the combatants and the countryside. I had set up a few town hexes. The players quickly learned that city fighting can be brutal. They also learned that overruns in Ogre are even more deadly. 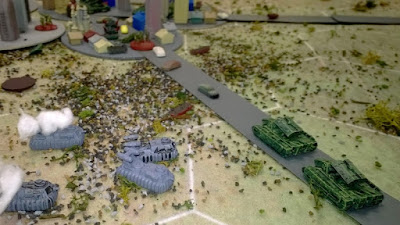 The fighting in this small town grew intense, as the defenders fell back before the advancing Mark V Ogre. Meanwhile, conventional units were racking up their own casualty counts. 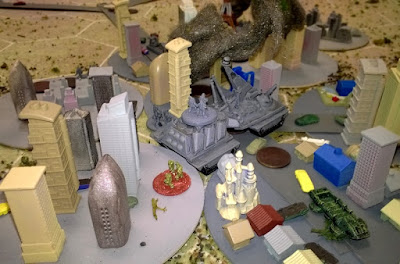 The defender's Mark III wasn't able to do much damage to its larger cousin, but it gave a good staredown from one hex over. 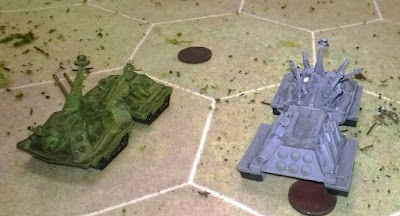 In the end, the attackers pushed out the defenders and left the small town in flames. The players remarked on how lethal the game is for armor units. The round counters indicate where tanks and GEVs were destroyed. The playing mat was littered with these tokens at the end of the game, but everyone had a good time. 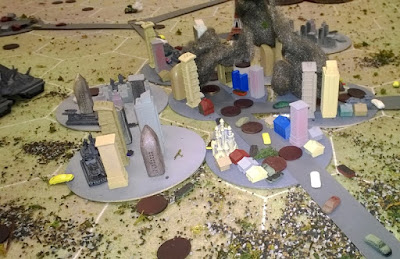 I plan on running another scenario as a sort of sequel to this one next month. I look forward to playing again, with new and old players.
Posted by Desert Scribe at 11:13 PM 4 comments:

Bungle in the Jungle 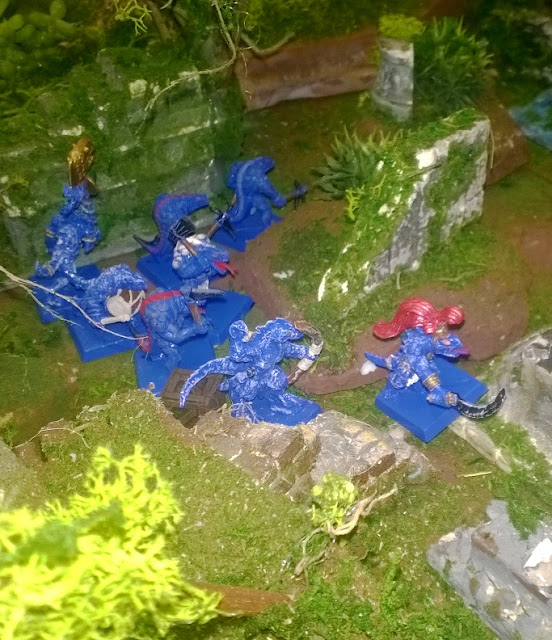 We played our first game of Ghost Archipelago last week, and we all had fun. The game is pretty much Frostgrave on a tropical island, so it was easy for us to get into the swing of things. But before we began the scenario (just a basic game to familiarize ourselves with the rules), we played out a little minigame using the old Pirates of the Spanish Main ships and a Dreadfleet map. 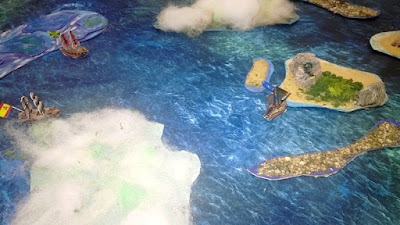 There were four of us sailing against one another. Loosely adopting the PotSM sailing rules, combined with GA-style combat resolution, the objective was to get to the island first in order to select your starting edge on the main board. Also, players whose ships took damage had an initiative penalty during the Ghost Archipelago battle. I made it to the island first, and avoided getting hit, picking the nice beach on left side of this pic. 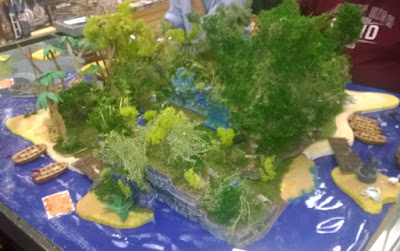 One of our group is the main terrain maker, and he went all-out on this board. It looked great, but the density of the terrain made it hard to move figures without knocking over scenery. Of course we were a little cramped as the playing area was three-by-three with four players; next time we will make it three-by-six for the four of us. 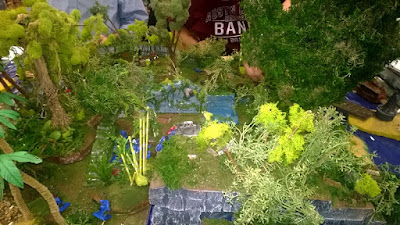 Because I always have to be different, my warband consists of fifth edition Warhammer Lizardmen figures supplemented by some Reaper minis. They had a good showing; my wave warden was able to cast five spells, even though my heritor could not make his activation rolls for his special powers. The crewmembers did well also, defeating members of opposing crews and even some undead. 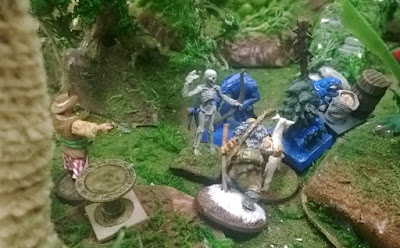 Unfortunately, my miniatures were not complete in time for game night, so I had to send them into the field with their bases unadorned. I also need to add a few details to the figures. Still, that didn't affect their performance on the tabletop, as my reptilian adventurers picked up one central treasure and three regular treasures. 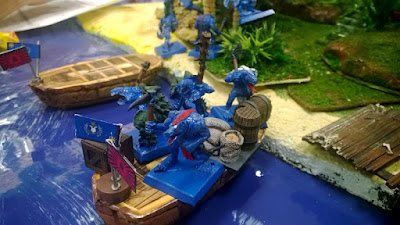 They were able to get all their loot back on the boats and leave the island almost intact. They lost but one standard crewman to combat. Unfortunately, this blue-striped saurus failed his survival roll and will not be returning until I cycle through all the other generic crew (I painted up eight total, each with a different color stripe down its back). 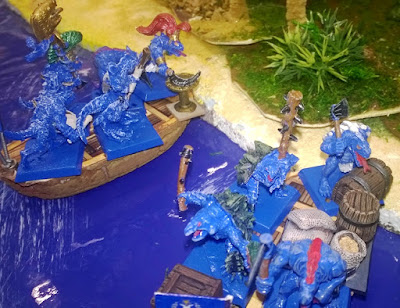 So Ghost Archipelago is a fun game, and I'm looking forward to playing out this campaign. I'm also enjoying our nautical prelude we play out, which only takes a few minutes and provides some additional story to our skirmishes. Who else is playing GA? What do you think so far?
Posted by Desert Scribe at 9:14 PM 5 comments: