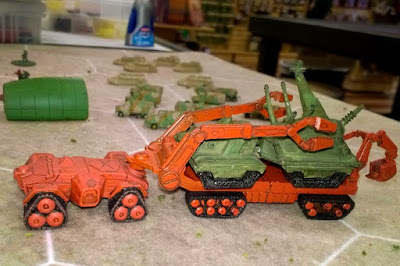 This bad boy appeared on my gaming table last week. It's a Battletech mini (the O-66 "Oppie" Hazardous Material Recovery Vehicle), but it also makes a great tow truck for my games of Ogre. 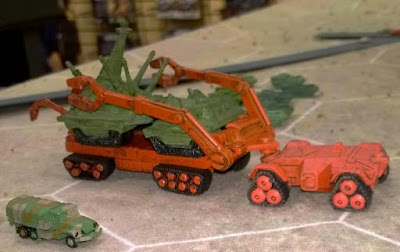 As the photos show, this vehicle can fit an Ogre Mark III on its flatbed, or several smaller vehicles. In games, I give it the tread units of a Mark III, and two antipersonnel weapons for a little bit of protection. 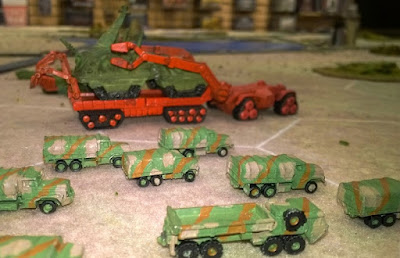 It can also carry cargo pallets (my Ogreverse backronym for the Oppie is that it stands for Oversized Pallet Parcel Engineering vehicle), which it did in my most recent Ogre game. While I'm not a fan of most Battletech vehicles, there are a few that work great for other sci fi games. Any other BT non-mech casting that y'all can recommend?
Posted by Desert Scribe at 12:04 AM 4 comments: 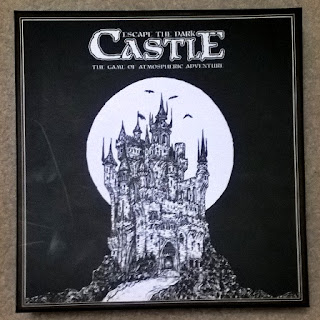 We took a break from miniatures this week to play Escape the Dark Castle. It's an RPG-lite, beer-and-pretzels, semi-chose-your-own-adventure, cooperative, quick-playing, retro-looking, card-based game. It's also very fun. You are imprisoned along with your fellow players when you free yourself from your dungeon cell. You have a card depicting your character, with a corresponding die. 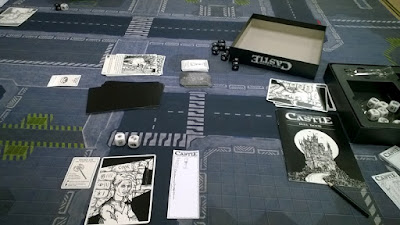 You and your fellow players work together to overcome one card-based obstacle at a time, trying to accomplish what it says on the box: escape the dark castle. There are foes to battle, choices to be made, items to grab--all in your quest to defeat the final boss standing between you and your freedom. We played three games, and even though we only reached the boss one time (where we died in combat), we enjoyed each attempt.
Posted by Desert Scribe at 10:44 PM No comments:

A familiar face in the Ghost Archipelago 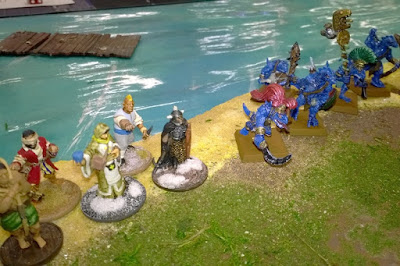 Another custom scenario last week. In this one-shot (non-campaign) game, we each received a Heritor with random abilities, a Warden, and three specialist crewmembers, each with a single Heritor ability. The backstory: We'd all heard rumors of a newcomer to the isles, someone from a frozen city far to the north. If this individual found the Crystal Pool, then Bad Things would happen. So we banded together to seek this person out. 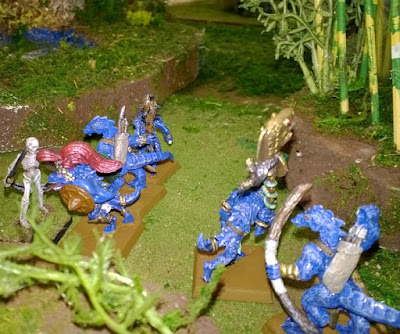 He was known as the Lich Lord. And he brought his undead friends with him to the island. Maybe it was the fact that my lizardmen had more detailing, but they were easily able to defeat the skeletons that came at us. 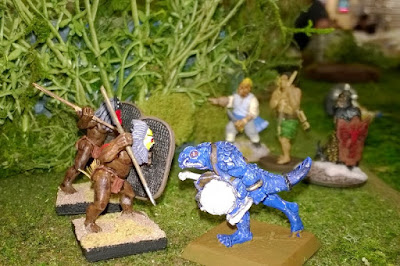 The Lich Lord had found some local allies, tribesmen led by a witch doctor out for power. But some archery took out the spell caster before he could do too much, and I brought my tomb robber in to take out the warriors, with some backup from another warband. 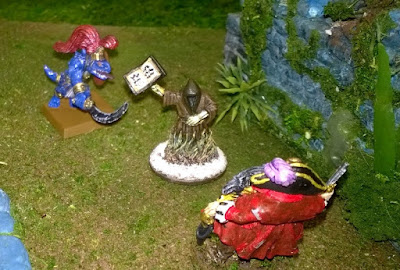 The allied Heritors and their assistants put an end to the Lich Lord's exploration of the Ghost Archipelago. Here's hoping he stays up north.
Posted by Desert Scribe at 8:15 PM 1 comment:

Hunting dinos in the Ghost Archipelago 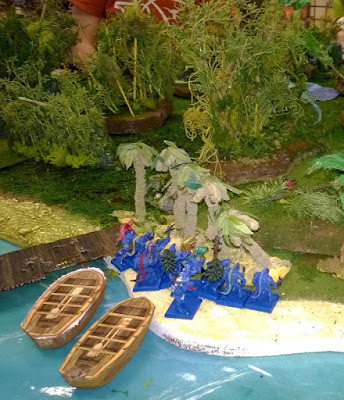 One of our group wrote a scenario and we played it a few weeks back. each group landed on a separate corner of the island where a large dinosaur roamed. I took my lizardman warband, still with unfinished bases. This adventure was similar to one of the scenarios in the rulebook, but the main critter was a lot tougher. 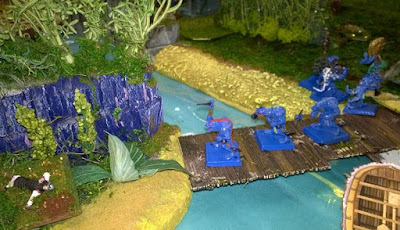 Dead bodies marked the treasures in this game, luring each warband in to grab the valuables. The catch: Baby dinos were chowing down on the corpses, and a search would bring the critters out of the bushes.

Meanwhile, Momasaurus was roaming around and spotted another warband. She was mad, bad, and dangerous to know--with a +8 Fight and having a second attack in the form of a tail sweep. 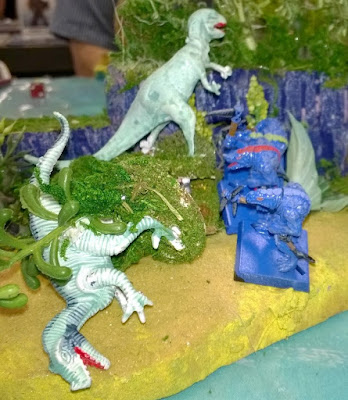 The baby dinosaurs were a lot easier to overcome, although when they popped out two or three at a time, it made things a little worrisome for my warband. Still, my reptilian warriors had no qualms about fighting their distant cousins. 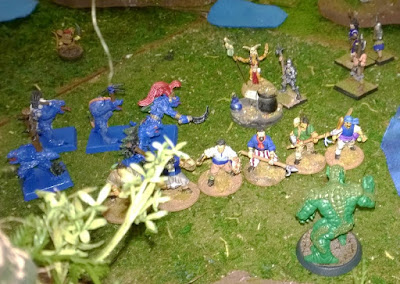 Some other monsters showed up on a random encounter roll, including this swamp troll. I teamed up with another player to defeat this creature, but the same player later took out my Heritor and two other crewmembers because he thought I was getting away with too much treasure. 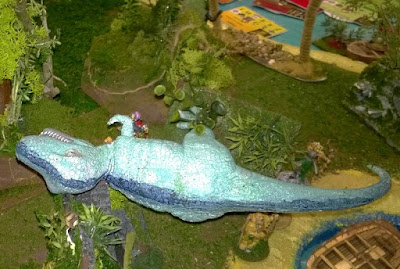 On the other side of the island, the warband belonging to the scenario's author finally took down Momzilla, after losing several members of his warband. The slain beast yielded a treasure or two, hopefully making it worth his while. A fun game, even though my Heritor received a permanent injury. Them's the breaks.
Posted by Desert Scribe at 10:48 PM 1 comment: