Today's an appropriate day to share pictures of my spider army for Hordes of the Things (and to get my post count up to 3 for the month of October).  Although this army doesn't play particularly well, I like to take it out for a spin every once in awhile.

The figures are a combination of toy spiders and plastic spider-shaped jewelry sold as party favors.  I picked them up last year on sale the day after Halloween.  The bases are cut from cardboard and painted and flocked normally.  These minis can freak out arachnaphobes--I even had one player who saw this army and said he would never play against it because he can't stand spiders! 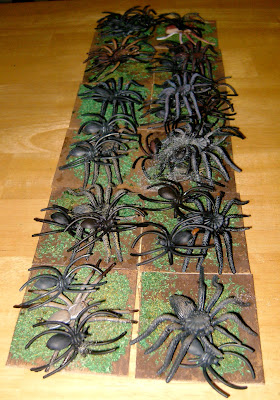 The main component of this army is 12 elements of Hordes on 60mm x 60mm bases. 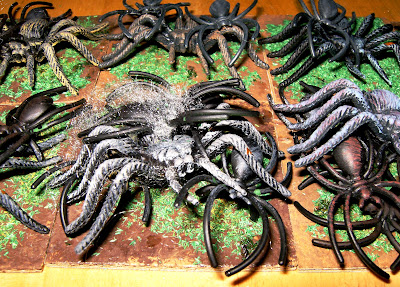 The big spiders were various colors of plastic; I drybrushed them to bring out the details.  The smaller spiders came in black or bright green plastic; I spray-painted them black and then drybrushed in idfferent hues. 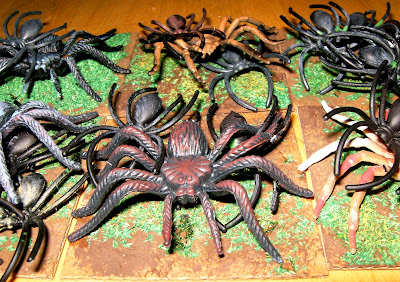 I also used three of the big spiders as Sneakers elements.  They're on 60mm x 40mm bases.  These guys always underperform and usually just die too easily, counting 9 AP against my army total--and unlike Hordes or Lurkers, I can't bring these fellas back. 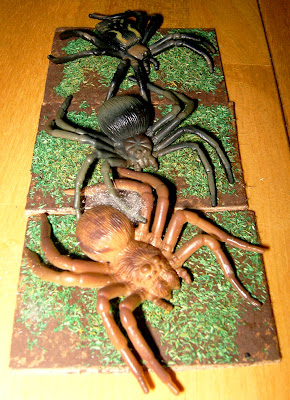 In addition, I placed three of the small spiders on 60x40 bases to serve as Lurkers elements.  I always seem to get great mileage out of this element type.  These particular critters, acting in combo, actually brought down a Behemoth in one game. 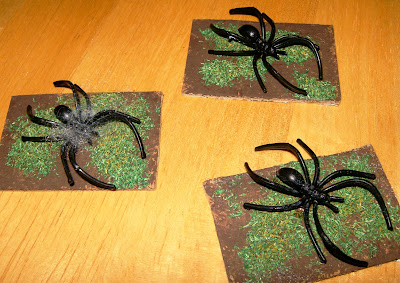 I also have a Stronghold, which consists of a plastic tree and the top of the container for the big spiders.  It's encased in webs and swarming with the smaller arachnids. 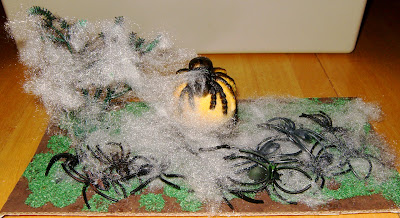 Like I said, this army disappoints on the battlefield.  With 12 Hordes, 3 Lurkers, and 3 Sneakers, it's not particularly combat effective--and once the Sneakers all die, it's a quick three points to losing half the army.  Still, it makes for a challenging game. 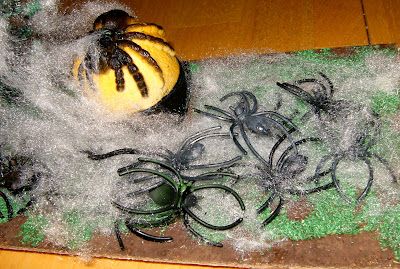 Email ThisBlogThis!Share to TwitterShare to FacebookShare to Pinterest
Labels: galleries, Hordes of the Things

Missing out on MillCon

Well, I'm not gonna make Millennium Con this year.  I ran a Galactic Knights game at last year's con, and I had intentions of running one this November--a pretty good eight-player free-for-all--but time just got away from me.  I got the reminder emails and kept telling myself I needed to register my game, but I never did.

I've been training for a marathon, and in addition to being physically tired (believe it or not, a marathon involves a lot of running!) I've been mentally drained as well.  So tired that in the evenings, I haven't been able to summon the mental energy to blog.  That's kind of evident from the lack of posts this month.

So anyway, thanks to my procrastination and outside life, I wasn't able to get together a scenario for the convention.  Not only that, but because of the marathon (which is the Sunday of MillCon) and the fact that I'll be out of town the weekend before the con, I decided that I just have waaaay too much stuff going on.  Therefore, I'm not even going to attend the con as a player.  That's right, no gaming at all for me at MillCon.

I hate to miss out on such a great gaming opportunity, but I have to prioritize.  Once the race is over, I hope to get some more spaceship gaming in (and some more blogging!).  Meanwhile, if you do attend Millennium Con, have a good time.
Posted by Desert Scribe at 10:33 PM 3 comments:

Email ThisBlogThis!Share to TwitterShare to FacebookShare to Pinterest
Labels: conventions

After a two-week silence, I at least have something to share with y'all: Some more completed Star Frontiers Knight Hawks ships. 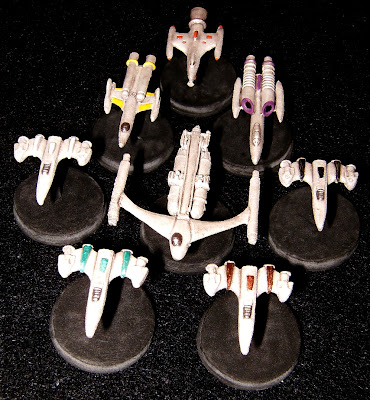 These are all from my last Half-Price Books score, and include some pretty rare privateer spaceships from a boxed set, as well as some scouts and a freighter from a Federation boxed set and a blister pack. 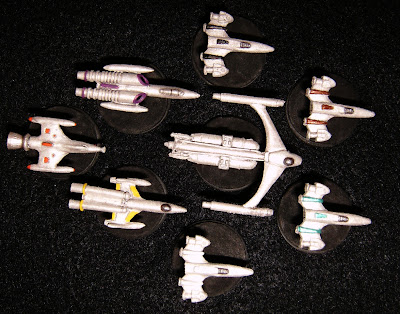 I painted these guys metallic pearl white, which very bright, then toned down the brilliance with a wash of metallic gunmetal gray.  The domes were done in gunmetal gray, and then details picked out in various colors I hadn't used before. 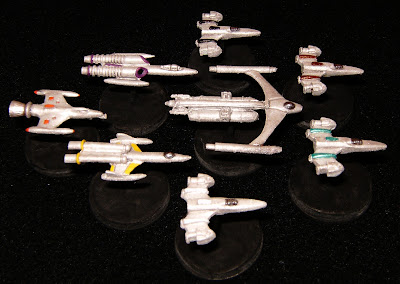 I really like these privateers--they look very sleek, like something out of a 1960s aerospace magazine.  They'll find use in my games as racing vessels or luxury yachts, probably. 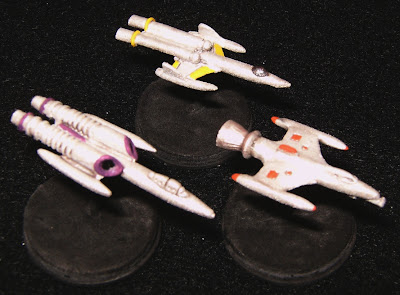 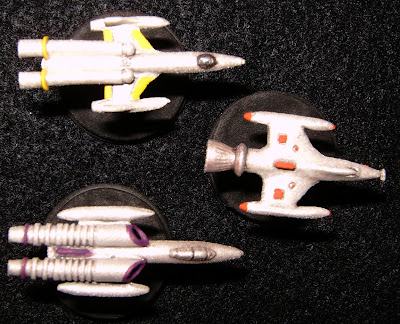 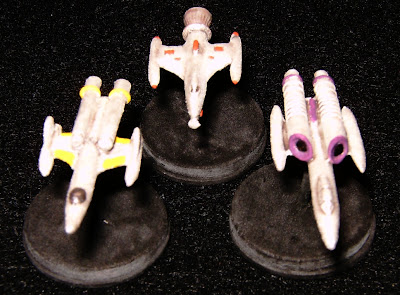 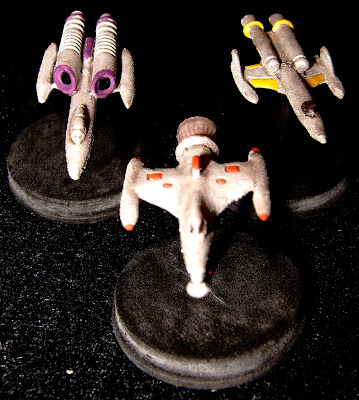 Of course, these scouts and freighter will join the Galactic Knighthawks stunt team, a/k/a the Flying Roadshow.  I tried not to repeat any colors when painted the markings on the scouts.  It's hard to tell from the photos because of the flash, but I didn't forget the markings for the scout at the top; it has silver/white stripes. 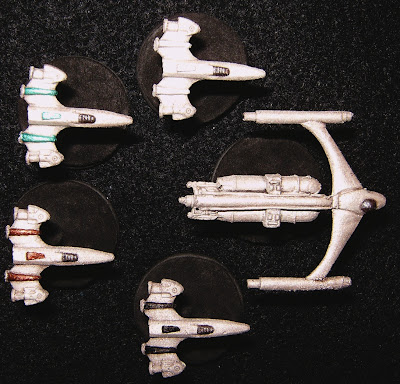 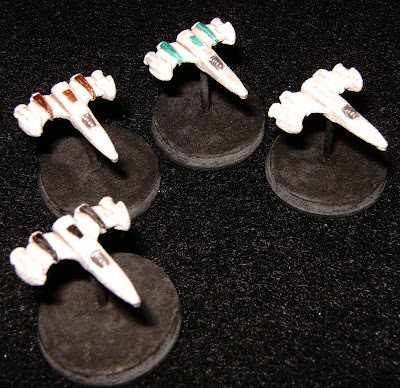 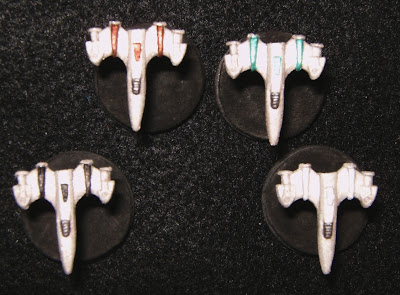 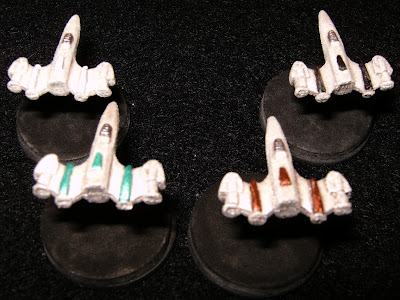 And, of course, I have another freighter.  This is the GKHs' support ship, or possibly a tanker for in-flight refueling.  You can see the details pretty well in these pictures. 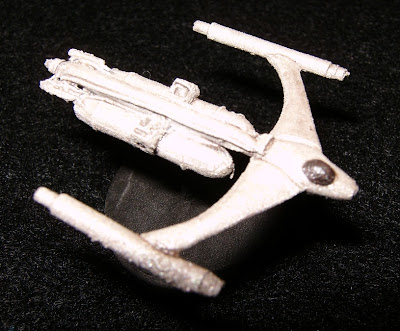 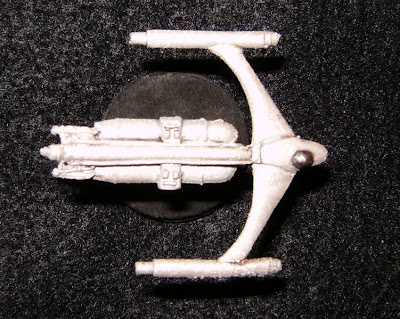 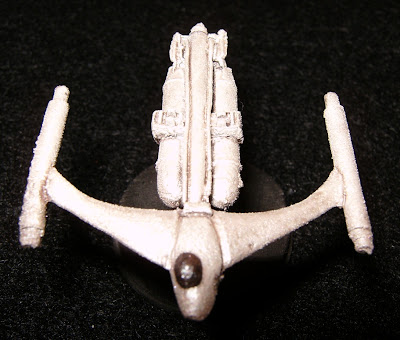 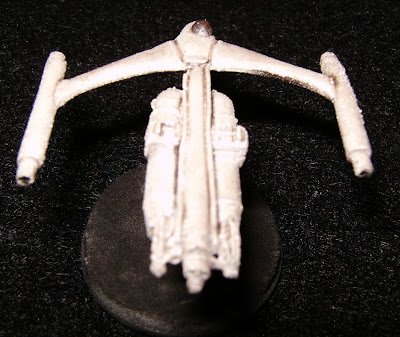 Can't wait to get these on the tabletop, but I need to come up with some rules for them first.  Back to the keyboard!
Posted by Desert Scribe at 10:27 PM 2 comments: