Ed the THW Guy was kind enough to send me a copy of the newest game in his sci-fi universe, 5150: Fleet Commander. This game is at a little higher level of abstraction than the rules that I co-wrote with him, 5150: Star Navy, so I decided to run a largish fleet battle. With just four stats per ship (and only one stat that changes), it was easy to get a number of ships on the board. 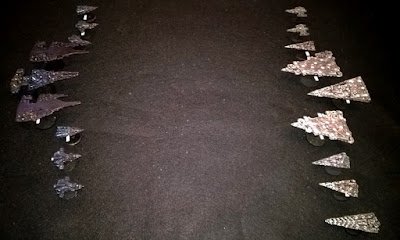 My Star Navy had a capital ship squadron (Dreadnought and two Carriers) and two escort squads (Light Cruiser and two Destroyers, and Destroyer and two Frigates). The Hishen had their own capital squad (Planetary Conquest Ship and a pair of Motherships) and a couple of escort groups (each with a Slaver and two Patrollers). 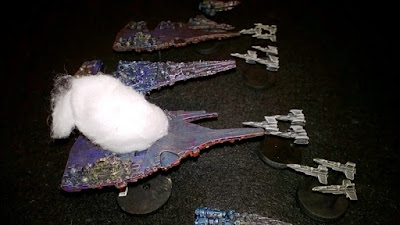 The two sides launched fighters and missiles, and opened fire (all taken care of with one combat roll per ship). The Star Navy damaged one of the carriers on the first volley, but lost one of its frigates as the Hishen retaliated. 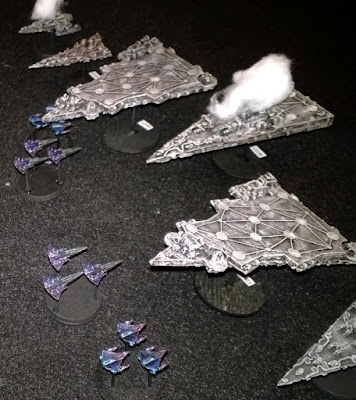 Other human vessels also took damage (meaning they could not return fire during the Hishen turn or initiate fire on their next turn). 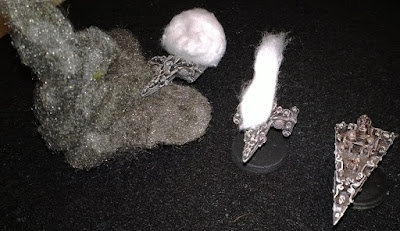 With each vessel targeting its equivalent on the other side, the big ships were not doing much damage to each other. The smaller craft, on the other hand, quickly eliminated one another. Most of the smaller ships, however, made their rolls to remain in the battle, with just one human ship, the light cruiser, fleeing the battle after taking damage. All the rest stayed until they were destroyed. 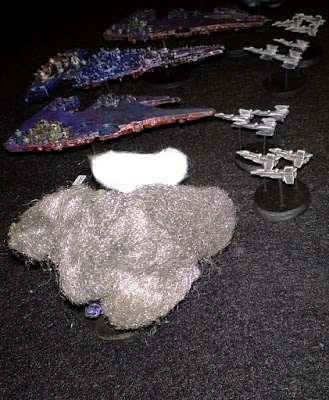 Still, even after losing ships, neither side's commander wanted to leave the battle. C-beams glittered as the two fleets continued to exchange fire, with more escorts evaporating each turn. The large vessels, however, were hard to damage--and they could all take a lot of it. 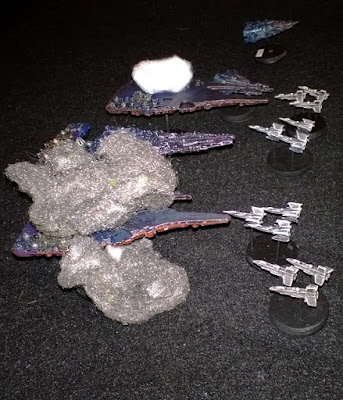 Finally, the Star Navy carrier attacks got through to their opposite numbers. First one Hishen mothership erupted, then the other one turned into a rapidly expanding debris cloud. 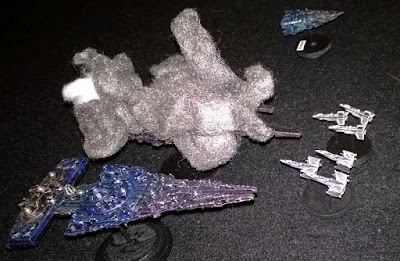 With most of their fleet gone, the Hishen commander still refused to flee, and the Star Navy's ships were able to concentrate most of their firepower on the alien flagship. Only a few shots got through to do damage, but they were enough to send the planetary conquest ship into damage control mode--meaning its crew was too busy to shoot at the Star Navy. 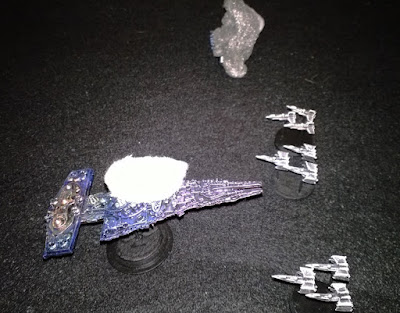 Finally, a couple of shots made it through to demolish the remainder of the defenseless flagship's hull, destroying the final Hishen starship. 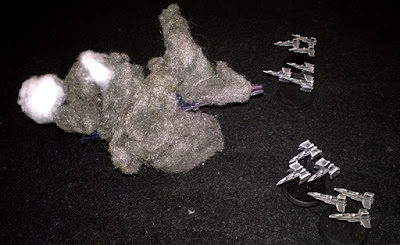 The Hishen fleet was completely wiped out, while the Star Navy lost two destroyers and two frigates (although severely damaged, the light cruiser is now fully repaired and ready for its next fight). It was a fun game, and it took me around an hour-and-a-half to play. Thanks, Ed!
Posted by Desert Scribe at 10:30 PM 3 comments:

I am pleased to announce that my article on Building Your Own Monopolis for Ogrezine II (the online magazine for Ogre) is now up. While the subject will be familiar to most readers of this blog, the article goes into a little more detail, and it pretty much covers everything about my tabletop city. Please go take a look!
Posted by Desert Scribe at 9:21 PM 3 comments:

One more car for Gaslands 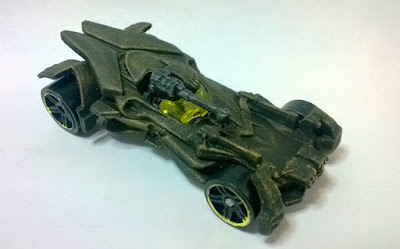 You might have noticed a new vehicle of mine in last week's Gaslands debut: This is a Batmobile from the DC Justice League line, with a pretty minimal repaint. 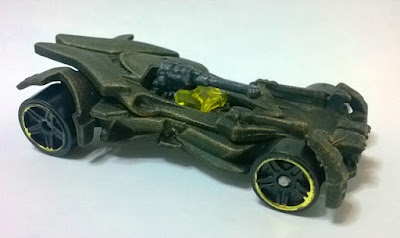 All I did was take the car apart, spray everything but the wheels and windshield flat black, and then do a little drybrush work.

The body of this vehicle was drybrushed in a couple of shades of metallic gold, and I just hit the cannon on top with some metallic gunmetal gray. 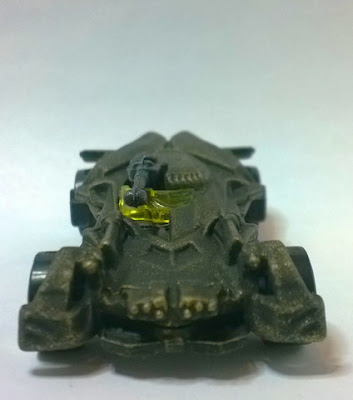 I then glued everything back together, leaving the gun turret free to rotate. I made sure to glue the wheels, so the car won't start rolling off during a game of Gaslands. 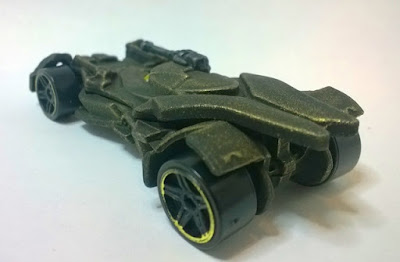 In game terms, I will use this as a performance car, and give it enough equipment to bring it to 50 cans--typically the cost of an entire race team. 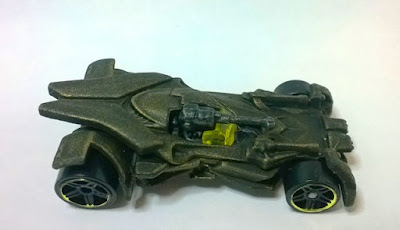 It will be interesting to see how a single expensive vehicle competes against teams of multiple (less costly) vehicles.
Posted by Desert Scribe at 8:43 PM No comments:

Every now and then it's fun (and a lot less hassle) to play some hex-and-counter Ogre. We did that a few weeks ago using my classic counters on old paper maps I have from when I first got some metal minis sets. 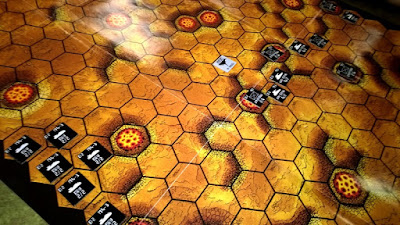 The first game we played The Black Knight scenario from the Ogre Reinforcements set (and also from Scenario Book 1, I think). I played the Combine forces, at the opposite end of the map from my opponent's PanEuropeans. In between, a renegade Ogre Mark III run by a third player. Since the Ogre was closer to me, it headed my way. I gave the cybertank a beating, but between the Ogre and the enemy humans, I was pretty much wiped out. And after I did all that hard work, the human player finished off the Ogre and won the game. 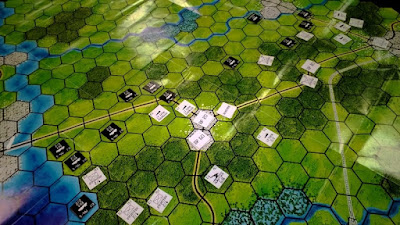 Our second game was the advanced Breakthrough scenario. Two of us took the PE defenders (white counters) while the third player ran the attackers (black GEVs). Note the Structure Point counters, which make ideal camouflage markers atop the other units--something hard to do with the variable-shaped tokens of Ogre Designer's Edition. In this game, the attacker remained spread out, and could never muster enough force (thanks to some abysmal dice rolls) to break through our defensive lines. He ended up losing all but one of the GEVs.

A good time, getting back to the basics of wargaming.
Posted by Desert Scribe at 9:55 PM 4 comments: 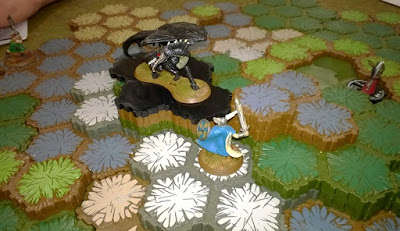 A few weeks ago, I brought out The Fantasy Trip (actually just Melee and Wizard) for a quick battle on game night. I decided that our four figures who had survived the Death Test last December got ordered to bring back a dragon. So we had our 37-point characters take on a four-hex dragon (the black spaces beneath it are so we can better tell the creature's facing; otherwise it gets confusing).

It was a hard battle, but in the in the adventures won because the dragon was in a cavern and couldn't gain altitude. Looking back, I should have had it charge and knock people down, instead of just using claws and breath. I may have to run this again sometime.
Posted by Desert Scribe at 9:51 PM No comments:

Gaslands getting into gear

After months of idling and a few weeks of spinning my wheels, I finally took it into overdrive and ran a game of Gaslands. There were six of us, all new to the game, so it took a while for us to start firing on all cylinders. We played the Death Race scenario, but since we were unfamiliar with all the weapons and perks, we just treated all our vehicles as cars with front-facing machine guns. We had four of my vehicles in the race: the car Jake, the pickup Elwood, the dump truck Overkill, and a repainted Batmobile. Another player brought his Arkansas hillbilly-mobile, and the sixth member of our group brought the green military-looking SUV. 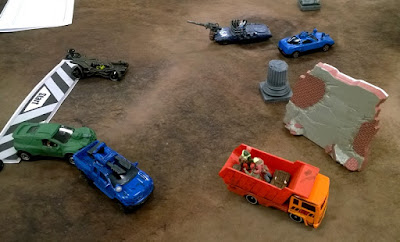 It took a little while to get used to using the movement templates and the skid dice, but after a few gear phases we had the game mechanics down. There were a few collisions, and a number of wipeouts, but we were all bad shots, and no one actually wrecked. We liked the resource allocation decisions: Do you shift gears and add more hazard tokens so you can move again, or keep it slow and steady so you don't wipe out? 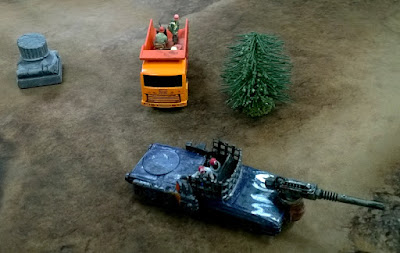 Unfortunately for this blog, I was so into the game, I neglected to take very many pictures. All in all, the rest of the players said they enjoyed Gaslands and will play it again. Next time, I plan on using teams with all the available weapons and perks. I also want to run a narrative campaign involving a war rig, so I need to get back to the painting table ....
Posted by Desert Scribe at 8:47 PM No comments:

Of frog demons and space stations

A couple of recent purchases arrived in the mail this week, and I thought I would share them with you: 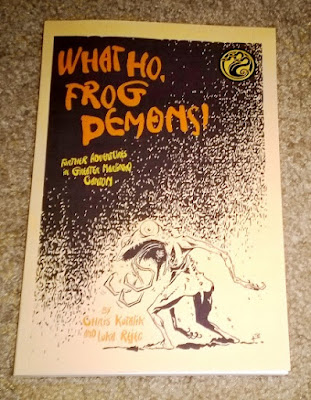 First in my mailbox was What Ho, Frog Demons!, an adventure for old-school D&D by my buddy Chris from the Hill Cantons (read more about this product on the blog). I don't think our tabletop group did much more than march past the pre-publication version of this dungeon, and the book itself has a lot more packed than even the campaign players saw, with some great art. My favorite is Preved!, the War Bear who likes to shout his own name. 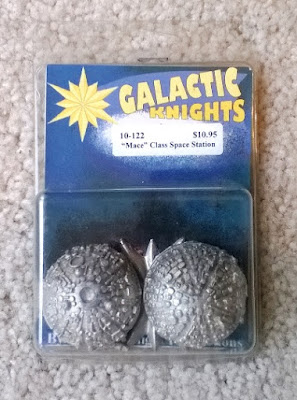 I also received this Mace-class space station for the Terran fleet from Monday Knight Productions. This will make a nice objective for the next time I play a game of Starfleet Wars or Galactic Knights, and I'm looking forward to painting it up.

Anyone else get anything cool lately?
Posted by Desert Scribe at 2:01 PM 6 comments: