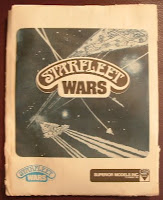 Starfleet Wars came out in 1978, and it's a pretty safe bet the game and miniatures were a response to the blockbuster success of a certain science fiction movie the previous summer.  There were two ways to purchase the game:  in a box with the rules, five Stellar Destroyers (one from each fleet),  a reference chart, and a pad of ship record sheets for $15, or the rulebook alone for $8.

The title page indicates the rulebook was written by Wayne Smith and designed and illustrated by Ron Spicer (whom I believe also designed the starship minis).  The rules themselves are pretty sparse: a sixteen-page 8-1/2-inch by 5-1/2-inch booklet.  Since the table of contents takes up one page, and the two-page center spread is dedicated to stats for the ships, you've only got 13 pages of text to deal with.  There's another two-and-a-half pages of fluff, and since there's also six pages of advanced rules, that means the basic game is covered in about four-and-a-half pages of rules.  The turn consists of power allocation, simultaneous movement, shooting, and determining damage.  Since "offensive, defensive and speed factors use power units in relation to the square of the factor desired," the math-challenged might want to have a calculator handy.  In addition to the basic move-and-shoot, the rules offer advanced features such as defensive screens, tractor beams, and fighters.  I've never actually played this ruleset, but you can find out more in the Starfleet Wars entry at BoardGameGeek, including this comprehensive review.

Interestingly, the rules only supplied statistics for five types of starships: the Stellar Destroyer, the Stellar Cruiser, the Galactic Battlecruiser, the Galactic Attack Carrier (fighters, while in the rules, didn't need their own line of stats), and the Galactic Dreadnought.  But the publisher, Superior Models, would soon produce more starship types and provide rules for them as well.
Posted by Desert Scribe at 11:01 AM

Although Superior only covered five fleets, I recently managed to create a SIXTH one by messing with the batting order of the Carnivorians. The first Carvivorian ships tended to all have the same "Klingonesque" neck and tail structure. But just before the line ended, Superior added a new series of Carnivore ships that were more rounded. In the current SFW campaign I'm running, the rounded ships now comprise the Aslani Fleet (essentially the Aslan from Traveler, as seen here: http://www.rafm.com/Merchant2/merchant.mvc?Screen=PROD&Store_Code=RAF&Product_Code=RAF07016&Category_Code=GRAV) while the more jagged ships represent the Vargr (http://www.rafm.com/Merchant2/merchant.mvc?Screen=PROD&Store_Code=RAF&Product_Code=RAF07015&Category_Code=GRAV). We split the MAATAAC armor so that the Aslan got the Carnivorian units while the Vargr got--the TERRAN units. And what do the Terrans have? Heck, they get MEKTONS! (http://www.myrnnyx.com/mecha/r1006.jpg)

I like how you incorporated some Traveller into your Starfleet Wars, splitting the Carnivorans into two races. What do you do for stats?

And giving the humans mecha is another nice touch. Your campaign sounds really fun.

The Superior guys actually made the process pretty easy by redoing the Carnivoran Fleet about halfway through the line.

The Aslan have the following lineup: Polecat (SGD), Hellcat (GD), Tomcat (BC), Puma (CA) and Cub (DD). I boosted the Pumas overall power points and gave the Cub the same stats as the Cheetah. Their fighter is the Leopard. They have no carrier--I played off the similarity of the Polecat to the Galactica and gave it carrier capabilities.

The Vargr lineup is: Jaguar (SGD), Tiger (DD), Lion (BC), Panther (CA) and Cheetah (DD). The Jaguar was boosted to match the Entomolian Swarm. Their fighter is the Bobcat. They get the Den as a carrier.

The Humans got mecha because, well, we had to get our stuff in there somewhere. And it turns out that the Mekton line is a pretty good match for the MAATAAC main tanks. I also felt that the mecha gave a distinctly different feel to the Terrans. For the smaller MAATAAC robots, I decided to use some robots from the Stargrunt line http://www.groundzerogames.co.uk/store1/html/images/68A.jpg. Not a bad match.

The actual races mostly came from RAFM's reprints of the old Games Workshop Traveler minis-- but since there were no figs for the Entomolians, I used these guys http://khurasanminiatures.tripod.com/t1210.jpg from Khurasan's 15mm line. The Aquarians were covered by using these guys http://www.stanjohansenminiatures.com/images/15mm/15mm9.gif from the Stan Johansen Space Opera line. Wrote my own stats for these- I'm a game designer, so it's allowed (LOL).