At long last, the newest addition to my merchant fleets is complete: This decommissioned warship is now being used as a mobile prospecting base and processing facility.

Originally a Federation attack carrier built by the Valiant Enterprises shipyards, this vessel was commissioned during the Third Interstellar War and served for more than two centuries after that conflict ended. 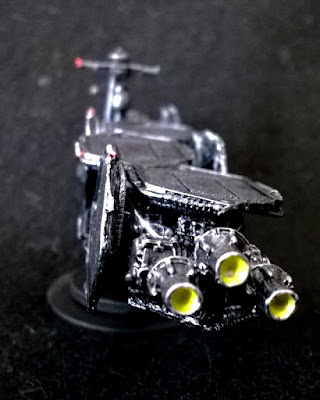 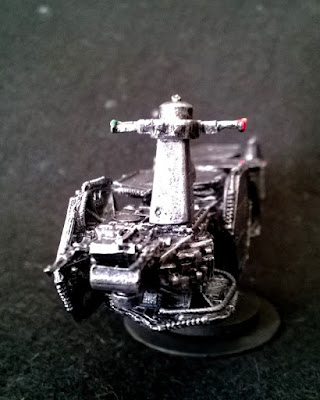 The starship still retains the fore-mounted twin railguns, which have been modified to accelerate small ore shipments into transfer orbits. 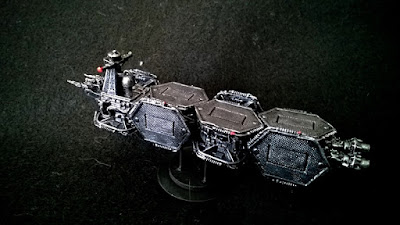 This is a neat model, but I can't say it was fun to put together. It came in four hull sections that I had to pin together to make sure they didn't come apart, and the various superstructure pieces and landing pads. The latter were problematic because they did not fit cleanly, and it took a lot of scraping to fit them into their slots. 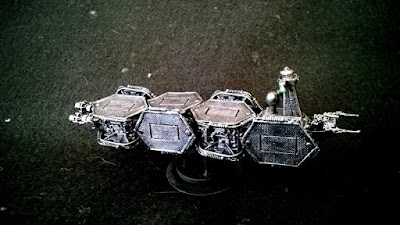 Still, that's one more mini (and a spaceship, even!) that's done, and it will make a nice target for raiders in a future scenario. Till next time!
Posted by Desert Scribe at 12:26 AM

Email ThisBlogThis!Share to TwitterShare to FacebookShare to Pinterest
Labels: At Least One Miniature A Week, civilians, galleries, Stardate: 3000

Such a great model and a fine job painting it.

Second the sincere... Model looks great!! Also, nice photos. No really. The photos show you have a great eye. Are you using a camera phone, or do you have a digital camera?

That is a brilliant mini and backstory for its current state.
Looking forward to the paint job.

Looks great! The little touches like the position lights really sell it.

I like this one a lot, and it is begging to be used in a scenario!

great job , man i love your site. thats a very hard build , glad to see it on the site. old school rule..

Thanks, everyone! Can't wait to use this in a scenario. (And yes, I took these photos with my eight-year-old phone.)