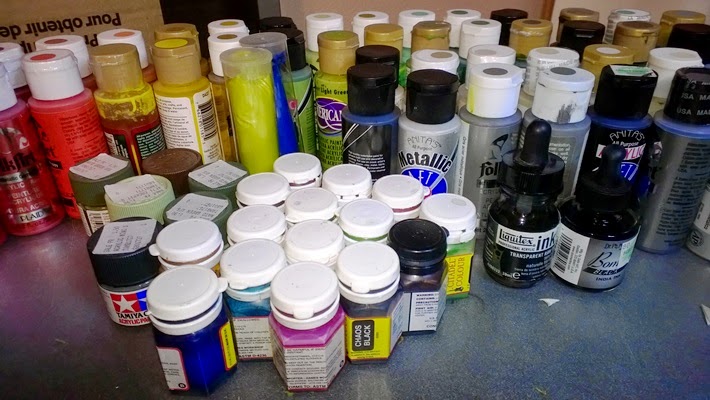 This guest post on Painting Matters: In Defense of Hobby Standards over at the Chicago Skirmish Wargames blog has generated a lot of discussion (as well as a fair amount of butthurt).  In it, the author argues that playing with painted miniatures is a hobby standard that gamers should embrace. Sure, not everyone has time to slap paint on their figures, but I agree that fielding an army that isn't  bare metal should be a part of the wargaming experience.

Just the other day, I was at my local game store and there was some kind of Warmachine/Hordes game day or tournament event.  I'm not really into that system, but it does have some cool-looking models.  However, at the store, it looked like half the players didn't have their forces painted.  Which was a shame, because there were also some nicely painted armies on the tables.

Now, I will never refuse to play an opponent who has unpainted minis--it's hard enough to find someone to game with as it is!  But still, most of the folks I play with have painted miniatures, and usually enough for both sides in a battle.  In fact, I can only recall once (at a Hordes of the Things tournament) where someone didn't have a painted army.  While I thought it was a shame that someone couldn't field a completed army, especially for a game like HotT that encourages creativity, I kept my opinion to myself.

So this post isn't to tell you that you're wrong for not playing with painted figures, but instead to encourage you to field a painted force.  For skirmish games it's simple: just get some cheap prepainted minis from the secondary market and you're good to go.  No need to retouch, but rebasing those Clix minis will make a world of difference.  And it works for other games as well.  That's how I built one of my HotT armies.

I'm not a great painter (tabletop is my standard), but with my spaceships I found a quick way to get them on the table: prime black, and then drybrush with various shades to bring out the model's details.

With larger units that you have to paint, it takes a little more time.  But a basecoat followed by other colors to pick out different parts of the figures will get you enough detail to withstand scrutiny at arm's length.  And remember, an ink wash followed by a quick drybrush is your friend.

Or, if you have more money than time, send those castings off and pay someone else to paint them.

However you end up doing it, if you work a little bit at a time to coat those unadorned bits of metal and plastic, you'll end up with a sense of accomplishment and a nice looking army.  So just paint!
Posted by Desert Scribe at 10:46 PM

I don't think I've ever played a game with unpainted miniatures - but then again I'm typically providing both sides and terrain and therefore have complete control over this!

Seriously, though: if you don't find delight and a sense of satisfaction in painting your figures then maybe pre-paints or cardboard counters would be more appropriate? A lot cheaper, too...

I'm sure Warhammer and Warmachine could be played like standard board wargames... cardboard counters or blocks. No shame in that. I like chit-n-hex games too. But that's just not a 'hobby' to me... no creativity or craft involved, which are a HUGE part of what I enjoy about it.

Maybe it's just me, but I would never bring unpainted minis to a games table.

Unfinished - that I have done. But totally bare? Or even just undercoated? Nope. Can't do it.