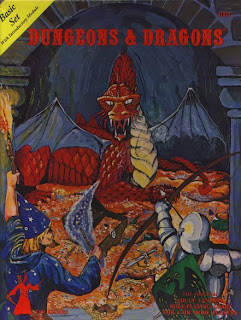 Awhile back, I created some expanded wandering monster charts for the Holmes version of the basic Dungeons & Dragons boxed set (pictured at right).  That's the version of the game I started playing with, and it still has a special place in my heart.  These days, there are quite a few others who look back fondly on this edition of D&D (also known as the "blue book" version, for the monochrome azure version of the box art on the rulebook), and some of them are still playing this version after all these years.
One thing, though--the original D&D basic set was aimed at neophytes, and it only covered the first three levels of character progression.  Although the book's monsters section had plenty of more powerful opponents (such as dragons and vampires), the wandering monster tables on page 10 only covered dungeon levels 1-3, with monster strength concentrated at the less powerful end of the spectrum (orcs and skeletons).

Over on Dragonsfoot, someone with the screen name Meepo posted The Holmes Companion, a four-page expansion to the blue book rules that takes characters to 9th ("name") level and beyond.  That way, you can watch your characters progress from 1st-level dragon fodder to Nth-level legends, all in the same ruleset.  Since there are now rules for upper-level types, I figured The Holmes Companion needed some wandering monster charts that take advantage of all the monsters the book, including the high-level denizens of the dungeon.  So I fit in almost every monster from that edition, along with a few surprises based on the Companion.  In a shameless play on nostalgia, I used the same font and formatting as the Holmes work, but expanded the tables to reach all the way down to the ninth dungeon level:﻿
﻿I hope this ends up being of use to someone.  I think I will employ these tables myself to stock a dungeon, along with the Holmes rules, Meepo's expansion, and material taken from the version of B2: The Keep on the Borderlands that came with the Holmes boxed set.  In the meantime, enjoy the expanded wandering monster charts.  Please let me know if you find them helpful.
Posted by Desert Scribe at 6:04 PM

Do you have this in PDF?

Nice table. Holmes edition is what I started with, too, and I still have a fondness for it.

Very cool. Thanks for posting.

Generally, I'd like to see more human NPCs on the lower levels. This was a feature of early D&D Wandering Monster tables, including the two different tables in the Holmes 1st print and 2nd print (removed in later prints).

Thanks, Z! I couldn't find it on your website; you mind posting a link here?

I see your point regarding character classes. Although I have a copy of the second printing, I was using the third printing as a template for my tables, so no humans other than bandits and berserkers on the lower level tables.

I might have to do a revised version to get some of those warriors, adepts, seers and footpads in there. :)

Sure, here's the link for the main page:
Zenopus Archives

ZA: Thanks for steering me over here.

Nice job, Desert Scribe. It's nice to see another blogger from the area.

ZA: Thanks for steering me over here.
Desert Scribe: Nice job! Also, it's nice to see another blogger from the area.

Thanks, Theodric! Always good to hear from another local. You do much gaming around here?

I've done some Pathfinder Society playing, but while that's fine, I'd prefer the kind of gaming that happens with a regular group. A couple of friends joined me to try to get a regular campaign going (S&W Waterdeep as mentioned on my blog), but this has had trouble lately due to their work issues.