Search for the Emperor's Treasure

Weekend before last, I got together with Chris and Brad for a little retrogaming.  Chris trotted out Search for the Emperor's Treasure, a nifty little game that originally appeared in issue 51 of Dragon Magazine. 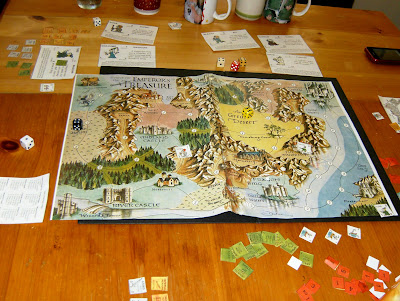 It had been close to three decades since I'd played SftET, so it was like playing an entirely new game.  The idea is to move your character around the map, acquiring treasures and resolving encounters.  The game ends when a certain number of the emperor's treasures have been found. Whoever ends up with the most goodies wins the game. 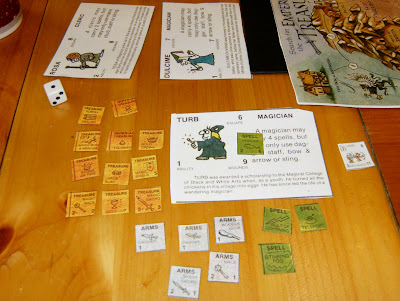 The fun thing about the game is that if you draw an encounter that doesn't aply to the terrain you're in, you can play that encounter on another player who is in that terrain.  A drawback is that a player can camp on certain locations and keep searching for treasure (that's how I ended up winning--you can see all my bling in the picture above).  Still, we had a good time playing, and even talked about building a large game board for use with miniatures at the next South Texas Mini Con.  Then Chris pointed out this giant version of the SftET board, and I decided I could never do as good a job.

UPDATE: Head on over to the Hill Cantons for Chris's take on the game.
Posted by Desert Scribe at 9:08 AM

Email ThisBlogThis!Share to TwitterShare to FacebookShare to Pinterest
Labels: OSR, Search for the Emperor's Treasure

I was glad we got to play, I had put it together almost literally a year ago for my birthday and it's just been sitting there burning a hole on my shelf.

I had a lot of fun playing though the camping thing was even worse than I remember as a kid, probably because we weren't savvy enough to just sit there and do that.

A simple house rule can probably fix it though.

Don't be dissuaded by that giant board, they added a lot of locales. It would be a fun project that I wouldn't mind pitching in for. Maybe we could run it at North Texas RPG Con?

I'm up for it if you are. I already have some ideas on what we could use to represent the various locations in three dimensions.

Great that you guys had a good time. And Happy Birthday to Cake.