The making of Starfleet Wars

BLOGGER'S NOTE: Scott R. Spicer (credited as "S.R. Spicer, Lt., TFSF"), along with his father, Ron Spicer (R.E. Spicer, Lt. Commander, TFSF), developed the Starfleet Wars miniatures line for Superior Models.  As you probably know if you've read this blog before, the SfW universe contains five starfaring factions, each with a distinctive design style.  Curious about the origin of this game and its minis, I emailed Scott Spicer about his work on these spaceship models.  He was gracious enough to reply to my inquiry, and his response follows in its entirety (pictures added by yours truly):

Well, it has been quite a long time since I ‘cut my teeth’ on Star Fleet Wars.  It was my first professional model making experience, 1977, to be precise. Like every other industry, Star Wars was a huge influence on how and what to market to current and potential customers. Star Fleet Wars was Superior Models’ answer to competing in the Sci-Fi war-gaming market.

Superior Models was owned and operated by a very impressive person by the name of John Carter. John was a man borne in the wrong era. When he dressed for special occasions he liked to carry a sword cane and wore a Bowler hat.   In fact, he brought a sword cane to my wedding, as well as a pocket Derringer.  John was a brilliant man and had a photographic memory.  Because of that, he loved to debate anyone on any subject and could site the most obscure facts word for word, to prove his point.  When challenged, something my wife quickly learned was futile, he would instantly produce his source material, turning effortlessly to the exact page and paragraph from memory.

John purchased the company about 1960 or so, not sure, and changed the name to Superior Models. The company quickly established itself as a manufacturer of high quality waterline ship models in 1:1200 and 1:2400 scales for WWI & WWII, pre WWI Dreadnoughts, ironclads, etc.  They also produced highly detailed and exacting models of WWI- WWII artillery, tanks and figures. The sculpting of these figures is when my father Ron Spicer became involved with John, Superior Models and a subsidiary called Perth Pewter. He produced a lot of work over the years in military, Sci-Fi figures, fantasy figures, and a number of animals and characters from The Lord of the Rings when that animated film became popular.

I can still remember the smell of vulcanized rubber and melting pots, the sound of the molds being slapped together for talc and the spin casting machines, like it was yesterday. I was a very young kid when I first went with my father to deliver his sculpts to John. The Spin casting machines always scared me because they whistled loudly when the air pressure was let out of the lines.  John always performed the ‘trick’ of dipping his finger into the molten pot of lead and not getting burned! I didn’t know then how important John and Superior would become to me, but I went on to apprentice there when I turned 16, learning the production processes and eventually creating masters. I couldn’t have asked for a better place to learn than there.  John was an excellent teacher and friend.  It was right about then the idea for Star Fleet Wars came along. 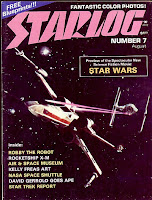 Star Wars hit with a vengeance!  Everyone took notice, and tried for a piece of the proverbial pie. Now, John was a long time Sci-Fi fan and, having read and kept copies of Star Log and the like, Star Wars was all the prompting he needed to put his own ideas into molten metal. He recognized many of the themes from past Sci-fi stories and the Genre that even Lucas admits were an influence. John gave me some of his copies of Star Log to read so I could discover those same influences. (I wish I still had them. Like everyone else, time and moving has found them lost.)

John did not want to just copy Star Wars.  His idea was to expand it a little and make it into a ‘war game’. He came up with the idea of the five different ‘worlds’. We know them as Carnivorian, Terran, Avarian, Entomalian, and Aquarian. Anybody remember the different worlds of the Xindi from Star Trek Enterprise (hmmm……..)?

It was my father’s task to visualize these worlds in the form of concept sketches and drawings. He was still a commercial artist at the time and building a reputation as a sculptor, so the concept drawings were something he could have a lot of fun with. I remember meetings at our home discussing the concepts and going over sketches and doodles to get the basic 'world looks' down. My father then developed the ideas and sketches into firm designs. As a result, all of the artwork you see on the packaging and booklet covers and inside the rulebooks was designed and created by my father.

Star Fleet Wars started out with the basic class ships every naval war-gamer is familiar with, battleships, dreadnoughts, carriers, destroyers, etc. Each world had the same types of ships. (I do not know how the rules of play were developed, not my job!) Alls’ I know is that it was a hell-of-a-lot of fun to work on. Each world has distinguishing design elements so that they would not become boring. You can look at the line and see the differences. We had to keep straight which turrets, hull shapes and gun barrels went to which world. That was not too difficult as there were at least three of us going over the masters for any errors.

The first part of design for the space ships was the hull shape. It is easy to guess that the Terran ships would be influenced by the Imperial Star Destroyers. The insects would have ‘pincers’ on the prows, the reptilians would have lots of spheres on the hulls, the cats would have cat’s eyes and the suggestion of paws where ever possible and turrets that have ‘ear-like’ radar dishes on them. The birds would have a ‘head & beak’ configuration for the bow and some kind of ‘airfoil’ shape to the hull.  These shapes were cut out of solid brass sheet stock, no thinner than 1/16”. Sometimes they were thicker, depending on the design of the hull. When TESB played in theaters, I remember John saying that we have to add larger ship classes to reflect Vader's SSD, 'Executioner'. That is when the Super Galactic Dreadnought was borne.

I cut all of the hulls out of brass using a jeweler’s saw and a small precision band saw. Once cut, I refined the shapes using a flex-shaft Dremel and grinding burrs.

Because of the many models and sub-components that John produced for his own and other clients’ products, we had an endless source detailing parts. We would take train parts, battleship turrets, superstructures, hulls, and tank bodies and on and on it went, to deco our ships. We also had an endless supply of punched out steel & brass shapes from a local manufacturer that John knew.  These little steel shapes were about .025” thick and ranged from .062” dia. to .250” dia. We had other shapes to use as well, triangular, oval, etc. We called it ‘sprinkling the gingerbread’ on the masters.  That is what makes these models sparkle so. Every surface had to be detailed, sides, bottom, etc. Any undercuts had to be filled with Epoxy Steel or A+B Epoxy clay. This is where things could get tedious. These masters had to be reviewed for any undercuts that would trap and tear out rubber during casting. It could take a while on a complicated ship to go over it and add material where necessary. Once the epoxy was added, it had to be baked to cure quickly enough to be able to get right back to work on it.

Remember that these worlds, as mentioned above, were carefully designed to be unique and work together with the other worlds.  All of the sketches were refined into working drawings. My father was in charge of creating all of the masters as well. I was apprenticing on this project so I did not have free reign to do as I wished. We started off with the dreadnought of each class. Once the hull was cut out, as mentioned above, the bridge and superstructure shapes were place on the hull and arranged until we liked what we had. Then the different turrets & details were added. Nothing was epoxied in place yet. Once the top of the hull was completely decorated, we removed everything and laid it aside in its relative positions. The bridge & superstructure shapes were then epoxied into position. Once cooled, I placed all of the other details as we had laid them out. This first ship would be our guide and each successive ship would then have the same characteristics of equipment arrangement. We did the same process to the underside of each ship as well. Once I became familiar with the design of each world, I would lay out one of the smaller ships. That may sound like too much work for gaming miniatures but that is what made the line so attractive, it was designed, not just thrown together. These same steps were taken for the MAATAC line as well.

The Star Fleet Wars line did well for John and Superior Models & Perth Pewter. I learned a lot about the design and production process and was given a chance to actually produce master patterns for the buying public. That experience is not something that your average 16-17 year old can get. I owe a great deal to John and wish he were still around to talk to and debate.

This is why I follow this blog! Secrets of shipbuilding from an actual professional model-maker. Thanks DS for a great post.

Many thanks to Cmdr.Spicer for writing down this history, and kudos to you for sharing it. Wonderful stuff.

That's a fantastic story, and a nice piece of gaming history. Good work!

I still have a complete set of models from superior. Great story behind the great memories. I remember not playing much, but collected them just because they were so cool and intricate.