So last week marked the third anniversary of the Hill Cantons campaign.  To commemorate the event, my wife and I brought a cake to today's game session.  Just for fun, we decided to adorn the cake with some plastic figures I happen to have laying around the house. 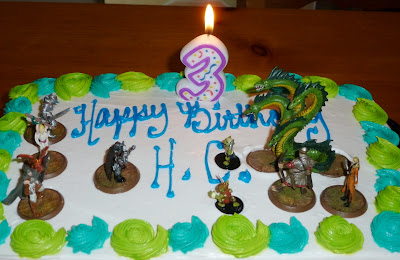 Also, since the grocery store decorates it for free, we got them to write "Happy Birthday H.C." on the pastry (we were in a hurry and figured "birthday" is easier and quicker to spell than "anniversary," and we didn't want to cause confusion by having them write out "Hill Cantons").  Here's a shot of the writing: 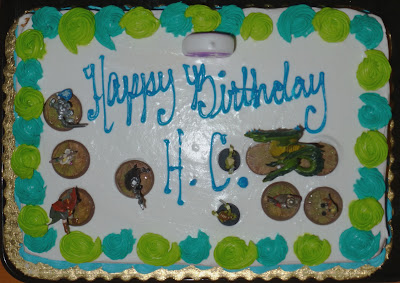 The session itself was fun, except that we got into a fight with a whole bunch of Eald who did not want to give up and rolled incredibly well, while every player at the table could have rolled a six-sider instead of a d20 and probably gotten better results.  They wore us down, but we prevailed in the end, although it cost the NPC cleric his right foot. 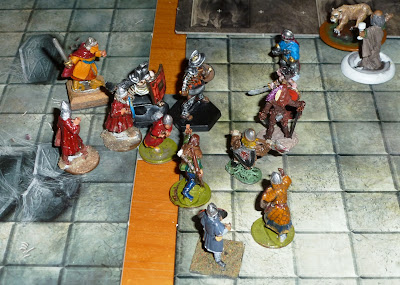 By the way, that cheetah mini at the top is not to scale--it actually represents my magic-user character's familiar: a tabby cat named Steve.  Yeah, those are the kinds of rolls we made.  Anyway, Happy Birthday to the Hill Cantons, and thanks, Chris, for running the campaign.
Posted by Desert Scribe at 10:36 PM

Email ThisBlogThis!Share to TwitterShare to FacebookShare to Pinterest
Labels: Dungeons and Dragons, inspiration