Look what I got in the mail last week--some more figures from Citadel's old Nightmare Legion boxed set: 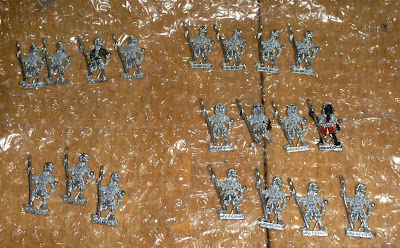 These troopers will join their brethren as additional Spears elements in my Hordes of the Things army of the same name.  In addition to the rank-and-file, the auction I won included the command figures and a few more skeleton minis.

The 19 halberdiers are enough for four stands of Spears, leaving three extra figures--almost enough for a fifth element of Spears.  I have another three figures left over from my original set, so that's enough for nearly six new elements of Spears.  And if I include a standard-bearer, that leaves me just one figure short.  By the way, the reason I want to have an even number of this element is because in HotT, a second rank of Spears adds a combat bonus to the Spears element in front of it.  Therefore, six new elements is better than five, which means I need another figure or two.

I thought about using the standard-bearer that came with the Nightmare Legion, but that won't really work; he's got the banner in his left hand and facing the opposite direction of the troopers, who all carry their weapons in their right hands.  If I put him on the same stand as the troopers, he won't really fit, but will look like he's about to walk into the other troopers. So I figure I can use another old GW figure I have lying around, like the one to the right.  I'll have to remove the sword, drill out the hand and scratchbuild a banner, so I might just try to find another trooper or two online.  We'll see. 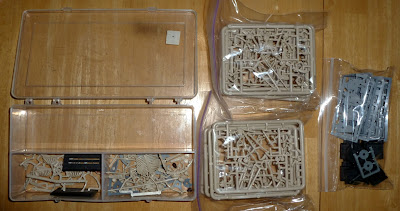 I'm not sure what I will do with the command miniatures yet.  And in addition to all the metal figures, the package included a number of plastic skellies--and not just infantry figures.  If you look closely at the plastic box, you can see some skeletal cavalry along with a skeleton chariot.  I also need to figure out how I will use them with my Hordes of the Things army.
Posted by Desert Scribe at 9:04 AM

Email ThisBlogThis!Share to TwitterShare to FacebookShare to Pinterest
Labels: Hordes of the Things