We finally returned to the Hill Cantons this weekend, our first tabletop campaign session since before Thanksgiving.  There were five player characters: a thief, magic-user, druid, amazon fighter and a "fighter" with some thiefly abilities.  We also had two secondary characters (fighter and cleric), an animal companion (wolf as played by the leopard mini) for the druid, our longtime henchman, a newly hired man-at-arms, a new porter, a new and very nervous torchbearer, and our usual twin brother teamster team, along with seven horses and two mules (we had to leave the wagon when the trail got too rough).  Seemed like we had a half-mile-long train when we had to go single file.

We had so many people, we actually ended up using one of the corridor dungeon tiles as a movement tray as we explored the cave complex we were searching for.  We didn't know what to expect, so we brought lots of help. 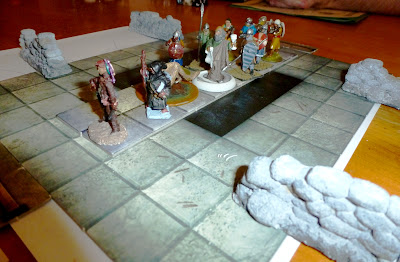 Turns out we didn't need it.  When we finally located the demon-guarded treasure we sought, only three of our party went to take on the infernal creature.  We dispatched it relatively easily thanks to a Chime of Banishment, but the cold spirit that appeared when we tried to take the treasure literally froze one of our party members in his tracks.  We still managed to get away with the loot and all our characters, so it was a successful, if crowded, run.
Posted by Desert Scribe at 9:02 AM

Email ThisBlogThis!Share to TwitterShare to FacebookShare to Pinterest
Labels: Dungeons and Dragons

Sounds fun! I'm a big fan of using minis in my D&D games.

That photo cracks me up, I do not exaggerate these days when I say you have a small private army in tow. Have to post my own photos.

Haven't played D&D or related games in, well, decades now, but when we did (quite a lot back then!), we always used figures; no arguments about who's standing where!