A tale of two tables

(or: Linked Games at Chimaera Con) 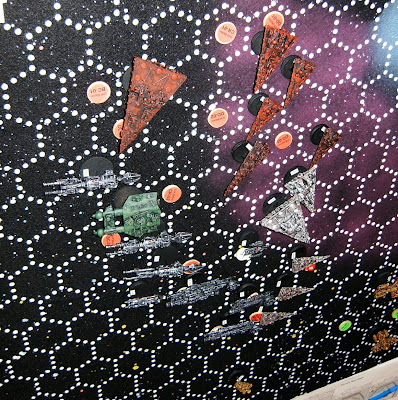 Since I had fun running my first-ever convention game at Millennium Con back in November, I wanted to conduct another game at this year's Chimaera Con.  For a long time, I'd had the idea of running linked scenarios on two separate tables, with play results on one table affecting events in the other game. 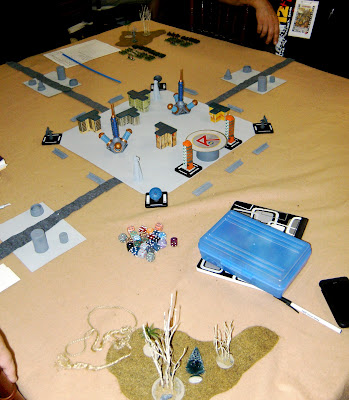 I got together with Chip (da Baron), who agreed to run the groundside part using Future War Commander.  I would run Galactic Knights for the topside portion.  The concept was to have space forces trying to land more troops to take a landing area and capital city on a besieged planet.  ﻿ 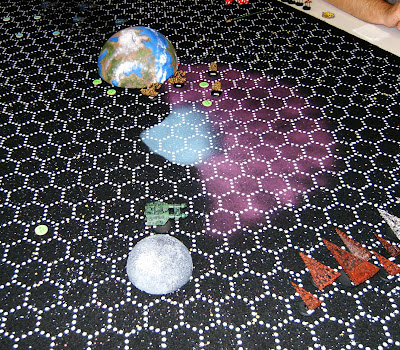 Never one to let background material go to waste (it pays to recycle!), I decided to make this game a sequel of sorts to the MillCon scenario.  Here's how the summary read:

After its initial invasion failed, the Terran Transsolar Federation decided to take by stealth what it couldn´t take by strength. On the surface of Regulus IV, a small unit of Terran infiltrators captures the Nova Liberian spaceport for Terran reinforcements to land. Meanwhile, in space, the Nova Liberian revolutionary star guard must hold off the invaders´ transports to prevent more troops from flooding into the capital.
Instructions

The surface and space battles will take place at the same time on two separate tables. The chance to provide supporting fire like orbital bombardments or surface-to-orbit missiles mean players´ choices on their own table will affect the combat on the other table. Just make sure you communicate with your allies!

EDIT: Here are the scenario's special rules and the order of battle.﻿ 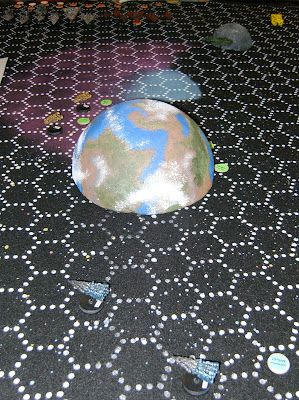 From orbit, capital ships could conduct planetary bombardment and fighters could make strafing runs.  From the planet, laser towers could rip anti-starship blasts into space and ECM interfered with ship-to-ground communications.  In addition, massive shield generators protected the city and its emplacements. (for more details, see below)


Although outnumbered, the defenders did have a surprise waiting for the invaders--a battlecruiser hidden on the lunar surface that emerged just as the attackers entered the system. 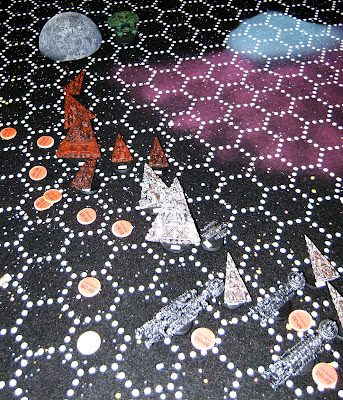 Meanwhile, the attackers had some forces already on the ground--but they would need reinforcements from orbit to take the city. 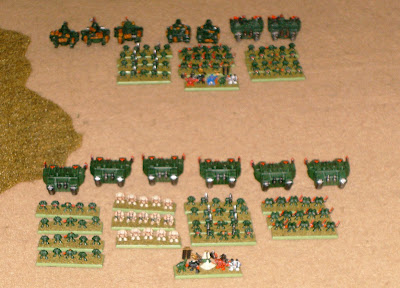 The rebel battlecruiser (green) immediately thrust toward the Terran warships--and the fragile transports coming in just behind them. 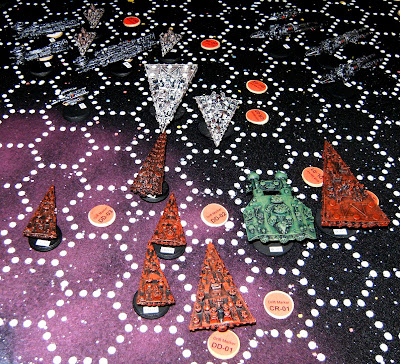 On the ground, jammers sparked to life, garbling communications between the attackers in space and on the surface. 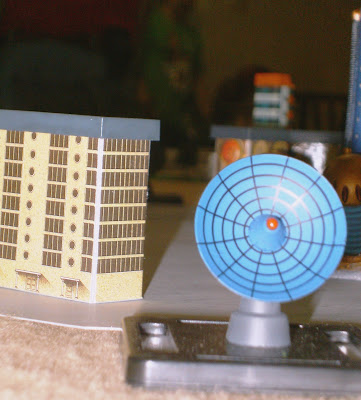 Meanwhile, the remaining defenders streaked from near orbit (Ochre Squadron) and from distant orbit on the far side of the planet (Azure Squadron), but it would be a couple of turns before they could join the battle. 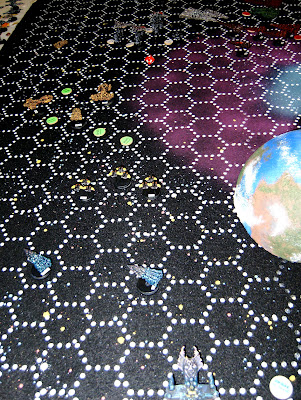 Since it was their home turf, the defenders had plenty of armor, both the tracked variety and walkers, occupying their capital. 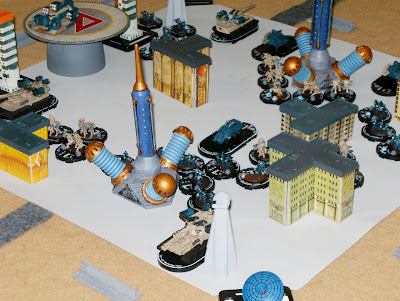 Since the defenders knew they had to take out the transports in order to disrupt the invasion, the secessionist battlecruiser ignored the Terran Red and White Fleets to gun for the metallic transports. 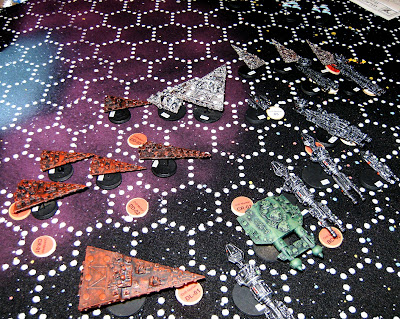 The BC sacrificed itself, but lasted long enough to knock out the engines on a couple of transports, meaning they could not land (and one was even headed on a collision course with the planet). 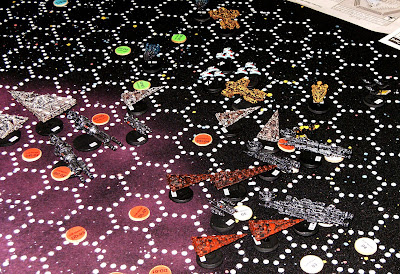 By this time, the remaining Nova Liberian ships had joined the fray, concentrating on the incoming troop ships while taking a pounding from the Terran military vessels.  The defenders also had a trio of nine-fighter squadrons lauching one per turn from a nearby orbiting asteroid outpost. 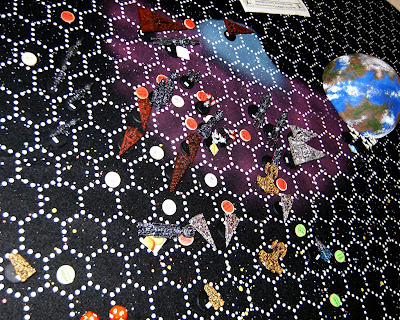 But by this time, the Terrans had begun to approach the planet, and the warships would soon be in range for orbital bombardment. 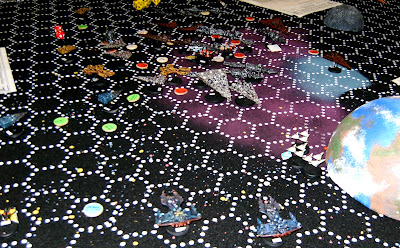 The NLs sent some of their fighters in for a strafing run, but the attackers drove them off or shot them down before they could line up for their attacks. 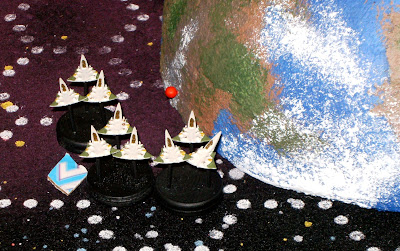 The Terrans had launched their own fighters, which they used to protect their transports from more of the marauding defenders' fighters. 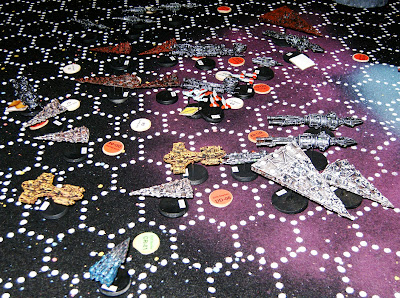 Finally, the attackers reached orbit!  A squadron of Terran fighters went in to attack defensive emplacements on the ground, while a pair of transports prepared to enter the atmosphere.  But before they could land, laser fire from the surface took out the engines on one of the cargo ships, leaving it stranded in orbit.  Meanwhile, Terran interceptors (at far left) chased the remaining Nova Liberian attack craft back to their asteroid base. 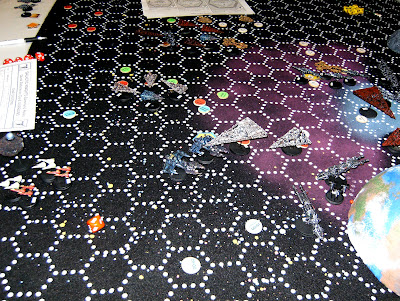 By this point, the Terrans had lost half their transports--one destroyed outright, and five without engines, drifting off into space.  A seventh cargo ship lost its FTL drive, so it wouldn't be going home, either. 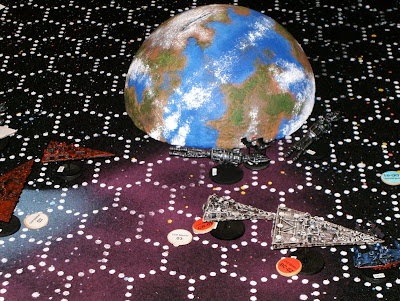 By this point, the defending Nova Liberians were all heavily damaged, with at least one of the remaining ships adrift without engines.  That on top of the lost battlecruiser meant the rebels were losing the battle in space.  Unfortunately for the attackers, without reinforcements from orbit, the ground commander could not dislodge the emplaced troops from the city and ordered a withdrawal. 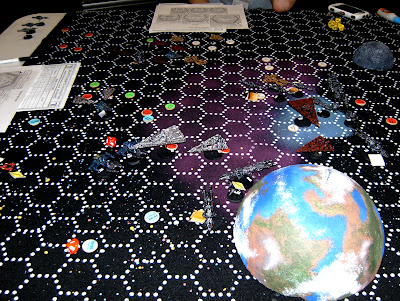 So the ﻿defenders were left with their space fleet in tatters, while the invaders were unable to take their objective.  This translated to a marginal victory for the rebels--but the Terrans are sure to return, probably in time for Millennium Con XIV in November ....
Posted by Desert Scribe at 2:47 PM

Great report. How did the players on the two tables find the interface between the ground battle and the space fight? Did they pay much attention to the other table?

I find that in a large multiplayer game I don't really notice much apart from my own bit and maybe the folks just to my flanks. Anything further away than that just doesn't register.

The funny thing is, I almost always win my bit of a large game, but my side always loses overall!

Thanks, Caliban. Frankly, I was hoping to see more interaction between the two tables than what actually happened. We had a couple of notes passing back and forth--things like "We need air support!"--but that was about it.

I think if I had designed the scenario better, so that space forces could reach the planet on the first turn instead of taking five or six rounds to get there, we would have seen more of the dramatic tension I wanted to create.

I think you should try the Full Thrust and Dirtside as they are
made to interface...Also give
the planet something like the
Ion cannon from Star Wars, that knocks a ships systems off line for a turn or two.
I think that will force both the ground and space table to interact a bit more.