In a comment about my expanded wandering monster tables for the Holmes version of Dungeons & Dragons, Zenopus noted that I didn't include any nonplayer characters in the charts (early printings of the blue book, echoing the original D&D rules, had character classes such as warriors, seers, adepts and footpads among the table entries).  While I said I'd maybe churn out some revised tables, I haven't done that yet.  However, that suggestion did inspire me to create a few additions to the monsters available for Holmes.

As you can see, these monsters are inspired by the additional character classes Holmes mentions in the Additional Character Classes section of the book.  While they share names with the archetypes available for the white box rules and Advanced D&D, I statted these up as opponents using the other monsters in the basic rulebook as a template.  Basically, I'm creating these new monsters based on the information that would have been available to the 13-year-old version of me after I first received the boxed set--so these entries don't necessarily reflect the classes found in the AD&D Players Handbook.  Instead, they're based on literature and pop culture of that era, along with a dash of The Holmes Companion. 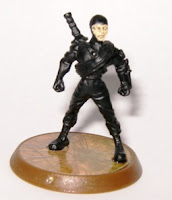 These fanatical killers (known as ninjas in the Far East) inflict double damage when striking from behind and have all the other abilities of fourth-level thieves.  Assassins wear leather armor; their high dexterity (16) gives them a +1 on their Armor Class and means they usually strike first in combat.  These killers are typically armed with missile weapons in addition to hand-to-hand arms, but they never use shields.  On rare occasions, an assassin will use blowguns to shoot poison-tipped darts, but this requires special permission from the guildmaster.  Assassins usually operate in groups of one to four, but can be found in greater numbers in their stronghold, usually a fortress in a remote area.  The stronghold of assassins in the service of a higher cause will be led by an EHP, while that of killers for hire will be led by a master assassin with 9 hit dice who strikes from behind for quadruple damage and has all the other abilities of a ninth level thief.

Druids are spiritual leaders and keepers of mystic wisdom who often serve as advisors to local warlords or champions.  Druids may use any two first-level spells and any two second-level spells (magic-user or cleric) per day.  A druid will always carry a magical staff (1-3=Staff of Striking, 4-5=Snake Staff, 6=Staff of Healing).  When defending the territory of his people, a druid will be accompanied by one or two heroes (4th level fighters) and 10-100 normal men followers.  There are tales of an archdruid who presides over all other druids with nine hit dice who can cast any three first-, second-, third-, or fourth-level spells (12 total) per day.

Illusionists are masters of escape and misdirection.  If tied up, shackled, or otherwise bound, they can escape their bindings in 1-10 rounds.  They can cast any six of the following spells once per day: Dancing Lights, Ventriloquism, Audible Glamer, Invisibility, Knock, Levitate, Mirror Image, Pyrotechnics, Rope Trick, Water Breathing, Confusion.  In addition, with at least one day of preparation, an illusionist can duplicate the effect of a Massmorph spell.
Posted by Desert Scribe at 6:51 PM

Aweseome! Creative approach for some new opponents. It makes the world more mysterious if there are spellcasters that aren't available to players as classes.