The Siege of Monopolis at MillCon 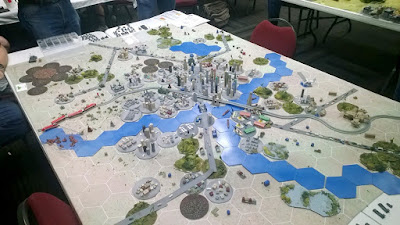 OK, now that Thanksgiving is over, I have a chance to tell you how my Siege of Monopolis scenario for Ogre went at MillenniumCon on Veterans Day weekend. Turnout was great--seven players had preregistered, including my brother, and we ran into an old gaming acquaintance from our hometown and convinced him to fill the eighth and final slot. Other players were a mix of those I knew, those who had played Monopolis the last time, and those new to the game. In addition, another wargamer buddy who is one of the convention organizers was able to play some reinforcements toward the end of the game, giving me nine players! 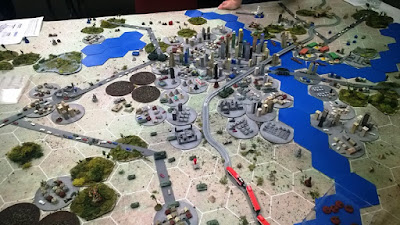 The scenario used the Ogre Designer's Edition hex-and-counter rules, but with miniatures, 3-D terrain, and a few tweaks and custom units. The map was my four-inch hex mat from Corsec Engineering. The terrain came from cardboard beer coasters, model railroad landscaping supplies, and Monopoly game pieces. The railroad track and train (which ended up not playing a part in the game) came from Micro Machines. 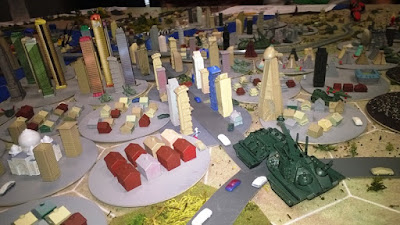 Three players operated the green forces defending the city of Monopolis. The other five played the gray attackers. Each side had a mix of cybertanks, conventional armor and infantry, custom units, and cruise missile crawlers. Oh, the cruise missiles. Each side also had objectives to seize or to hold, which each player drew from a deck of cards with photos of the targets. One of the participants on each side was designated the commander, and drew an extra objective. The players were free to assign objectives as they saw fit. I didn't expect the players to achieve all their goals; the idea was to force both sides to make tough choices. I knew I got it right when one of the attackers remarked that he didn't have enough infantry to take his assigned objective. When I told him, "Don't blame me, blame your generals," he replied, "I spent 24 years doing that." 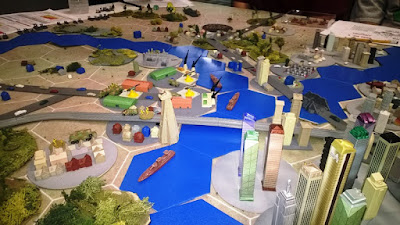 The actual game started later than I wanted to. Part of that was on me--I should have started setting up an hour before it was scheduled to start, but I went with my brother to grab lunch at a restaraunt he liked. I began putting out terrain thirty minutes before start, but it took awhile to get everything on the table where it was supposed to go. I will say that having players help out by adding scatter terrain such as trees and cars is a nice way to draw them into the game before play even begins. But part of the delay was the attackers taking waaaaaay too long to get their forces on the board for their first move.

Anyway, once play finally began, combat ensued. I took my playtesters' advice and started the attackers closer to the city, so the shooting started on turn one. On the west side of the map, there was a small town on the road to the city that the defenders had garrisoned with infantry. It's worth noting how well infantry perform in cites that even the Ogre Mark V decided to detour around this urban area and shell it from nearby, rather than chase the squaddies through the streets. The fire from the cybertank and other support units damaged the town, but didn't budge the infantry. The attackers also launched a cruise missile from a crawler, but it got shot down before it could detonate. 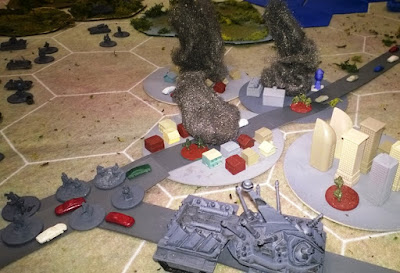 Meanwhile, on the eastern edge of the board, the remainder of the attackers came in, where they were met by armored boats (a custom unit of mine) and learned that in a battle where tactical nuclear weapons are part of the standard loadout, it's not a good idea to bunch up. I'm wondering if the armored boats, with two separate attacks, are too overpowered. Maybe I should dial them back some. More playtesting is needed, but I digress. 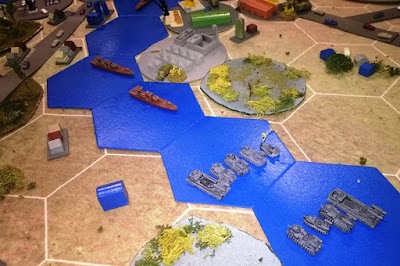 Once the attackers were done with their turn, the defenders responded, moving up Ogres and other units, and launching a cruise missile of their own. Now here's the interesting thing about the Ogre rules: Cruise missiles in this game are very destructive, harming terrain out to six hexes away and some vehicles out to five, but they are also vulnerable to attack by just about everything on the board, including infantry. In the several scenarios I've run that include cruise missiles, most are either shot down or the crawlers are destroyed before they can launch. As mentioned above, the attackers attempted a nuke, but the defenders (who had laser towers) managed to destroy it. 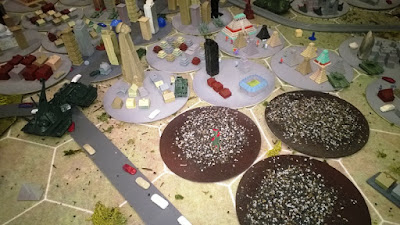 The same thing happened here: The attackers shot down the defender's cruise missile, nearly as soon as it cleared the crawler. No big deal, except the rules for cruise missiles state that if one gets shot down, then the player who launched the missile must roll a die. If it comes up a six, then the warhead detonates. Guess what happened, just one hex from where the missile was launched? That's right, the defenders nuked their own city! In convention games, I house rule that a nuke destroys terrain up to four hexes away and damages it up to six hexes. This saves time rolling attacks for each hex like you would by the book, but it still took a while to replace all my just-placed city tiles with rubble markers. It also left me running low on steel wool smoke markers to indicate damaged town hexes. 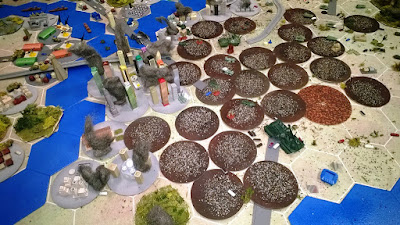 Adjudicating the attacks on the defenders' units that weren't destroyed outright by the blast took some time as well. It was amusing to watch the player who had launched the cruise missile roll the attacks on all his own side's infantry, armor and Ogres. The attackers weren't laughing quite as much when he got to roll against their units that were too close to the blast, but they didn't take as many casualties as the defenders. The blast, in that location, took us all by surprise and probably changed the outcome of the game. 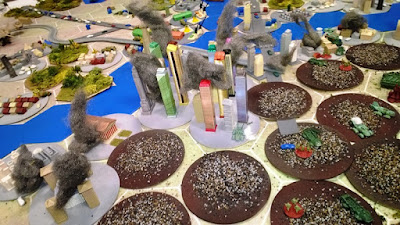 The attackers had brought in another cruise missile crawler from the west, but one of the river boats or another defender managed to take it out before it could deliver its nuclear payload. The city forces seemed to be having an easier time over here on the river and by the docks--probably because they didn't get a strategic nuclear warhead dropped on top of them. 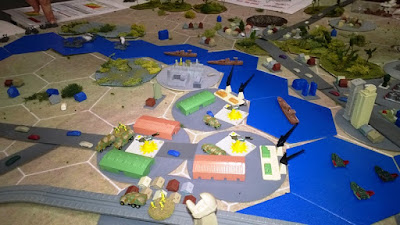 Time was running short after only two turns, so as referee I made a judgment call and allowed the defenders to bring in reinforcements (I had originally said they could start rolling to see if they get reinforcements on a later turn, but it was getting close to the ending time). The reinforcemnts consisted of my own kitbashed Ground Effect Ogre and four Redtail GEVs. Holdfast, one of the convention organizers who was walking around taking pictures, accepted my offer to command this force. 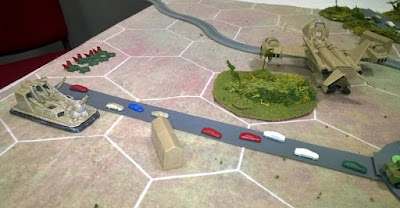 The GEOgre and its escorts traded potshots with the attacker's Fencer-B and various GEVs, while wheeled trucks shifted infantry from place to place. 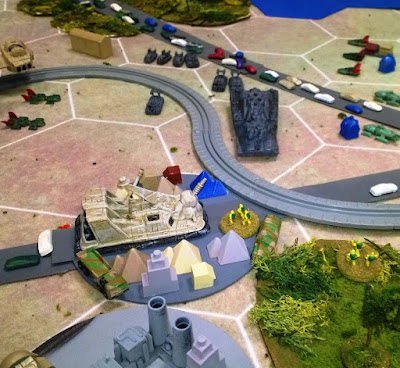 The docks took some damage, as the Fencer proceeded toward its objective, 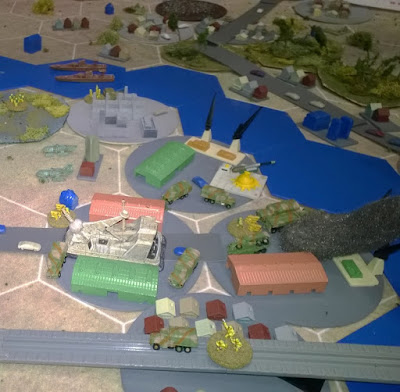 Meanwhile, on the west side, the attackers were pushing the defenders back into the smouldering parts of the city that were still standing. 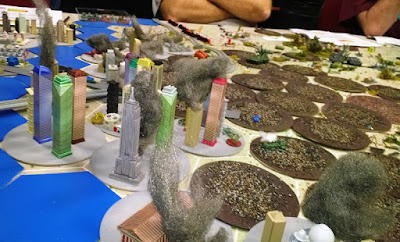 The attacking Fencer was damaged, but it kept on rolling. 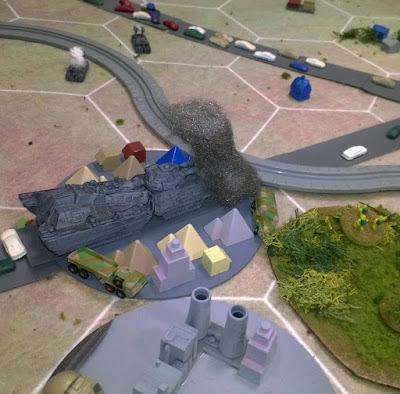 The defending cybertanks, which were damaged by their own side's nuke, attempted to stop the attackers' Ogre, but served mostly to soak up damage. 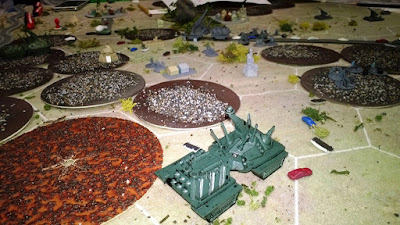 There were just too many attackers now, and the defending armor no longer had buildings to hide behind. The attacking Mark V led the charge against the defenders' Mark III-B. 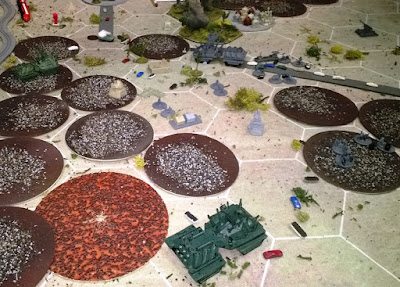 Turns out the Fencer had a plane to catch, parking itself at Pennybags Intercontinental Airport, which was the objective assigned to that player. 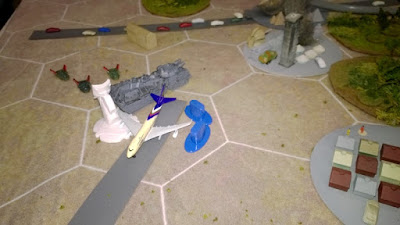 As the game neared completion, we had the requisite Ogre overrun. The smaller III-B charged the Mark V, and ended up worse for wear with all its weapons destroyed and the bigger cybertank still functioning. 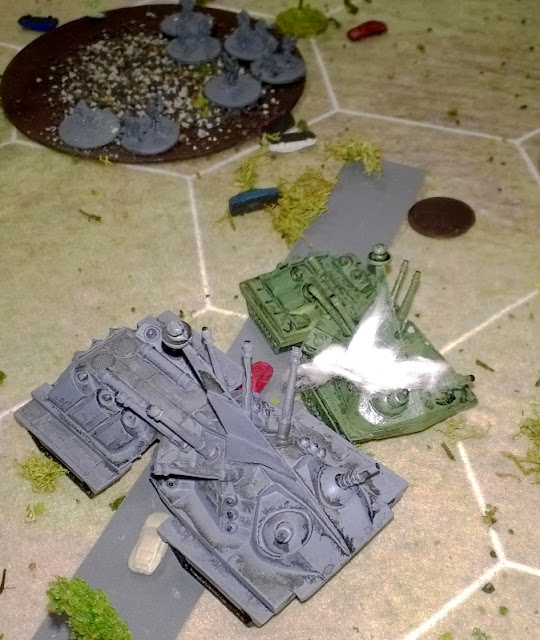 Meanwhile, the GEOgre and the armored boats were in range of the airport, preventing the Fencer from achieving its objective. Other attacker objectives had been destroyed by the nuclear blast or remained just out of reach. 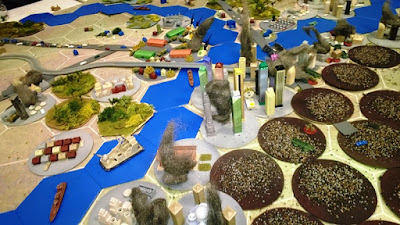 The defenders still held two objectives, so as the game ended, they won a marginal victory. However, if we'd had time to play one more turn, the attackers probably would have achieved some of their goals. 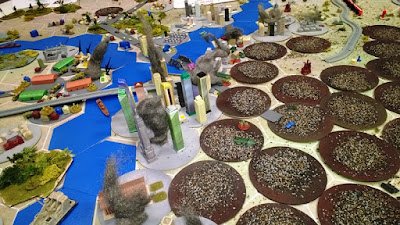 All in all, it was a good time for me, and I think for the players as well. There's certainly more I can do to speed up the game next time I run it, and I need to tweak the forces a little more. I hope I can do this scenario again at MillCon next year, and I hope the players want to do it again too.
Posted by Desert Scribe at 8:30 AM

Layout looks super - the exploding warhead certainly changed the complexion the game from the outset!

Nuking your own defences on turn 1 can't be good! I'm somewhat surprised that the defenders managed to scrape a win, even if that was only because time ran out.

nice write up! ogre is fun. marking those ogre data sheets as you take damage or launch missiles reminded me of battletech.

Howdy! I really enjoyed the game. Since I also live in Austin we discussed getting together some time. I was the fellow who brought his own minis and lead the defending team.

Hey Jeff! Good to hear from you. We definitely need to play some Ogre. Send an email to desertscrb via aol dot com

Super set-up! I bookmarked this post when I came across it last year, and have come back a few times to keep meditating on it. Today, I took the plunge and ordered a couple of sets of Monopoly City pieces and a gigantic lot of basic houses and hotels from EBay. I suspect we may not get the Ogre Miniatures Kickstarter until the end of the year at the earliest (port backlog in Shanghai won't likely be untangled til the end of Q4). But this summer will be a good time to start getting a head start on prepping a big game mat and terrain while I can spray paint outside.

The convention cycle here in New England is busy in the first half of the year. So, if the minis are running late, I won't be able to get event submissions in for the 2018 cons. But can do some test runs at the club and definitely hit 2019 conventions.