Some ship worth fighting for (or over) 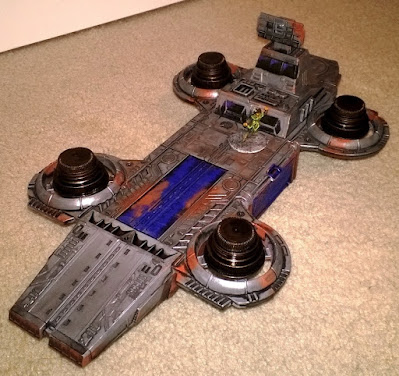 Remember the spaceships for my space war? I finished repainting and modding this one a couple of weeks ago after gaining some inspiration from watching crafting videos from Wyloch's Armory. 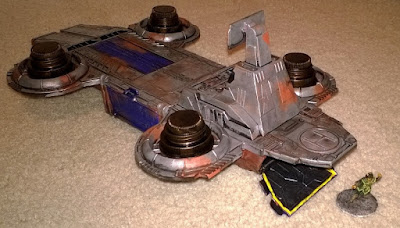 What was once a Space Union vessel is now the Kaye MacGuoyo, a short-distance sublight cargo hauler that is impractical for most spaceship gaming but very useable for a sci-fi skirmish, such as Stargrave.

Whether hiding behind or in it, figures can take advantage of this spaceship's port and stern hatches, along with a flat dorsal deck suitable for storing more cargo or for tactical use as combat positions. 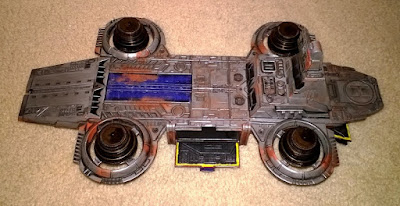 The 'Uoyo lacks any FTL capability, such as a Bachman-Turner Overdrive, instead relying on its four Neerglaw pseudogravity caps to reach low orbit for in-system planetary hops. 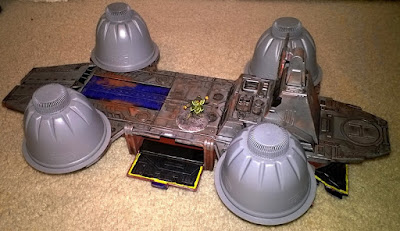 (I originall had this ship outfitted with larger, more cumbersome éloD agrav units, but I prefer the sleeker look of the smaller engines.) 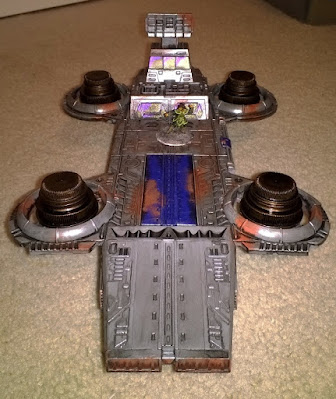 This was a pretty easy piece to make game-ready. I just unscrewed the top and bottom parts and spraypainted them (brown bottom, grey top), then drybrushed and washed (thanks again to Wyloch for inspiring me to get this finished). For the engines, I popped out the propellers from the nacelles, glued together these engines made from pill and tea plastic bottle caps, painted them metallic brown, and attached them. 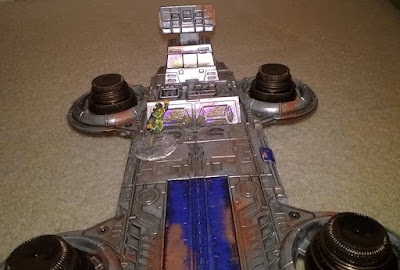 I painted the windows will some color-shifting black paint, then some color-shifting white in the upper left corners. Some orange paint dabbed on for rust here and there, and now this piece is ready for us to fight over, fight for, or fight from.
Posted by Desert Scribe at 9:59 PM

Rather a cool addition to the fleet! Wyloch is a fun channel to watch.