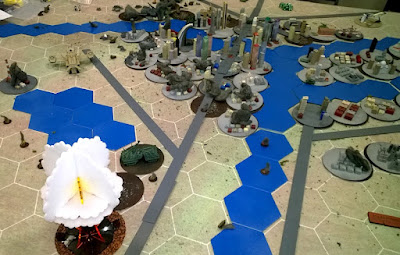 After a year's (enforced) hiatus, I will be bringing my Monopolis setup back to MillenniumCon this year. Monopolis, of course, is my big Ogre/GEV minis setup. As the event description says:

The year after the Great Plague, the peaceful City of Monopolis rises above the rubble of the Last War, a gleaming center of commerce and industry. But no peace lasts forever. Now invaders march to conquer the city while outnumbered defenders scramble to protect their home. This is a custom scenario for Ogre/GEV, using the official Ogre miniatures (and a few original units) on a large hex mat with 3-D terrain. With room for up to 8 players, you and your friends can aid in the defense of the besieged city--or help the invaders conquer it. Fight in the Siege of Monopolis!

As the game convention has expanded to start on Thursday, I chose the Friday afternoon slot for my game. Looking forward to attending this game convention again, and I hope to see some of you there!

Posted by Desert Scribe at 4:26 PM

Thanks for the link, Losfer! Are you planning on coming to MillenniumCon?

I'm not sure yet - I start a new project Thursday, so I don't have a clue what the vacation policy and time-off will be on the client side. If I can, I will make it!!